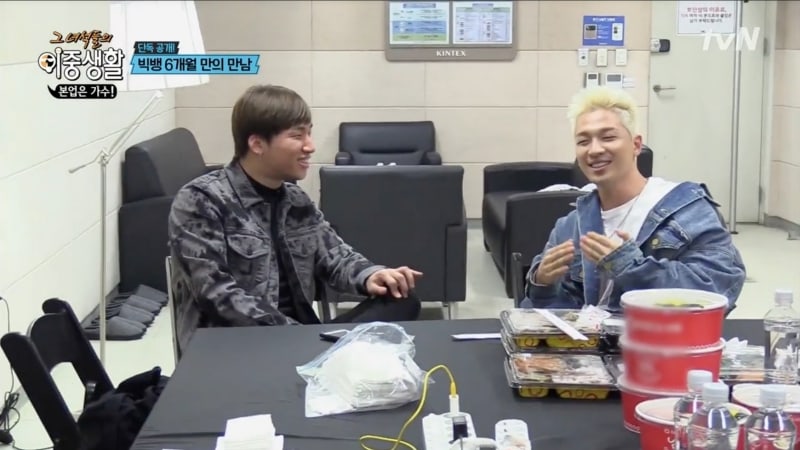 Watch: BIGBANG’s Taeyang And Daesung Discuss Enlisting In The Military Together

BIGBANG members’ reunion after six months of solo tours and promotions was shown on the November 30 broadcast of tvN’s “Livin’ the Double Life.”

“Livin’ the Double Life” is a variety show that documents the lives of musicians Taeyang, CL, and Oh Hyuk on and off the stage.

Due to G-Dragon’s solo tour in Europe, Daesung’s solo tour in Japan, and Taeyang’s solo world tour promotions, the members met up for the first time in six months. Taeyang joyfully walked into rehearsals and caught up with Daesung and Seungri.

Daesung was surprised to see cameras and a filming crew in their dressing room and asked Taeyang about the show. Taeyang explained to him that the show documents musician’s “double lives” and then laughed saying he himself isn’t quite sure what the show is about.

Daesung said, “I think I’m going to enlist next year, but you can’t go unless there’s an opening right?” to which Taeyang asked, “Isn’t there a way we could match [the enlistment] dates? Let’s match them up and go together.” 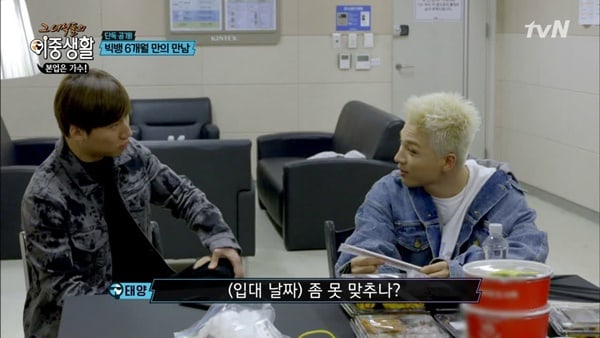 Daesung was in favor of the idea while the team’s youngest member, Seungri, sat silently listening to the conversation and bit his nails presumably thinking about his own upcoming enlistment.

Then, the four BIGBANG members, minus T.O.P who’s carrying out his military service, rehearsed for their upcoming concert and had fun joking around with one another. Watch the clip from rehearsals below!

BIGBANG
Daesung
Taeyang
Livin' the Double Life
How does this article make you feel?