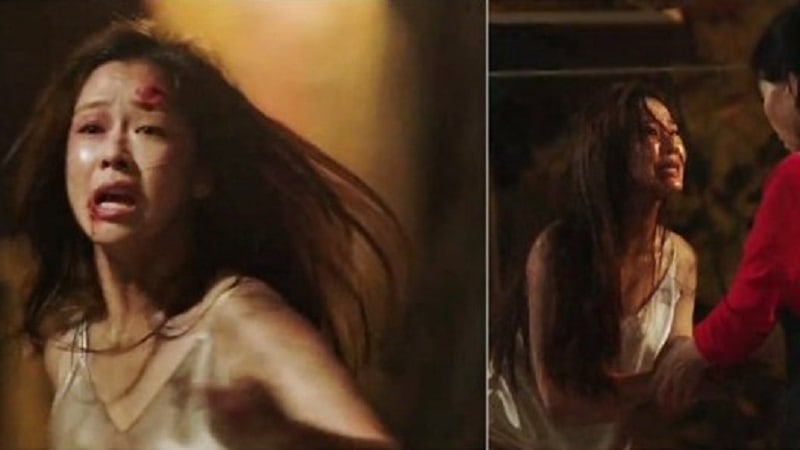 JTBC’s Friday-Saturday drama “Untouchable,” which has captured viewers’ interest from its first week of broadcast, has released stills of Kyung Soo Jin running barefoot in search of help.

“Untouchable” aired its first episode last week and showed detective Jang Joon Seo (played by Jin Goo) dealing with the sudden loss of his wife Min Joo (played by Kyung Soo Jin). Joon Seo later learns that his wife’s real name is Yoon Jung Hye and is shocked to discover that his wife kept her identity hidden and intentionally approached him. As Joon Seo uncovers the mark of death on his wife’s body, he becomes suspicious of his older brother’s involvement with the death.

In the newly released stills, Kyung Soo Jin runs down a dark alleyway in the middle of the night. Kyung Soo Jin wears a thin nightgown, while her face and body are covered with scratches and blood. Kyung Soo Jin runs with the urgency of someone being chased, raising interest in the scary situation she is in.

Once she runs into someone, Kyung Soo Jin grabs their hands as she begs for help. Her face is covered in tears, and another photo shows her crouching down while clutching her mouth.

The final image shows the word death carved into Kyung Soo Jin’s shoulder, blood visibly dripping from the tattoo. Many are curious about this tattoo, along with the past related to her death.

The scene captured in the stills was filmed this past September in Busan. Kyung Soo Jin filmed near the harbor that day and gave her best effort, despite wearing just a thin nightgown in the chilly weather. Kyung Soo Jin captivated the drama’s staff with her portrayal of Yoon Jung Hye through her close attention to details from her gaze to her presentation.

The staff from “Untouchable” shared, “Jung Hye’s shocking past will be revealed on this week’s broadcast. It will cause another stir. It will reveal a different, shocking side to Kyung Soo Jin, who showed herself as Jin Goo’s mysterious wife last week. Please look forward to it.”

“Untouchable” is an action drama that follows the diverging paths of two brothers, Jang Joon Seo and Jang Ki Seo. The drama will air its third episode on December 1 at 11 p.m. KST.

Kyung Soo Jin
Untouchable
How does this article make you feel?