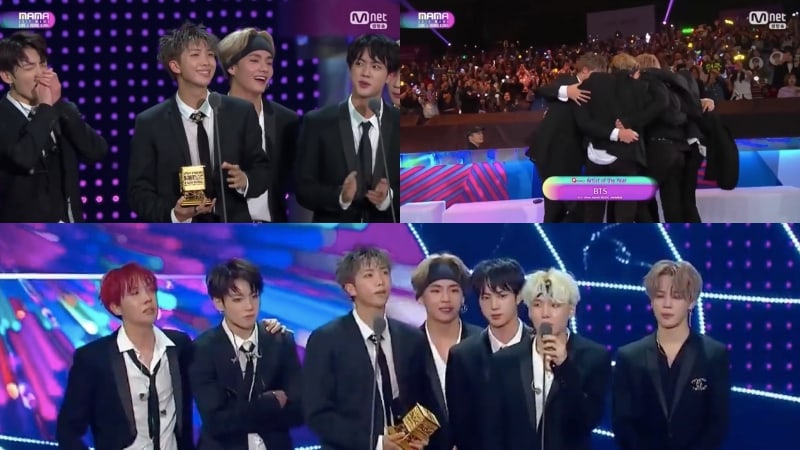 BTS has been named Artist of the Year by the 2017 Mnet Asian Music Awards (MAMA)!

On December 1, the final ceremony of 2017 MAMA was held in Hong Kong at the AsiaWorld-Expo. BTS took home awards for Best Music Video (for “Spring Day”), Best Asian Style in Hong Kong, and also Artist of the Year, one of the year’s daesangs (grand prizes).

This is the second year in a row that BTS has won the Artist of the Year award, after they received their first MAMA daesang in 2016.

Since that time, BTS has had a truly amazing year in which they reached many new milestones and set records both for themselves and for K-pop groups. They first released their hit repackage album “You Never Walk Alone” in February before embarking on a world tour, and went on to release the mini album “Love Yourself: Her” this fall. The mini album has broken sales records on Korea’s Gaon Chart and its title track “DNA” earned them their dream of entering the Billboard Hot 100. They also received the Top Social Artist award at the Billboard Music Awards, and recently became the first K-pop group to perform at the American Music Awards.

When they accepted the Artist of the Year award at 2017 MAMA, leader RM first took to the microphone to happily shout out, “ARMY! We love you!”

He went on to say that wherever BTS goes in the world, they receive a warm welcome, but that people are always even more curious about their devoted fans. “We would never have received that warm welcome and those honors if it weren’t for all of you,” he said. “Thank you so much. And I think the words ‘Artist of the Year’ really confirm it. We aren’t sad or in pain anymore. We’re confident and proud!”

See also: Here Are The Winners Of The 2017 Mnet Asian Music Awards (MAMA) In Hong Kong

Suga then said, “I feel like we’ve experienced all of the honors a musician can receive this year, from the Billboard Music Awards to the American Music Awards to staging the final performance at MAMA. I think this has all been possible because of ARMY. I want to say once more, thank you and I love you.” He then added in English, “Love yourself, love myself, peace.”

RM later posted to Twitter, “Sorry to forget to say my words in English!!! The glory is all yours. Only you guys deserve this. Thank you so much for all the love. You make me love myself everyday. truly.”

Sorry to forget to say my words in English !!! The glory is all yours. Only you guys deserve this. Thank you so much for all the love. You make me love myself everyday. truly. #aRMy

Watch their win below!