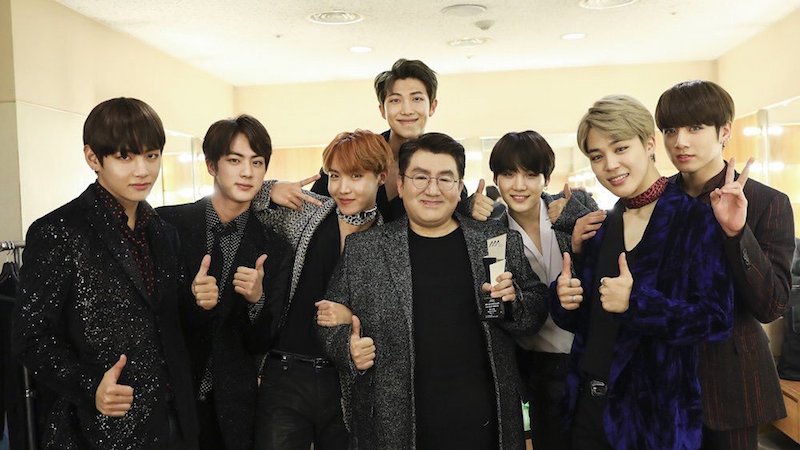 Bang Shi Hyuk recently talked about the success of BTS and the future plans of their agency BigHit Entertainment in an interview.

When asked if he anticipated that BTS would become so successful, Bang Shi Hyuk honestly replied, “I believed BTS would do well. However, I had no idea they would quickly grow like this. This year seems to just pass by [while leaving me] dumbfounded.”

Bang Shi Hyuk was also asked if BTS’s active use of social media was something that was planned. He replied, “It’s true that social media has played a huge role in BTS’s popularity. However, rather than the agency forcing them to do social media, the members voluntarily did it ever since their pre-debut days. During their trainee period, the members of BTS weren’t restricted from using phones. Therefore, just like other young people, they naturally became ‘Twitter maniacs.'”

“Since the members used social media like other people, I think the fans liked it more,” he continued. “It’s the same with YouTube, which is a place where you can encounter the trendiest music. We upload our music and music videos on YouTube, and this is where fans found BTS first. The members gained more fans as they communicated with them in realtime through social media.”

When asked to reveal the main factors of BTS’ success, Bang Shi Hyuk shared that it was a combination of the power of social media, K-pop’s basic characteristic trendiness, and the group’s performances. He also mentioned that the fact that they added their stories into their music contributed to their success.

He said, “When we released ‘I Need U,’ we purposely created a powerful music video because we wanted to show that youth was that painful. When I saw the comments on the music video that was uploaded on YouTube, there were many comments from different languages saying, ‘I wanted to commit suicide, but this gave me strength.’ I think this kind of empathy and communication is the secret to their success.”

When it was mentioned that many people in the industry are interested in seeing what he’ll be doing next following BTS, Bang Shi Hyuk replied, “We are preparing, but we are not at the stage to mention [our plans]. Concentrating on BTS comes first.”

In regards to BigHit’s future goals, he said, “For the second and third [groups like] BTS, we are going to analyze the path BTS has taken so far and create a ‘formula for success.'” Bang Shi Hyuk said that they’re not at the point yet where they could say “If you do it this way, you’ll be successful like BTS,” but that a formula for success will be made similar to how many Korean Wave groups were created while following the formula created by SM Entertainment’s Lee Soo Man when BoA entered the Japanese market.

Bang Shi Hyuk’s formula for success based on BTS so far includes: telling their own stories, maintaining the “principles of K-pop” that allow the transcendence of language barriers (including having good looks and cool dances, and showing talent), connecting with fans through methods like social media, and focusing more on content rather than marketing.

BTS recently took No. 1 on iTunes Top Songs charts with the remix of their track “MIC Drop,” which has also now earned them their highest spot yet on the Official U.K. Singles Chart.