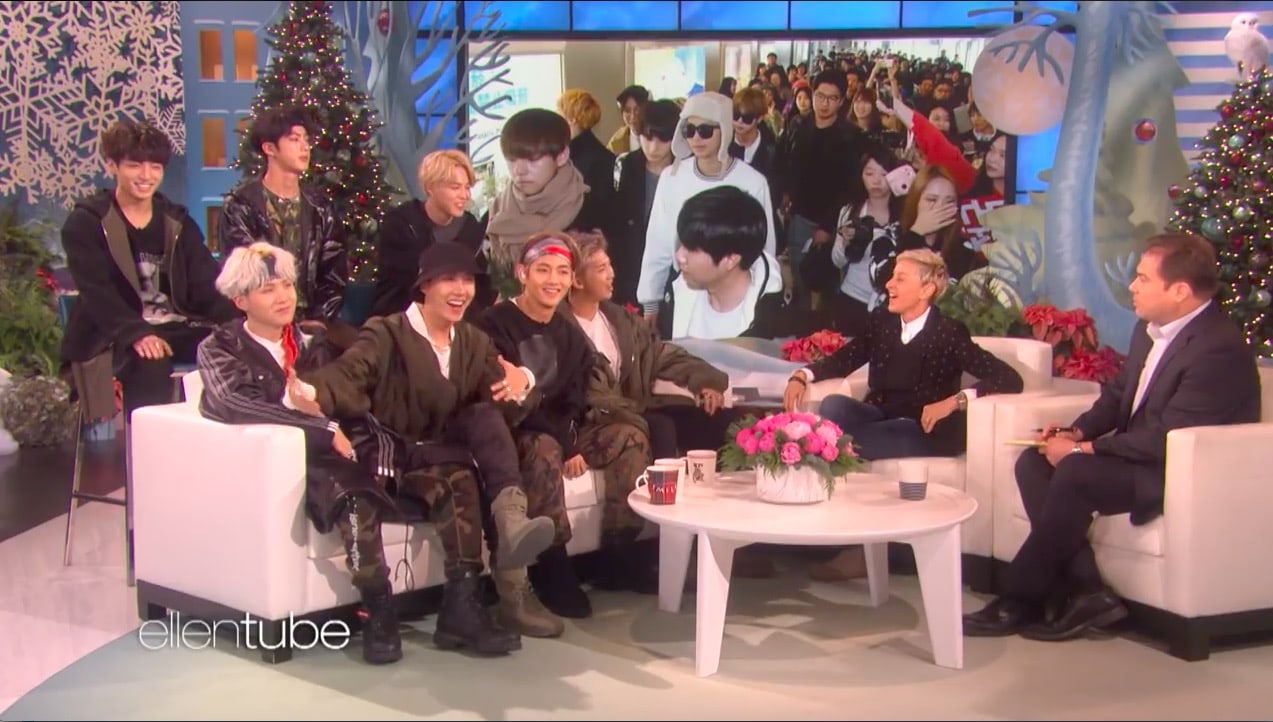 10 Of The Best Moments From BTS’s American Television Debut

Since BTS rocked the American Music Awards with their performance of “DNA” just a couple weeks ago, our seven boys have been the talk of the town! They have further smashed their own record on iTunes charts across the world with the Steve Aoki remix of “Mic Drop” featuring Desiigner, and they sure aren’t stopping there. Their appearances on “The Ellen Show,” “Jimmy Kimmel Live,” and “The Late Late Show with James Corden” were highly anticipated across all social media platforms. But for those of you who may have missed out on watching these talk shows, have no fear! Here are the best moments of BTS’s American TV appearances for your viewing pleasure. Enjoy!

1. Jin and J-Hope’s reactions on Flinch

On “The Late Late Show with James Corden,” there is a segment called Flinch, in which the person behind the glass must avoid flinching when fruit is launched at them. And knowing Jin and J-Hope, you can imagine how terrified they would be. Watch the clip below to see the priceless reactions of two of the biggest cowards in BTS!

Literally, how did he not even move? Or blink? I have no words.

3. Jin continuing his streak of introducing himself as “worldwide handsome” on “Ellen”

Somehow, nothing he does surprises me anymore. To all who meet him, Kim Seokjin is hereby known as Mr. Worldwide Handsome.

So here's Jin proclaiming his throne of being the "worldwide handsome" on his introduction at ELLEN ? #BTSxELLEN pic.twitter.com/1Nruf5f7tM

4. The boys’ faces when Ellen asked if they had hooked up with a fan

Please, just watch it for yourself. It’s too golden to miss out on.

5. The boys’ faces when they surprised fans backstage

So sweet, so pure. Honestly I couldn’t have asked for a better interaction.

You could tell that the members were happy to talk about the significance behind their songs, so good on Ellen! The American public should know that BTS is more than just a pretty boyband with good dance moves.

i live for yoongi's lil smile when ellen told him how he's right about music transcending language, i'm glad she understood bts' perspective on music pic.twitter.com/Ppt75u0fIx

I never thought I’d hear Jimmy Kimmel talking about K-pop with fans of BTS, but here we are! Throughout the video, I was laughing at Jimmy’s comments and applauding the fans that spoke. Nice job, girls!

8. BTS meeting fans and their moms

After talking to the moms of BTS superfans, Jimmy Kimmel invited the mothers to come meet the boys backstage! However, their daughters were left behind, much to their dismay. I’m sure we’re all wondering the same thing here: how to be those moms?!

9. Every performance was lit

Especially on “Jimmy Kimmel,” where BTS practically did a full concert! We should expect nothing less from BTS, after all. If you want to have yourself a fun afternoon, you can find all the performances on YouTube.

10. Best of all, BTS was treated well for every appearance

Thank you to everyone who made this all happen! I think I can speak for everyone when I say that ARMYs love seeing BTS thriving and happy more than anything.

Ellen, Jimmy Kimmel and James Corden gave us quality content with hq performances and quality interviews and interactions. They even made BTS feel so comfortable, appreciated and loved on national television. I hope they get welcomed back again. What a successful US schedule.

Which moment was your favorite? Be sure to let us know in the comments below!