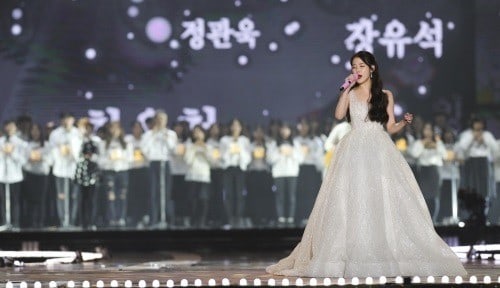 On December 2, IU was one of the many attendees of the 2017 Melon Music Awards, where she won Best Album of the Year, Top 10 Award, and Best Song Writer Award.

The singer-songwriter had a busy year as she released her hit album “Palette” as well as her second remake album “Flower Bookmark 2,” which were both extremely successful.

As the 2017 Melon Music Awards was her first music awards ceremony in three years, IU prepared a special performance. Dressed in a gorgeous floor-length white dress, she beautifully sang “Through the Night” as well as “Dear Name.”

“Dear Name,” in particular, was a significant performance as it was a collaboration with dozens of newly debuted singers, chorus-based singers, and busking singers who have been active but are yet unknown in the music industry. Singers of all ages created a 60-person choir and put on a touching performance with IU. Afterwards, the names of all the participating singers were shown on the screen.

A source from IU’s agency stated, “‘Dear Name’ was one of the double title tracks of IU’s fourth album ‘Palette,’ and IU herself penned its lyrics and chose its title. She titled the song ‘Dear Name’ because she wanted all the ‘names’ worldwide to be the main character of the song. It was an honor to perform at an awards ceremony but IU also wanted to take the opportunity to focus on other ‘names.’ She is happy and thankful that she was able to use this performance to convey her sincerity as an artist.”

IU will be holding end-of-the-year concerts “2017 Tour Concert – Palette” in Cheongju on December 3 and in Seoul on December 9 and 10.

IU
2017 Melon Music Awards
How does this article make you feel?