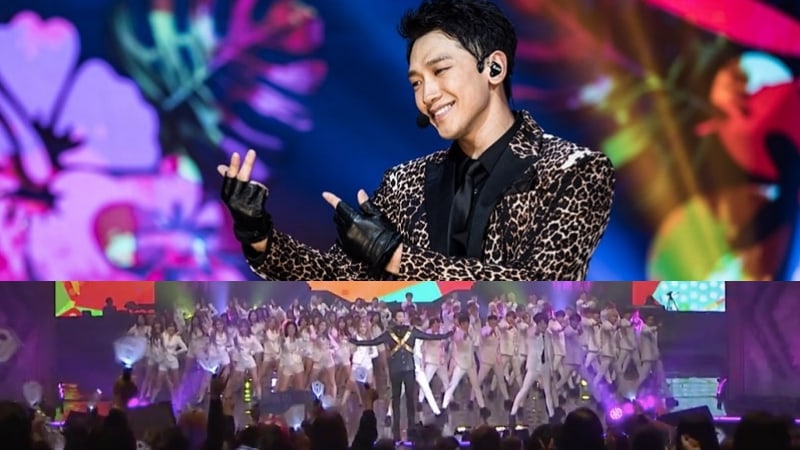 Watch: Rain Makes A Roaring Comeback With Performances Of Hit Tracks, Collaboration With “The Unit” Idols, And More

Rain opened the show with an intro and a performance of his comeback title track “Gang.” He then followed up this powerful performance with fan-favorites “Hip Song,” “How to Avoid the Sun,” “I’m Coming,” and “It’s Raining.”

Afterwards, a segment entitled “GoBack” included a clip of an interview with Rain where he talked about his difficult beginning as a singer. He opened up about his first debut as a boyband member in 1999 that turned out to be a failure, then having to work as a backup dancer for four years before finally debuting as a solo male artist in 2002.

“I was so nervous, so scared, and so desperate,” said Rain thinking back to his debut days. However, despite his determination and talented staff, Rain did not see immediate success on the music charts.

However, he said he asked for another chance and before wrapping up promotions for his first album, he followed up with the promotion of the track “Instead of Saying Goodbye,” which became a hit. This opportunity led to more opportunities, which led to the moment he won Artist of the Year at the 2004 KBS Music Awards.

After the interview, Rain performed “Bad Guy” on stage for his fans.

His friend and actor Lee Shi Un then came on stage to MC a Q&A session where Rain answered fan-submitted questions. During the Q&A, Rain responded to fans’ requests and inquiries, and even hinted at appearing in a drama next year. He then performed some more classics such as “Rainism” and “Love Story,” as well as introducing new tracks such as “Again” and “Sunshine.”

Rain currently acts as the lead mentor on the KBS idol rebooting show “The Unit,” and he shared his stage with the contestants for their performance of the show’s title track “My Turn.” They also joined him to perform his classic song “Instead of Saying Goodbye.”

The singer and actor also took time to speak directly to his fans between performances. A visibly touched Rain stated, “I think I acted strong. I thought that was the way to survive. I always thought I needed to show you guys something and honestly, that pressure and weight were really difficult.”

He continued, “However, I earned the most valuable thing—family. I feel like I am starting the second chapter of my life. I sincerely want to thank you again for allowing me to be on stage for 15 years of my life.”

The show also aired clips of exclusive interviews with close friends of Rain and famous celebrities such as JYP’s Park Jin Young, actors Song Seung Hun, Kim Jae Wook, and Lee Bum Soo. Rain concluded his comeback show with a performance of “I” and officially marked his comeback to the music industry.

You can watch more of Rain in the latest episode of “The Unit” below!