Naul’s new track “Emptiness in Memory” has taken the No. 1 spot on all major charts!

The Brown Eyed Soul member released the new track on November 29, marking his first comeback in over two years. On the same day of the release, Naul’s new song topped realtime charts of sites including Melon, Genie, Soribada, Olleh, Mnet, Naver, and Bugs.

Now as of December 4 at 12:30 a.m. KST, “Emptiness in Memory” has achieved a perfect all-kill. A perfect all-kill is when a song is at No. 1 on all daily and realtime charts of all six major Korean music sites, as well as No. 1 on iChart’s realtime and weekly charts. 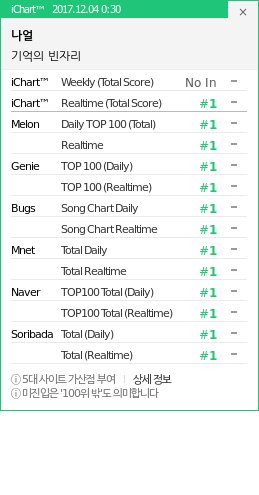 Naul
How does this article make you feel?