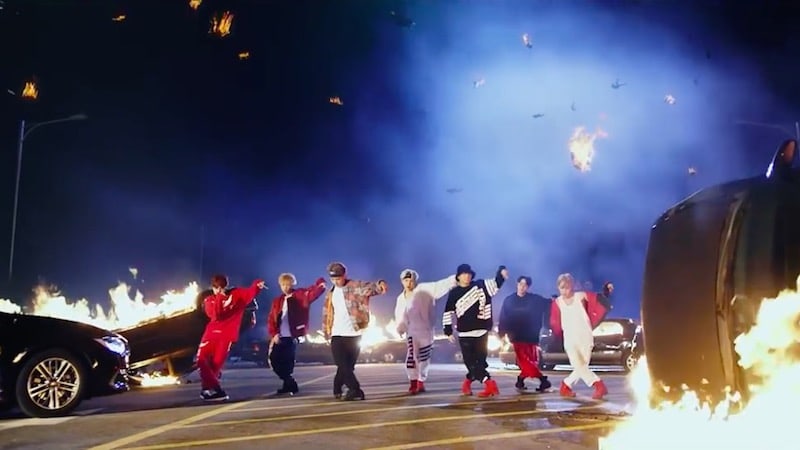 BTS’s “MIC Drop” has smashed another record for K-pop groups on Billboard!

BTS recently collaborated with DJ Steve Aoki and rapper Desiigner on a remix of their track “MIC Drop” from their September mini album “Love Yourself: Her.” The track became the first song by a K-pop group to reach No. 1 on the iTunes Top Songs chart in the United States, and has also ranked high on charts in the United Kingdom, Germany, and many other countries.

On December 4 local time, Billboard announced that BTS’s “MIC Drop” has grabbed the No. 28 spot on the Hot 100 chart for the week ending in December 16. The chart measures the most popular songs in the United States each week, with rankings determined by radio play, sales data, and streaming activity data.

According to Nielsen Music, “MIC Drop” has reached No. 28 on the Hot 100 chart with 9.8 million streams in the United States in the first week and 45,000 downloads sold. Billboard has also noted that “MIC Drop” has received more radio play than BTS’s previous Hot 100 single “DNA.”

BTS previously achieved their dream of making it on to the Hot 100 chart when “DNA” debuted on the chart at No. 85. The track went on to spend an incredible four weeks on the Hot 100, and set a record for K-pop groups in the second week when it reached No. 67.

After making it on to the Hot 100, BTS named entering the top 50 of the chart as their next goal, which they have now already accomplished! On top of that, they’ve grabbed a coveted spot in the “Top 40” of the chart.

Billboard’s website will be updated with the new full charts on December 5.