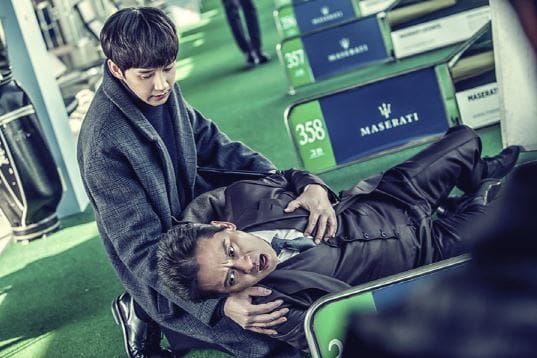 In the drama, Kim Byung Ok plays a greedy businessman named Park Chul Min, who has strong desire for money and is anxious he will lose all his possessions. He becomes even more obsessive after he finds out he has an unknown disease. Park Sung Hoon plays Park Chul Min’s sensitive son Park Gon, whose emotions are suppressed. He is the fiancée of Kim Young Mi (Shin So Yul) and is secretly in love with Jung Hae Ra (Shin Se Kyung).

In the stills, Park Sung Hoon appears refined and handsome, but the way he’s stiff and intimidated by Kim Byung Ok’s presence directly reveals what kind of psychological suffering he is going through.

Kim Byung Ok, on the other hand, is leaning his weight against his cane while clutching onto his chest. There is a vibe of urgency in the air. Furthermore, there is not much of affection or sense of closeness between the father and son. Instead, there is a chilly atmosphere between them, heightening the story behind these two.

“Black Night” is about the story of a man who risk a dangerous fate for the woman he loves. The first episode will air on December 6 at 10 p.m. KST.