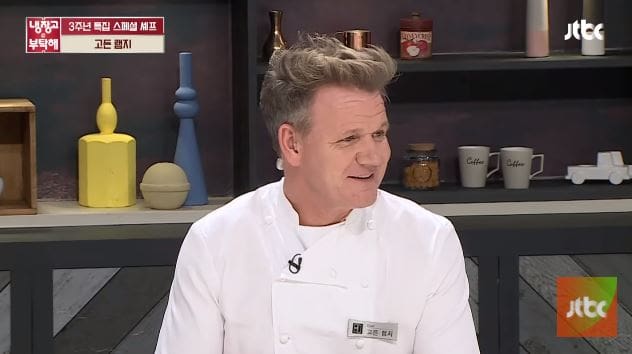 Gordon Ramsay has made his first appearance on a Korean variety show!

On the December 4 episode of “Please Take Care of My Refrigerator,” the famous celebrity chef made his special appearance towards the end of the episode. He first stated, “I’m so excited to be surrounded by such talented chefs.”

Chef Raymond Kim exclaimed, “I feel like as he sat down, the stars [worn by chefs to mark their wins] started falling off.” He then told Gordon Ramsay, “I’m such a huge fan,” to which he replied, “That’s very kind [of you]. What are these, Michelin stars?” Raymond Kim explained that the number of stars represented how many times they’ve won.

Gordon Ramsay then asked, “Who’s the most popular?” and Raymond Kim pointed out chef Lee Yeon Bok and Sam Kim. He also pointed out webtoon writer Kim Poong, and said, “He’s not a chef, but he’s very popular in Korea.” Noting his unique hairstyle, Gordon Ramsay guessed, “Is he a hairdresser?” making the rest of the celebrity chefs and guests laugh.

On the 15-minute cook-off between the chefs, he commented, “I’m very excited. You know, a great chef can do a lot in 15 minutes. I can do it in five if you wish.”

Gordon Ramsay will be participating as a celebrity chef, cooking for the guests in next week’s episode.

Please Take Care of My Refrigerator
Gordon Ramsay
How does this article make you feel?