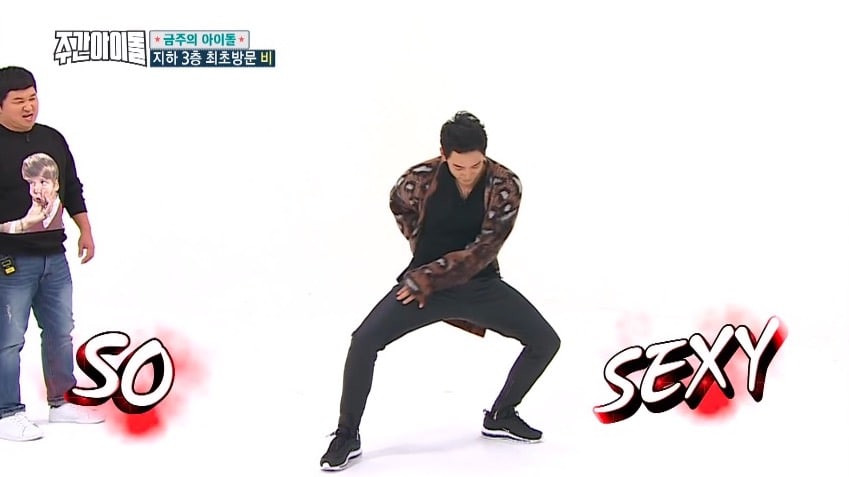 On the December 6 episode of MBC every1’s “Weekly Idol,” Rain appeared as a guest after recently making a comeback with his mini album “My Life.”

The hosts, however, did not make it easy for Rain to talk about his album. They hilariously suggested that he perform in front of the production staff to receive “boots” and win the chance to advertise his album. Rain burst out laughing at this offer which would completely reverse his role as a judge on idol rebooting program “The Unit.”

In the end, Rain agreed to dance to random tracks by popular idols for the challenge. The first music that played was “Open Up,” a song from “Produce 101 Season 2” famous for Kang Daniel’s signature thigh dance move. Rain nailed the thigh dance but soon lost the beat, making everyone laugh.

Another try at the song ended up with the same results and Rain finally declared between laughs that he would simply give up the challenge. However, Rain then danced to Taemin‘s “MOVE” and Sunmi’s “Gashina,” earning a “superboot” from Jung Hyung Don.

Rain also participated in the random play dance. After the hosts bombarded him with over-the-top praise, Rain appeared to be shy under the heavy pressure. As the tracks “Rainism,” “Love Song,” “Bad Guy,” and “Instead of Saying Goodbye” played, the singer quickly got the grasp of the game and started to relax, dancing naturally.

The dance reached its climax when the title track for Rain’s new album “Gang” began playing. After taking off his watch, Rain really showed off his powerful dance moves. The hosts then announced that Rain won the game, granting him a pack of top quality beef as the prize.

Rain
Weekly Idol
How does this article make you feel?