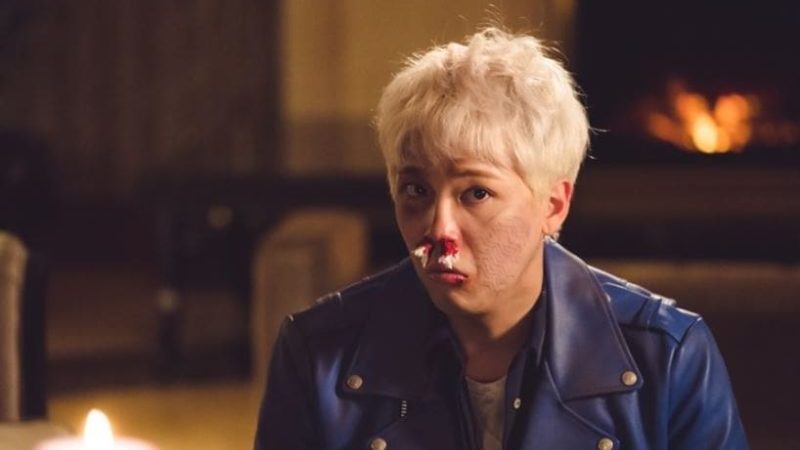 In “Hwayugi,” Lee Hong Ki plays P.K, a pig monster who seduces women and is living as a top global star. With his popularity and sociability, he gains information and goes back and forth between Son Oh Gong (Lee Seung Gi) and Woo Ma Wang (Cha Seung Won).

In the released stills, Lee Hong Ki is sitting in a luxurious room that has an antique brown sofa and extravagant fireplace. He’s bleeding from both nostrils, and a shoe mark is imprinted on his left cheek. His expression looks sorrowful and surprised, and it seems as if he is being admonished by whoever beat him up. It’s a far cry from his stylish entrance to the scene, with his bleached hair and blue rider’s jacket befitting a star.

Despite the mortifying situation, Lee Hong Ki did his best to act out the scenes with various dramatic expressions and theatrical acting as the sly P.K. He also touched the production crew with his thorough preparation, always with his script in hand and always monitoring his own acting. He also maintained his bright personality throughout the long filming time and brightened the mood by comforting and encouraging the production crew.

The production crew stated, “We actually worried if it was okay for Lee Hong Ki to ruin his appearance like this, but on the contrary, he was assertive about it and did the scene without any hesitance.”

The first episode of “Hwayugi” will premiere on December 23 at 9 p.m. KST.