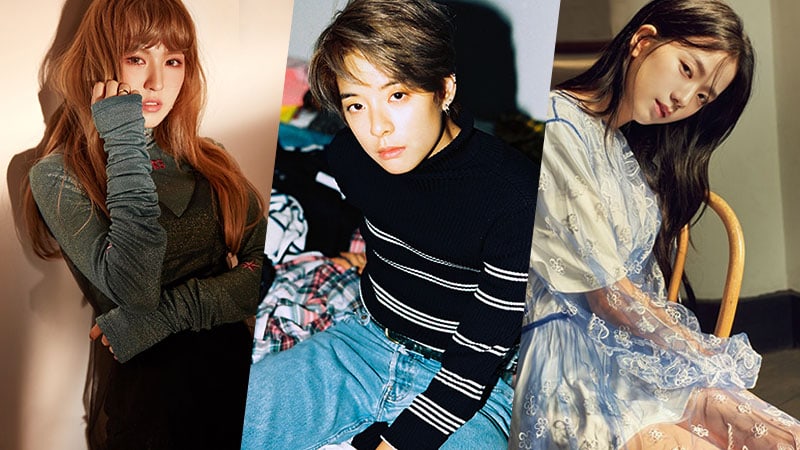 10 Female Idols You Would Want As Your Sister IRL

Sisters! Some of us have them, some of us don’t. Putting aside your own siblings, wouldn’t it be fun to imagine which of your favorite idols would make good brothers and sisters? Thus, this list was born! For those of you who daydream about having an idol for a sister, I present 10 potential candidates that could make your dream come true. Enjoy!

One of my favorite things about Amber is that she always seems so done with her friends. In my opinion, she would be a chill sister who wouldn’t be afraid to call you out for the stupid things you do. But it’s okay, since she does it out of love.

Ailee would be a protective and loving sister who would always make you laugh with her ridiculous antics. Because of her outgoing personality, you can learn how to become a social butterfly as well. Even when she’s accepting an award (as seen below), she’s still her fun and dorky self.

HyunA would be the cool and mature sister who could teach you about the ways of the world, seeing as she serves as a mentor for the younger Cube artists. And if you ever called her when you were in trouble, she’d have your back.

Wendy would be a great sister in that you could always trust her, and she would be very reliable. No matter what, she would listen to your problems the best that she could. Side note: just imagine how fun it would be to bake with Wendy. Am I right, or am I right?

With her unpredictable 4D personality, there would never be a dull moment with Jisoo as your sister. She would never hesitate to do something if she knew it would make you laugh. And above all, she would take good care of you, just as she takes care of the younger BLACKPINK members.

Look at the way Kim Jisoo treats her.
The smile on Jisoo’s face tells us how much she loves BLINKs. I LOVE HER SO MUCH ? in fact i smile at everything she does ?#blackpink #jisoo pic.twitter.com/axsCMWbT4p

Having Bomi as a sister would be interesting, to say the least. Her outbursts can happen at any time and anywhere, unfortunately for you. However, having Bomi around means having lots of great adventures. Though she may be clumsy at times, she always means well!

Admittedly, being sisters with all of TWICE sounds awesome, but Nayeon in particular came to my mind first. As the oldest member, she keeps an excellent balance of playfulness and responsibility within the group. Plus, she’s just straight up adorable!

If you’ve ever seen these sisters in action, you know perfectly well how charming their dynamic is. I would consider being sisters with these two to be the ultimate blessing; but at the same time, I would never want to get in the way of their already great relationship!

Having CL as a sister would be the best of both worlds. On one hand, it would be cool to have a chic and fashion-forward sister like her. But if she’s your sister, you’ll get to see her silly side, just as Super Junior’s Kim Heechul describes in the clip below.

Now that would be a wild time. You might lose your mind a bit, but you’ll laugh so hard that it won’t even matter.

Which idol would you want as your sister? Be sure to tell us in the comments!