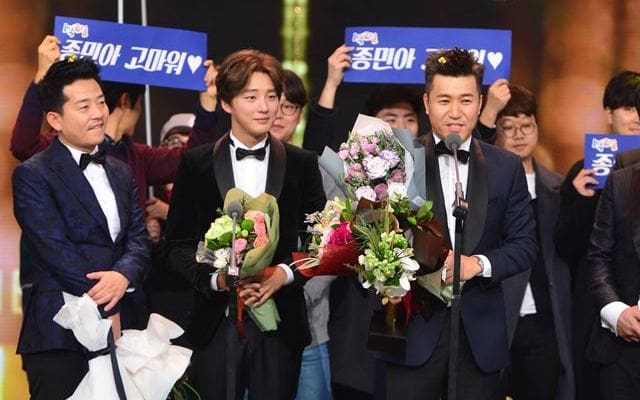 Despite one source from KBS announcing that the Entertainment Awards were canceled, new conflicting statements suggest otherwise.

Another source from KBS stated to several other news outlets, “We are continuing to discuss the feasibility of holding the ceremony. Nothing has been decided [regarding its cancellation].”

In yet another differing, but not definite, statement, one KBS source said, “Realistically, it would be difficult to hold [the ceremony]. After this weekend, there will only be about two weeks left until entertainment award ceremonies will have to take place, but it will be hard to prepare the event in that amount of time. As of now, the trophies haven’t even been made.”

Only two of KBS’s three annual year-end ceremonies will happen this year.

On December 8, a source from KBS confirmed, “We will not be holding the 2017 KBS Entertainment Awards.” This will be the first time since the ceremony’s conception in 2002 that it will not take place.

The cancellation of the Entertainment Awards is due to the ongoing strike that is calling for the resignation of current KBS president Ko Dae Young. On November 21, 11 director-level staff members joined the union, and at least 80 percent of staff members from KBS variety shows are part of the union as well, making it near impossible to even consider holding the Entertainment Awards as most variety programs have been on hiatus since September.

KBS has confirmed that both the Drama Awards and Song Festival will still take place, but on a smaller scale compared to those from years past. Nonunion producing directors and higher executives will be carrying out these two ceremonies, and preparations are currently underway.

The 2017 KBS Drama Awards and 2017 KBS Song Festival will take place on December 29 and December 31 respectively.

KBS Entertainment Awards
KBS
How does this article make you feel?