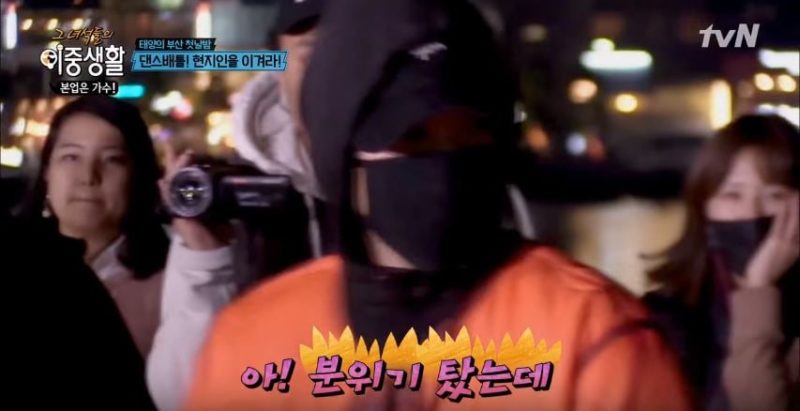 Watch: BIGBANG’s Taeyang Participates In A Street Dance Battle While Hiding His Identity

BIGBANG’s Taeyang made jaws drop with his epic moves during a street dance battle with other civilians who had no idea who he was due to his cover-up.

On the December 8 episode of “Livin’ The Double Life,” Taeyang, YG producer Kush, and YG staff member Jae Wook went on a trip to Busan together. They dropped by Bupyeong Market (also known as Tin Can Market), where many people recognized Taeyang, even the elders. Surprised at first, Taeyang commented, “I guess I am famous.”

Later on, the three of them came upon a street dance battle in Busan. Because he was covered in a mask and hat, no one recognized Taeyang. Jae Wook and Kush persuaded Taeyang to join the dance battle. Taeyang started to move to the beat as he searched for the right time to enter. At last, the right moment came, and he impressed the dancers on the scene with his smooth moves. Everyone started to wonder who this magnificent dancer was. However, Taeyang never revealed his identity.

Taeyang commented, “To be honest, I had a lot of thoughts in my mind after that. During the dance battle, I was able to relive the feelings I had before I debuted when I enjoyed music and danced without caring about who I am. I wanted to go back to those times. I didn’t think that I absolutely have to go back, but just that it’d be nice to.”

BIGBANG
Taeyang
Livin' the Double Life
How does this article make you feel?