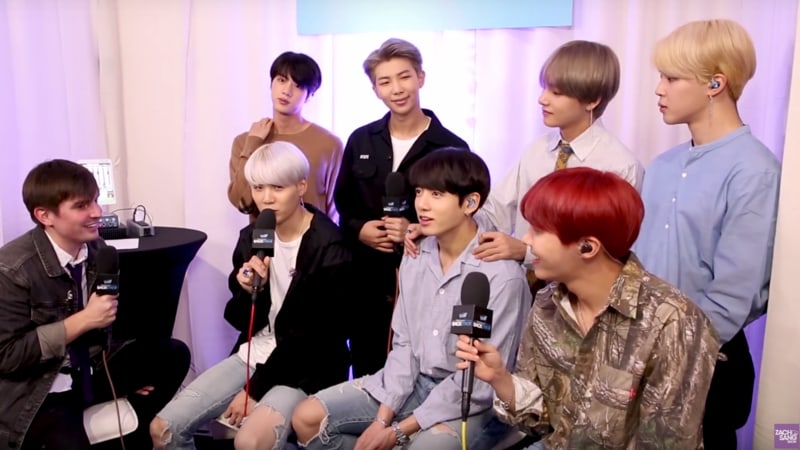 11 Things That Happen In A BTS U.S. Interview

BTS has been traveling the United States a lot lately, be it for their WINGS tour, the BBMAs, or the AMAs, and each time, they also did a lot of interviews. Like, A LOT of interviews. And aside from interviewers not being able to keep the members apart, people asking for an English album, and “Despacito,” there were things that seemed to happen over and over again. What follows is basically a BTS U.S. interview in a nutshell. Let’s go!

We’re not trying to drag anyone here, as recurring questions are to a certain degree a common thing in interviews, but the boys’ reactions to questions like “Who is your Hollywood celebrity crush?” and “What American artist do you wanna collaborate with?” have gotten too funny to not talk about. And honestly, no one can blame them. There’s been Namjoon hesitating a millisecond where he ponders if he really wants to translate the question yet again, Suga looking mad for some reason, and JK seeing RM’s expression and not being able to hide the fun he’s having. Over the last few months, some questions just went from being interesting to prompting a hilarious spectacle of awkwardness.

2. Interviewers trying to talk about girls and hilariously failing

When the interviewer tries to steer the conversation towards dating topics, the boys tense up for a second and then successfully avoid the whole issue, be it Suga explaining that there’s no time anyway, Jin saying he has no thoughts on it, or Tae finally putting his foot down once and for all, declaring that no, they did “not” ever get involved with an A.R.M.Y. Seeing them deflect those questions, it almost seems as if they were… bulletproof. (Sorry.)

3. Interviewers or crew being very relatable

In most cases, fans’ opinions on the interviewers range from “I probably could’ve done that better” to “Oh my god, same!” Sisanie, co-host of “On Air with Ryan Seacrest,” clearly is an example for the latter, reacting to Jin throwing kisses with a very accurate verbalization of our thoughts, giggling “Oh cute!” Also very relatable: the cast of The Morning Mess just going crazy with the boys in their short interview. And of course the usual, people not being able to hide their reactions like interviewers staring at the members for too long or the crew giggling behind the camera.

4. BTS declaring their love for A.R.M.Y

There are things in interviews that get old after some time, but one thing that surely never will is BTS showing their true colors and taking every chance they get to tell their fans how much they mean to them. When asked if they ever got hurt by fans, RM hilariously made very clear that he only gets hurt because he hurts himself. The boys kept on repeating that they never expected to see so many fans and that fanchants are the greatest thing A.R.M.Y does for them. And if that didn’t melt your heart yet: in a V Live after the AMA performance, Suga came forward and said the fanchants basically healed his nervousness before going on stage. As much as fans adore BTS, it seems the boys always make sure to give something back.

The most obvious and important thing about Nams in these interviews is the fact that he’s translating to the members, translating back for the interviewer, and in addition to that still giving the smartest, most eloquent answers. One of the best examples is the really deep interview with Zach Sang, who asked intriguing questions, making RM actually thank him several times. Besides being the best leader BTS could ever wish for and translating like a professional, RM does find time to include just the right amount of jokes and sometimes even juicy clap backs, such as: “Will we produce [a] whole album in English? That’s the question?” Oh the saltiness.

The one thing Jin got asked about the most is certainly his looks, specifically about the “Third Guy From The Left” and “Worldwide Handsome” hype. It wouldn’t be Jin if he didn’t pick up on that, so of course on he goes, throwing kisses, looking amazing, and just “Worldwide Handsome”-ing away. The only questionable thing might be the ominous $400 ring, but hey, after working so hard, he deserves any expensive ring he wants.

It might just be Yoongi’s resting face, but we just love his expression during most of the interviews, listening intently to Nams translating away, or is he? He seems to understand a lot before the translation. The moment RM explained how the members can’t speak English, Suga decided to answer his calling and compliment the interviewer in pretty decent English. Priceless. By now there’s actually a full-blown conspiracy that he’s secretly fluent in English.

8. J-Hope being a pretty bundle of sunshine

The obvious thing Hobi does in interviews with U.S. media, besides being a ball of very energetic sunshine, is teaching people how to dance. While he of course always does his best, this situation gets more or less ridiculous depending on the dancing skills of the interviewer. But the undoubtedly hilarious thing Hobi does in interviews in the U.S. is being an incredibly relatable sassy version of himself without even saying a word. His expression just says it all. Also, we hope he got rich from advertising Stars and Stripes fidget spinners.

9. The two faces of Christian Chimchim

In the latest interviews, Jimin was going back and forth between being a player and being the shyest fluff. Sometimes it only felt like seconds between him teaching the 3:33 part of “Fire,” flirting with the camera, or joking around, and suddenly being shy, smiling away, and hiding his face. We couldn’t decide for our lives which one we liked better. Good thing we don’t have to because both extremes and everything in between is what makes Chim so precious.

All of the members obviously improved their English skills, but Tae certainly takes it to the next level. RM’s teaching really seems to have paid off. Highlights of Tae’s English being “I’m proud of you” and his in-depth knowledge of the word “no” or it’s derivatives when they’re compared to The Beatles or confronted with dating questions. Another language Tae is obviously no stranger to is being a meme. Chin selfie? Sipping tea? Seems like when it comes to meme-ing, Tae can be the teacher for once.

11. You know nothing, Justin Seagull

Aka. Jungkook, aka. “I know her face but I don’t know her name.” Avoiding the question “Who is your favorite Hollywood celebrity crush?” might be a smart move, seeing as everyone knows our Kookie has only one single celebrity crush. He’s answered this question with the same name since debut: the one and only IU.

All jokes aside, the most important thing about those interviews is the reason why they do it, which is their love for the fans. They do it for A.R.M.Y, be it newcomers or fans that have been around since BTS’s debut. And even if the interviewers’ questions might be questionable at times, as long as it ends with everyone having a laugh (or a hilarious crack video being produced) it’s kind of a win-win situation.

Did you enjoy BTS’s interviews in the U.S.? What was your favorite situation? Tell us in the comments!

daisygonzo has several celebrity crushes and she actually knows their names. These seven guys are definitely some of them. She’s from the exotic, foreign lands of Europe, where no one ever goes to perform concerts. Looking at no one in particular. See her Instagram for more.