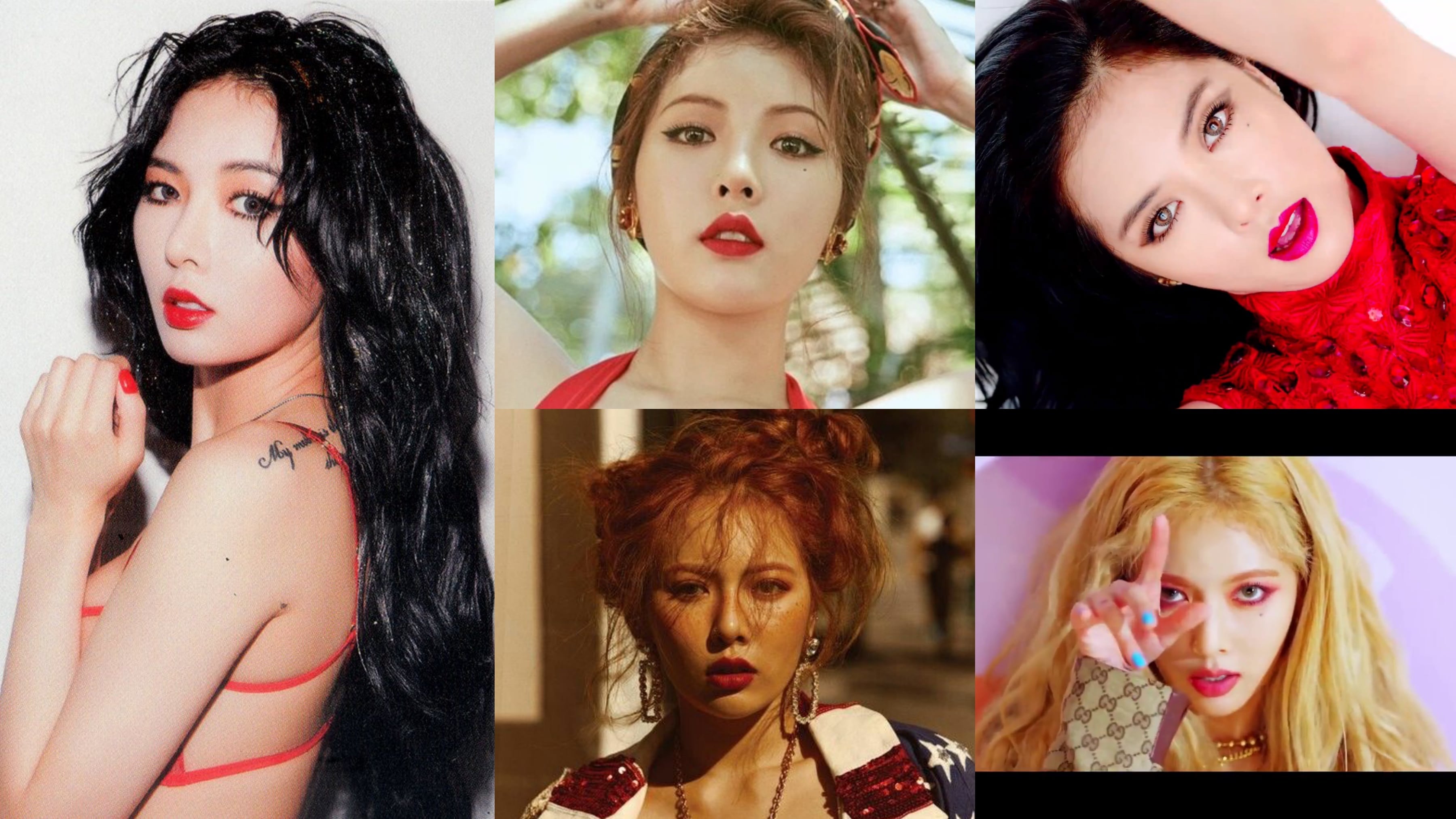 Bold And Beautiful: 11 Of HyunA’s Most Iconic Looks

There’s no doubt that HyunA is the queen of bold makeup transformations. She’s never afraid to try different and experimental looks — all while everyone else is doing the more typical and safe combo of dewy skin and ombré lips. From her classic cat eye, bright lip colors, tumbling locks, to her fierce and sexy vibe, HyunA always pushes the envelope through her performances and fashion; thus making her the ultimate style, hair, and makeup inspiration. Let’s take a look at some of her most memorable looks that are always trendy!

We love and miss all the girls of 4Minute, and even though they may have disbanded, we still can’t forget the statement-making concepts for their last two singles, “Crazy” and “Hate.” HyunA’s look definitely had that shock factor, which completed the image of what the group wanted to convey — that they are strong, independent women, and nobody can hold them down. 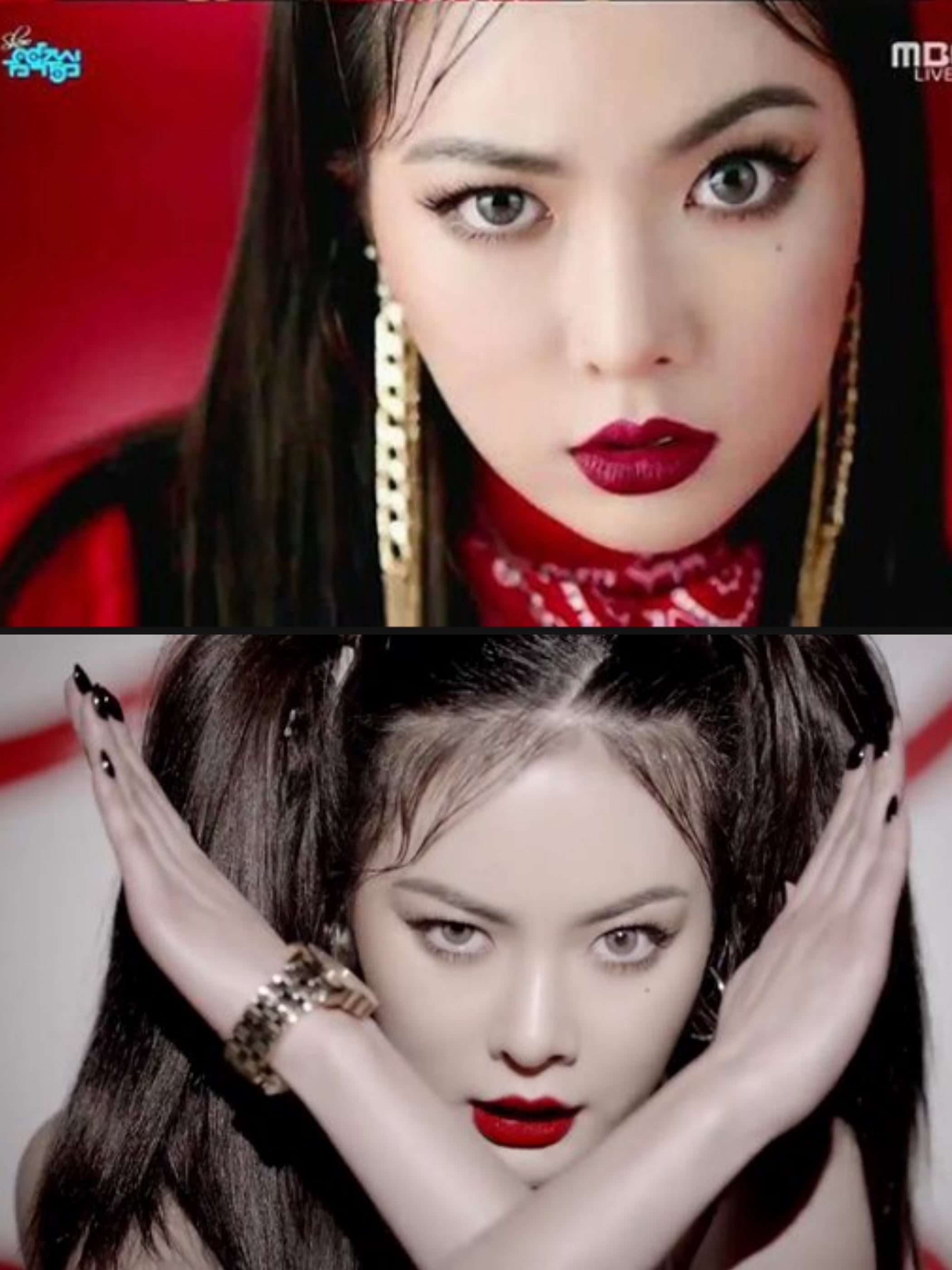 “Change” was the beginning of HyunA’s transformations that not only defined her fierce and sexy image, but also paved the way for her solo endeavors. In the video and in her performances, she wore her signature thick eyeline with a star drawn just above her cheekbone. 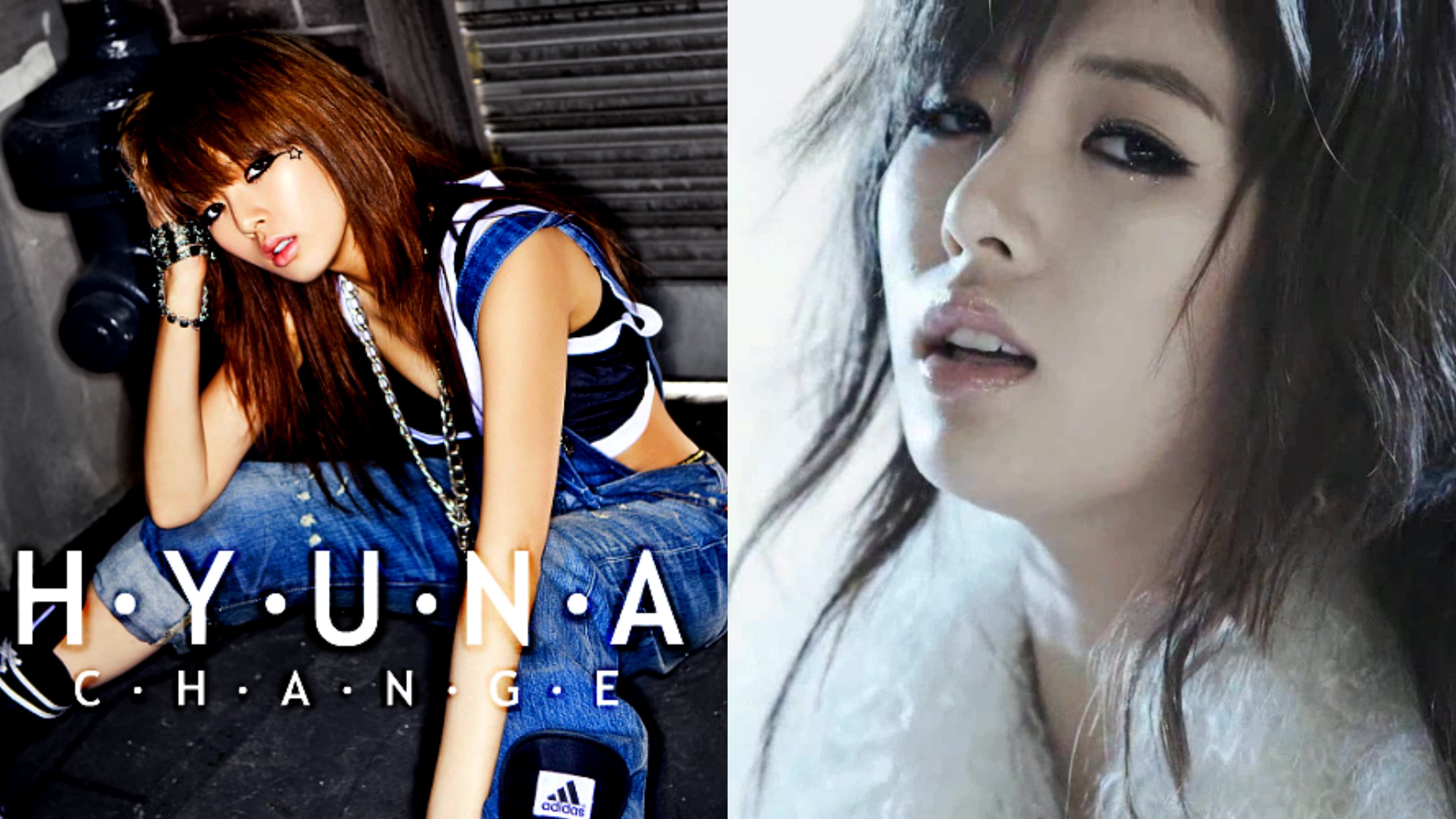 Who could forget the day when “Bubble Pop” first burst into the scene and became one of South Korea’s national summer anthems? It was then that it became clear: HyunA was on her way to becoming one of K-pop’s most famous sex symbols, and everyone was calling her the next Lee Hyori. Of course, there can only be one Hyori, and HyunA has her own style, but it can’t be denied that both are comparable when it comes to making the stage sizzle. For her summer look, she went for a beautiful tanned and sun-kissed complexion with bronzed, shimmering skin and nude lips. 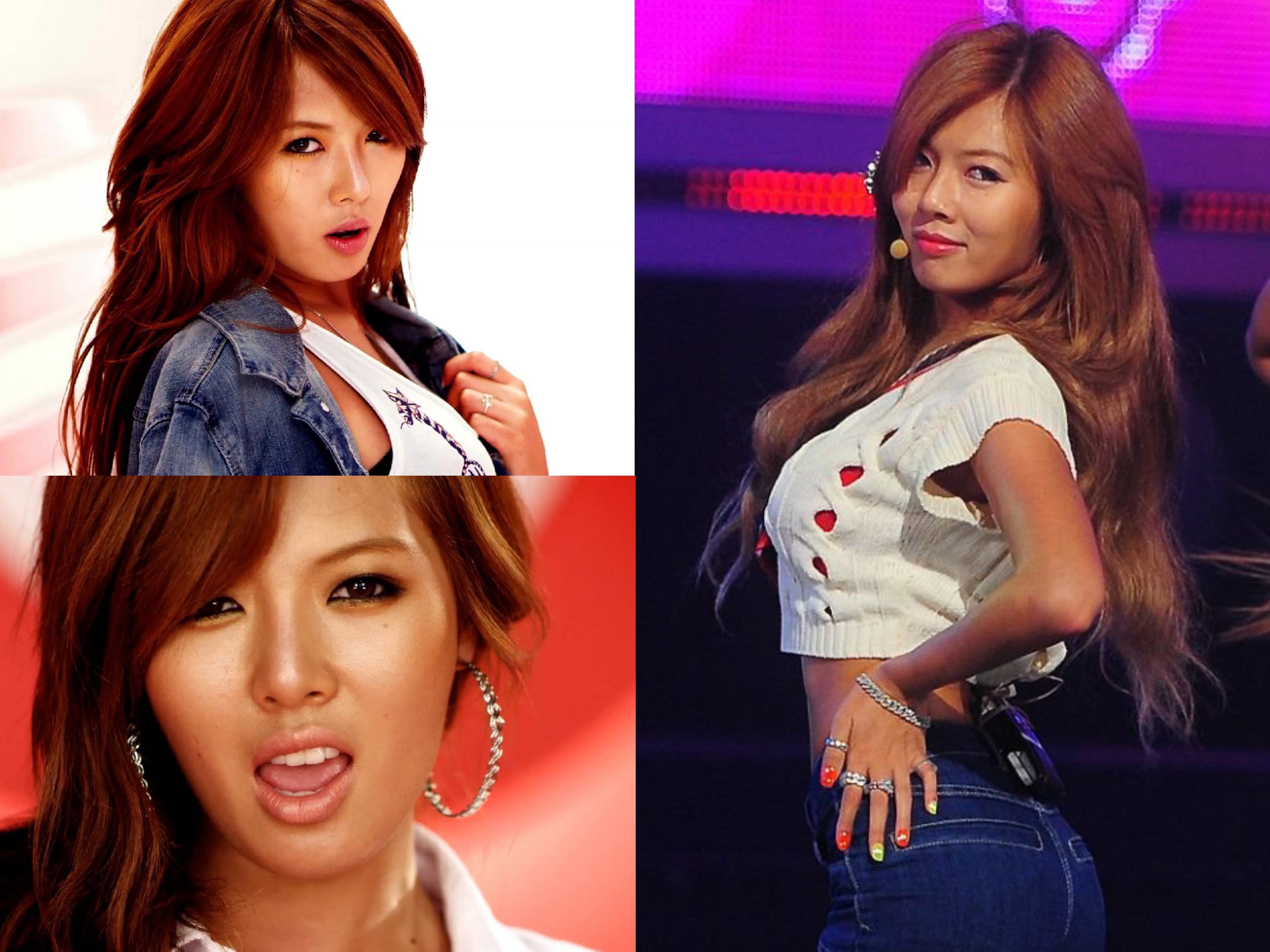 For “Ice Cream,” HyunA went for a mix of cute and flirty by adding a pop of teal shade on her eyelids (with a signature small drawing much like her “Change” days, only this time it’s a spade) and sporting bright pink lips. 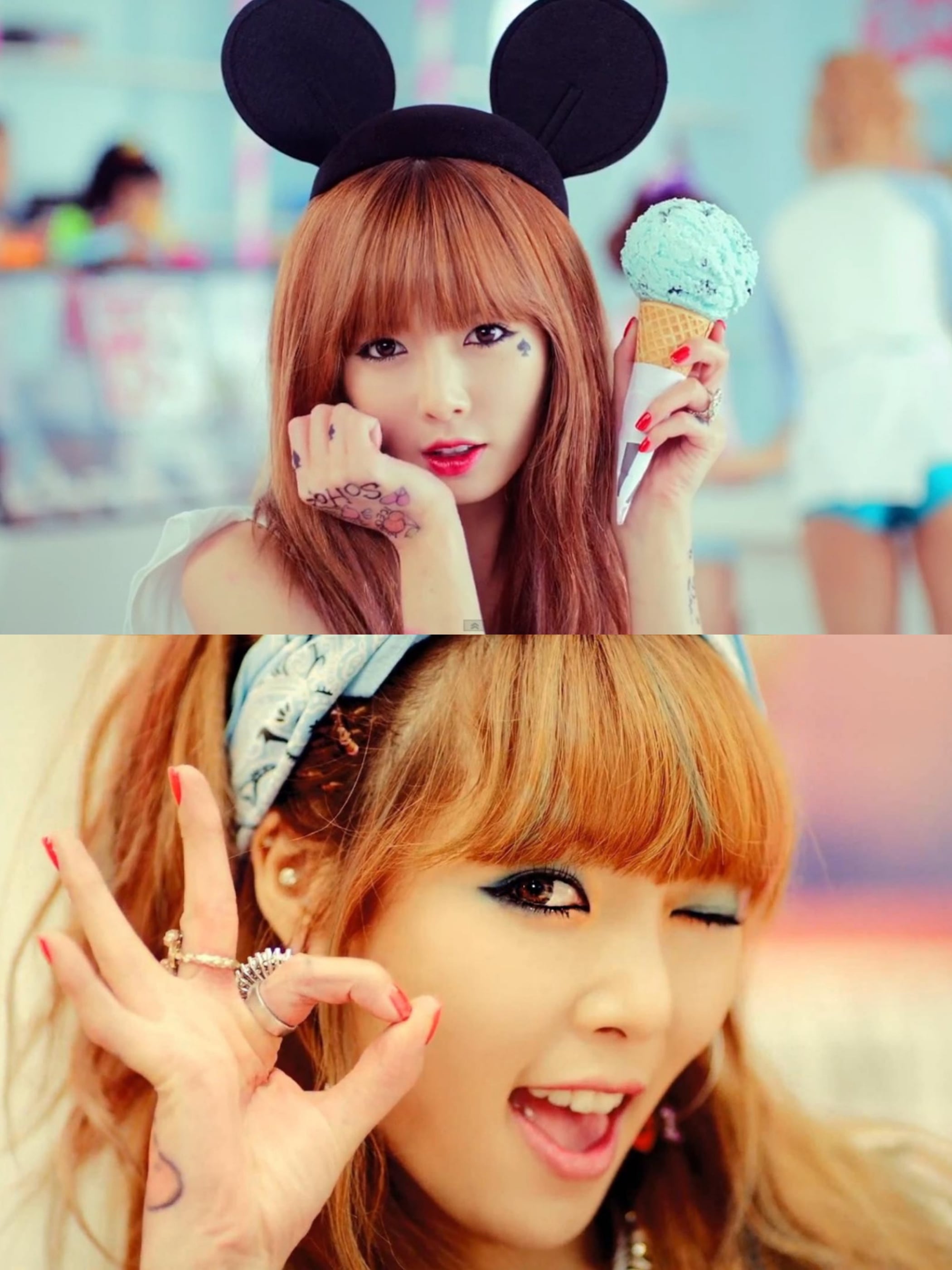 Trouble Maker is one of those tandems that changed the game in K-pop at that time. HyunA and Hyunseung had incredible and tangible chemistry onstage and everything was on point: from their catchy song, sleek and seductive fashion, to their alluring stance on stage. They teased the audience with their longing and intense gazes, and had dance steps that dared to go where no other girl-boy idol team had gone. For the single “Trouble Maker,” HyunA’s hair was long and wavy and she had a piercing cat eye paired with red lips, which completed her image as the object of Hyunseung’s fatal attraction. For the single “Now,” on the other hand, the couple went for a more wild and troubled look as they portrayed a desperate and dangerous love. 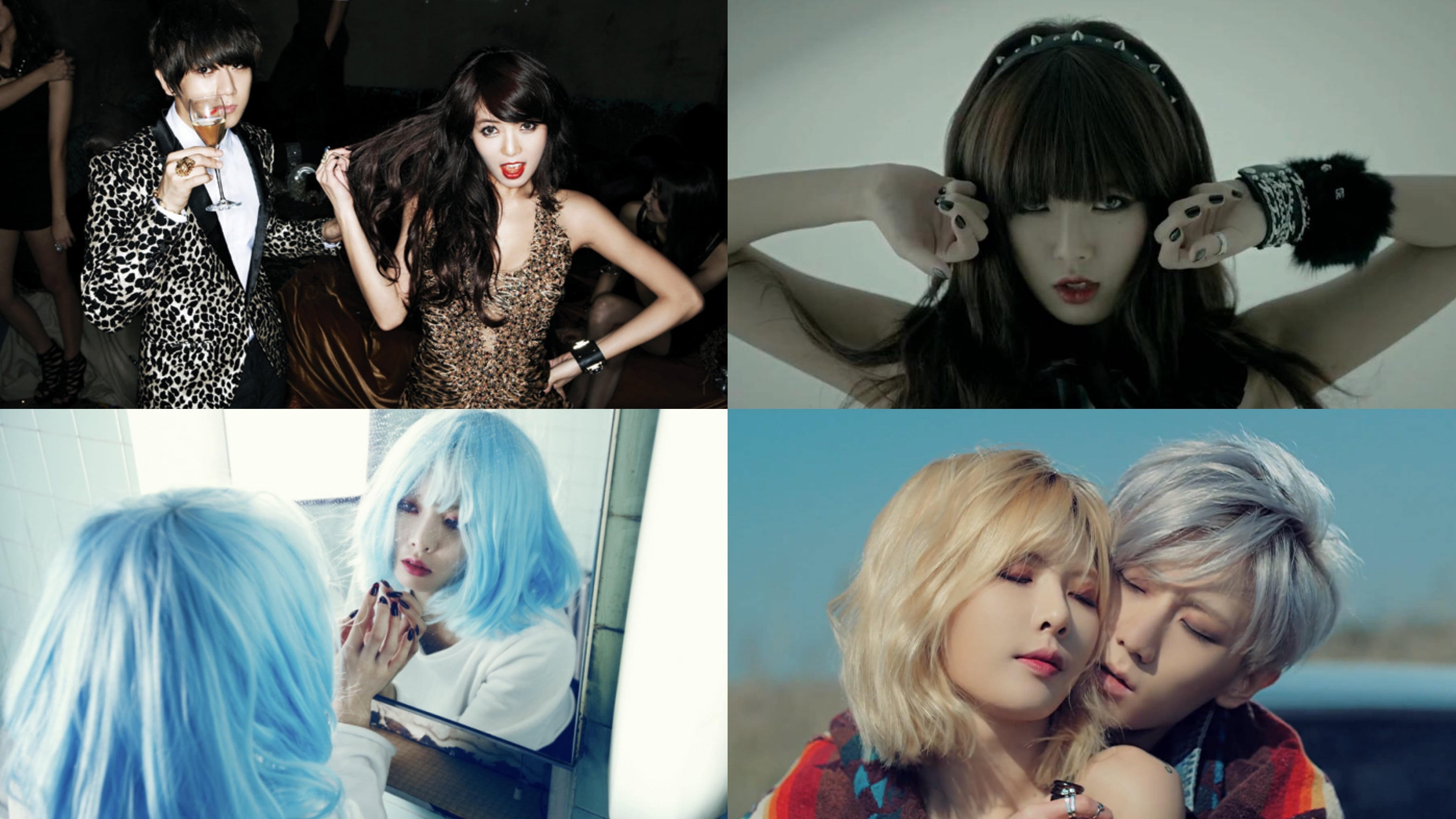 The “Red” era is by far one of HyunA’s releases which had the most number of looks. Of course she had on a bright red lipstick to go with the title of the song, but she also tried on hot pinks, two-toned colors, and plain nude. What’s interesting about this concept is her eye makeup, which was drawn lightly to follow the shape of her eyes. It went well with all her lip colors. 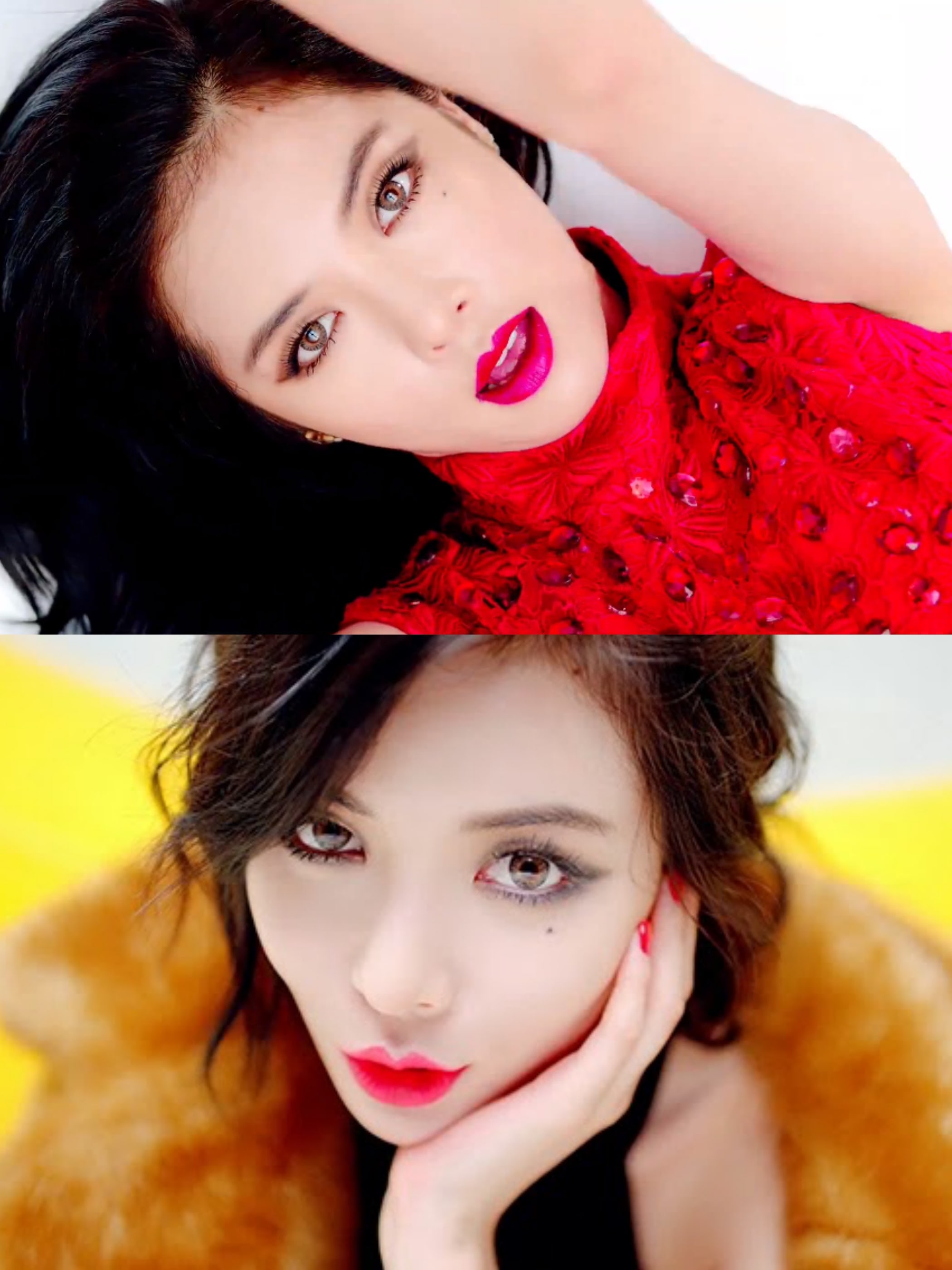 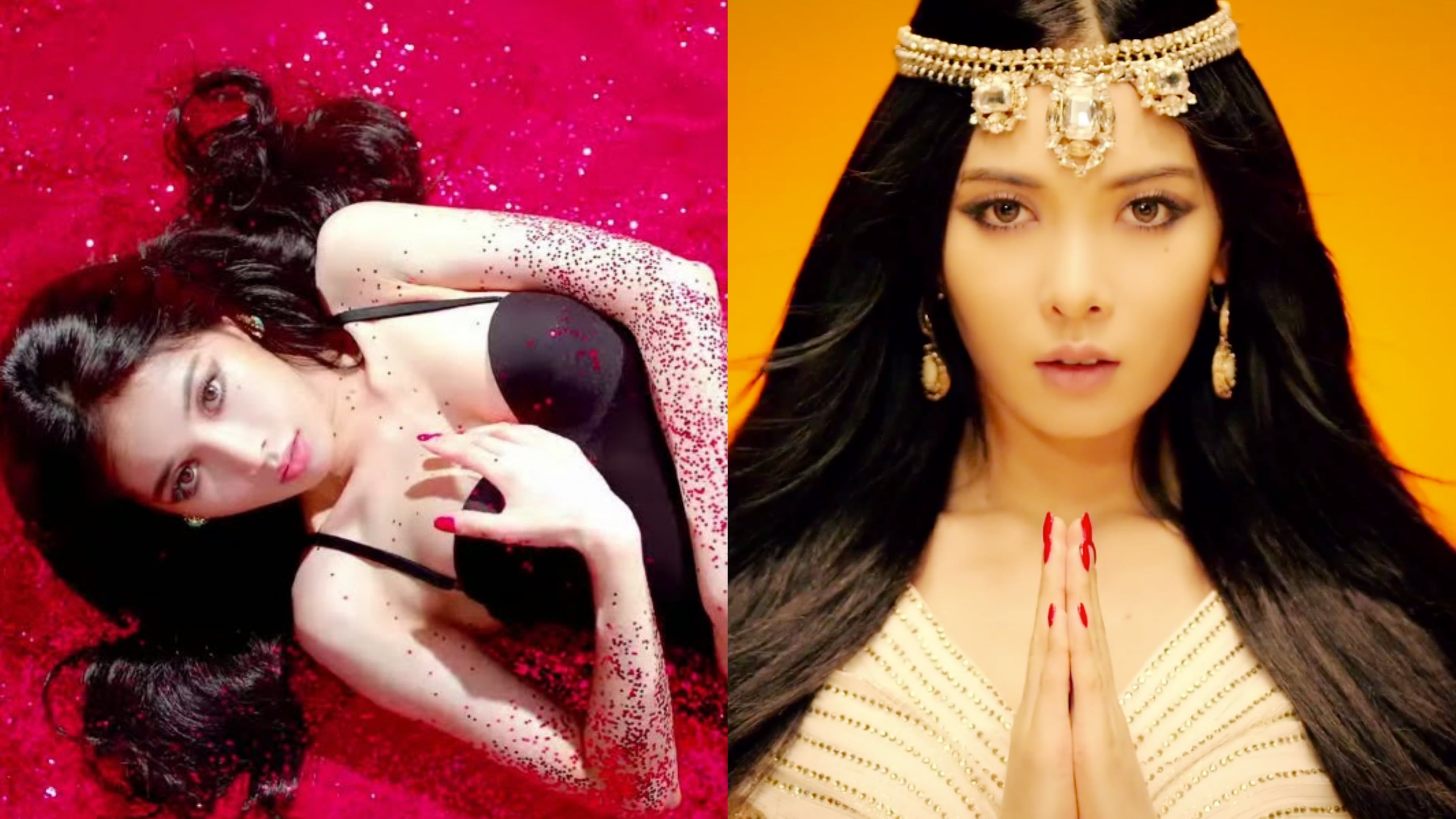 HyunA got in on the unicorn hair trend, too! Here it is in striking and faded versions. 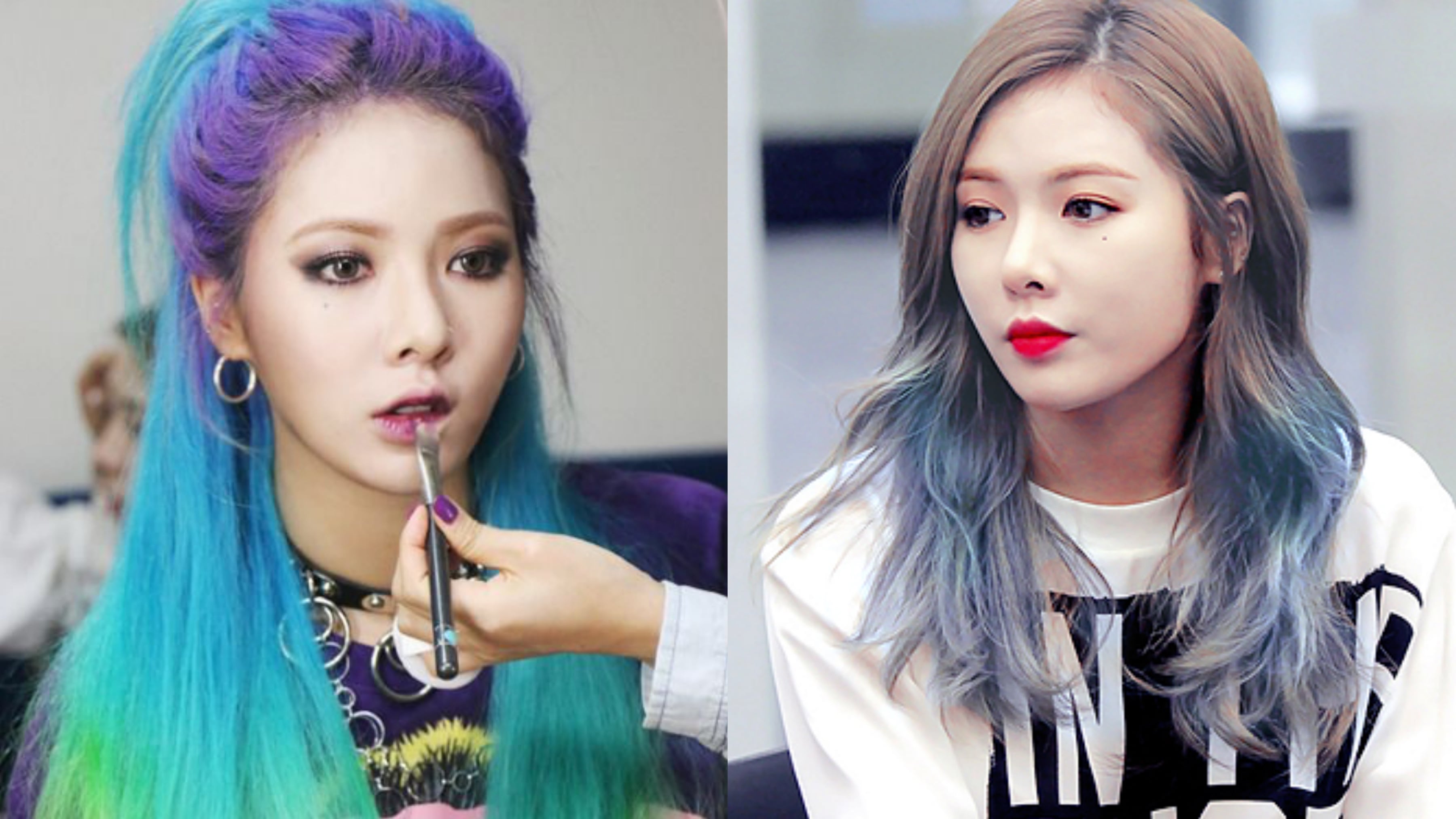 For her “How’s This?” promotions, HyunA’s concept was a pin-up girl, which was both sophisticated and playful at the same time.

HyunA’s redhead and faux freckles look in Triple H is probably the most interesting, fashion-forward, and editorial of all. Inspired by the retro ’70s revival in runways, where models sported faux freckles and clumpy eyelashes, HyunA looked like she came straight from the pages of a magazine. Additionally, what enhanced her look is a pair of light contact lenses that gave her a doll-like effect. 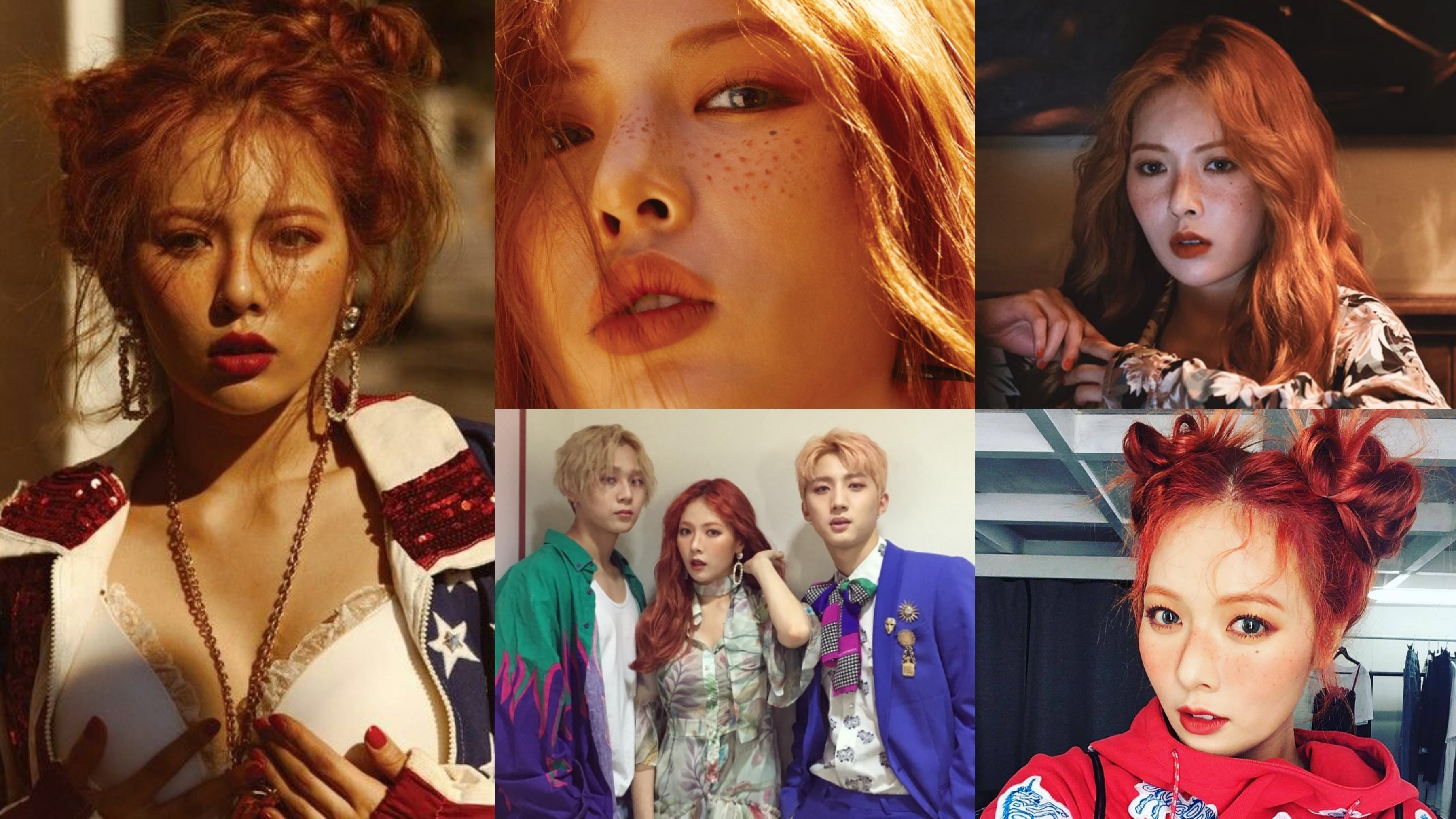 “Babe” showed two sides of the singer as she approached 26 years of age: one that is a pure, innocent image, while the other is stronger and more mature. During her performances, her makeup and nails were a combination of peach and chestnut colors paired with a tawny matte lip that looked absolutely gorgeous! 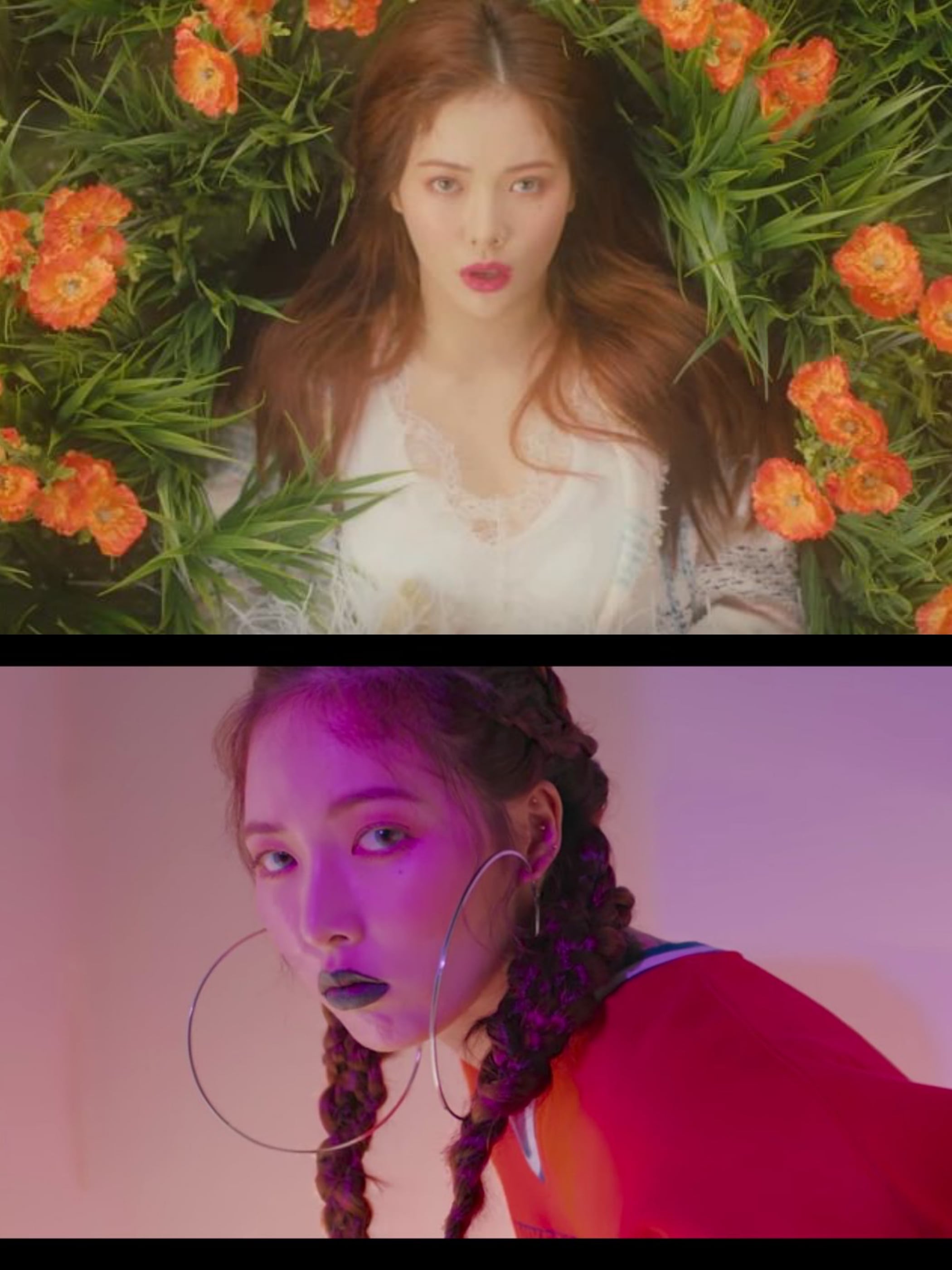 For her latest song, neon makeup colors gave her a fun and bright look. She changed it up instead of wearing her signature pin-up cat eye and red lip style. By having the vivid pink, red, and yellow shades along the waterline and the lash line, HyunA’s eyes looked much brighter and more defined. Who knew neons could look so sexy?

In her video, she also wore a more subdued light pink and mauve combination. Kudos to her makeup artist for thinking of these amazing looks, and of course, to HyunA who can practically pull off anything!

Hey Soompiers, which of these looks by HyunA is your favorite? Tell us in the comments below!