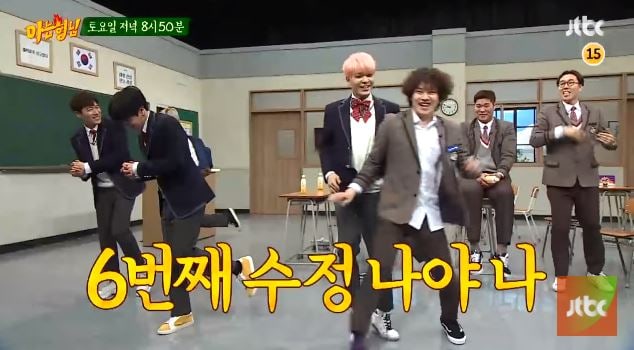 Watch: SECHSKIES Takes Over School In Chaotic “Ask Us Anything” Preview

“Ask Us Anything” promises a lot of laughter and chaos with their upcoming guests, SECHSKIES, in a preview.

Although the members are introduced calmly, things quickly change. First, the members of SECHSKIES show off their moves by dancing to their old hits. Heechul, a long-time fan of the group, joins in as their sixth member and dances right alongside with them. Eun Ji Won notices right away and yells, “What is he doing?” When Heechul won’t leave them alone, Eun Ji Won jokes, “I really don’t like this guy!”

The SECHSKIES members then show off their chemistry with the cast members as well as their talent for variety shows, befitting of a veteran idol group. Jang Su Won and Kim Young Chul battle it out in the former’s famous robotic acting. Known for his 4-D personality, Lee Jae Jin brings up random but hilarious topics such as Eun Ji Won’s love life and salted shrimp. Not wanting to lose to Lee Jae Jin, Min Kyung Hoon makes bold comments that shock the SECHSKIES member.

The show also parodies the “Saturday Saturday Is for Singers” segment during a skit, where the “Ask Us Anything” cast members play veteran group DJ DOC and Fin.K.L, while the SECHSKIES members play rookie versions of themselves. The two teams battle it out as SECHSKIES aims to win the chance to show off their performance on the show.

Knowing Bros
SECHSKIES
How does this article make you feel?