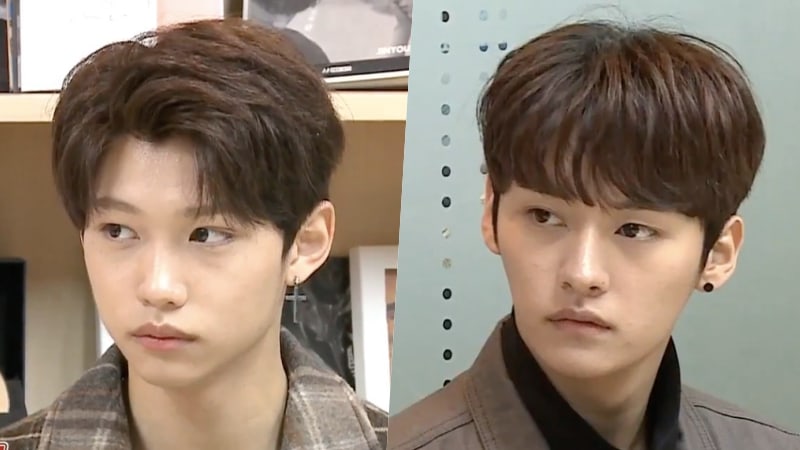 In the latest episode of “Stray Kids,” Park Jin Young gave eliminated members Felix and Lee Minho a second chance to debut with the group!

On the December 12 episode of the Mnet survival show, producer Park Jin Young revealed that the trainees’ final mission will be to perform live during next week’s episode. The mission will determine the final lineup for the group, and viewers’ live feedback will be taken into consideration when deciding which members will get the chance to debut.

In addition to their previously released songs “Hellevator” and “YAYAYA,” the seven remaining “Stray Kids” members chose a song composed by Seo Changbin to perform live. As they prepared for their upcoming showcase, the trainees were surprised by GOT7 members JB and Jinyoung, who stopped by to offer their support. GOT7’s BamBam also dropped by Bang Chan’s studio, taking the “Stray Kids” leader out for a meal to cheer him on.

However, the surprises didn’t end there. At the end of the episode, Park Jin Young announced the unexpected return of Felix and Lee Minho, to the delight of the surviving members. Felix had been eliminated in the previous episode, while Lee Minho was eliminated early on in the show. 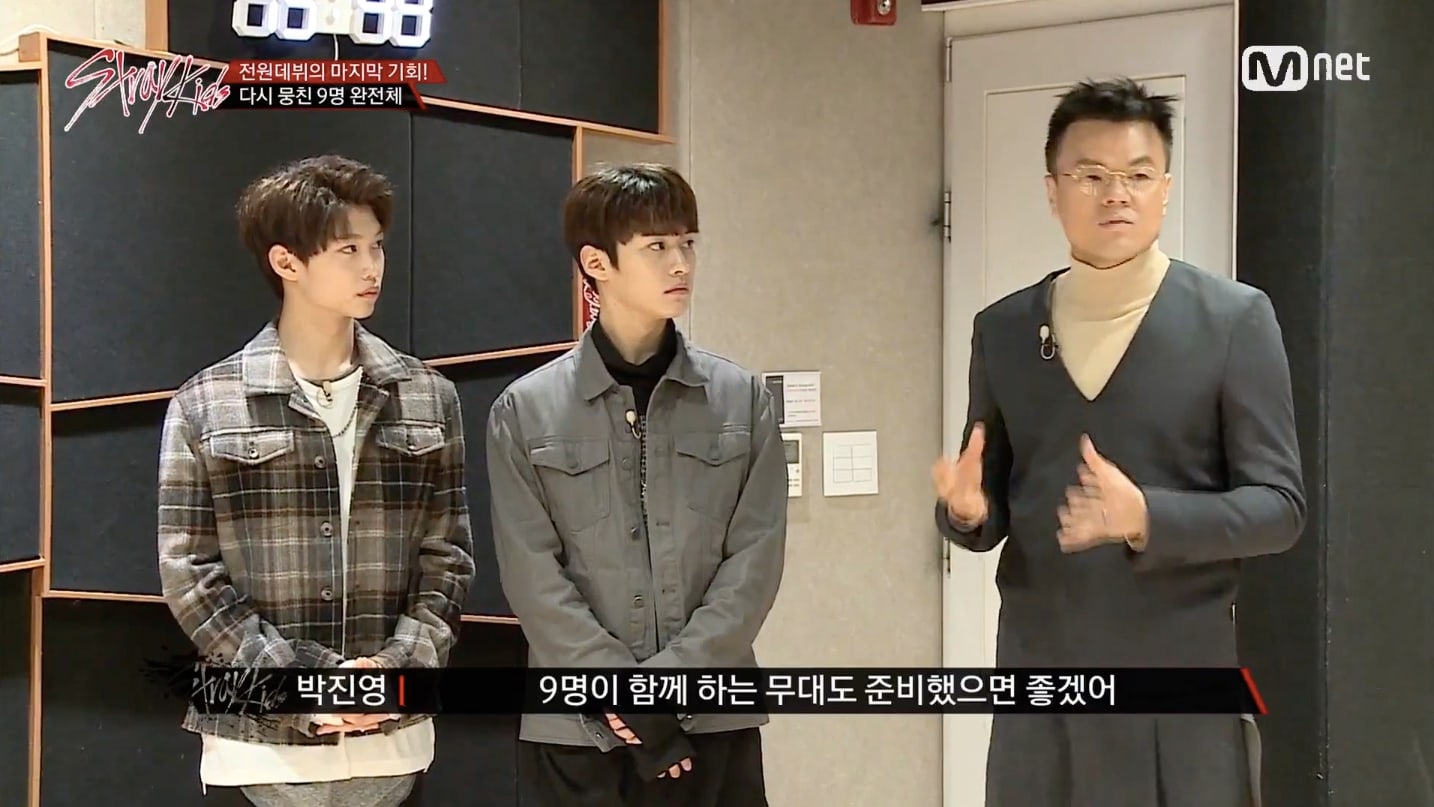 Park Jin Young announced that the two eliminated members would be participating in the final mission and that it would be their last chance to join the group. He first spoke to Felix and Lee Minho on their own, saying, “I heard that even after you were eliminated, you continued to work hard and practice diligently every day.”

He went on, “I gave it a lot of thought, and after the two of you left, the group feels different from when all nine members were together. Since you both have prepared [for debut] and practiced together with the group for a long time, I’d like it if I had just one more chance to see you perform again.”

“So before I make my final decision,” he concluded, “I think it’d be best for me to see all nine of you perform together and then decide.”

Park Jin Young also admitted to being a bit wary about his decision, saying, “This could be a second opportunity for the two of you, but it could also lead to a cruel second disappointment, so I want to be very cautious. But I think [both of you] would have fewer regrets if you gave it one more try.” 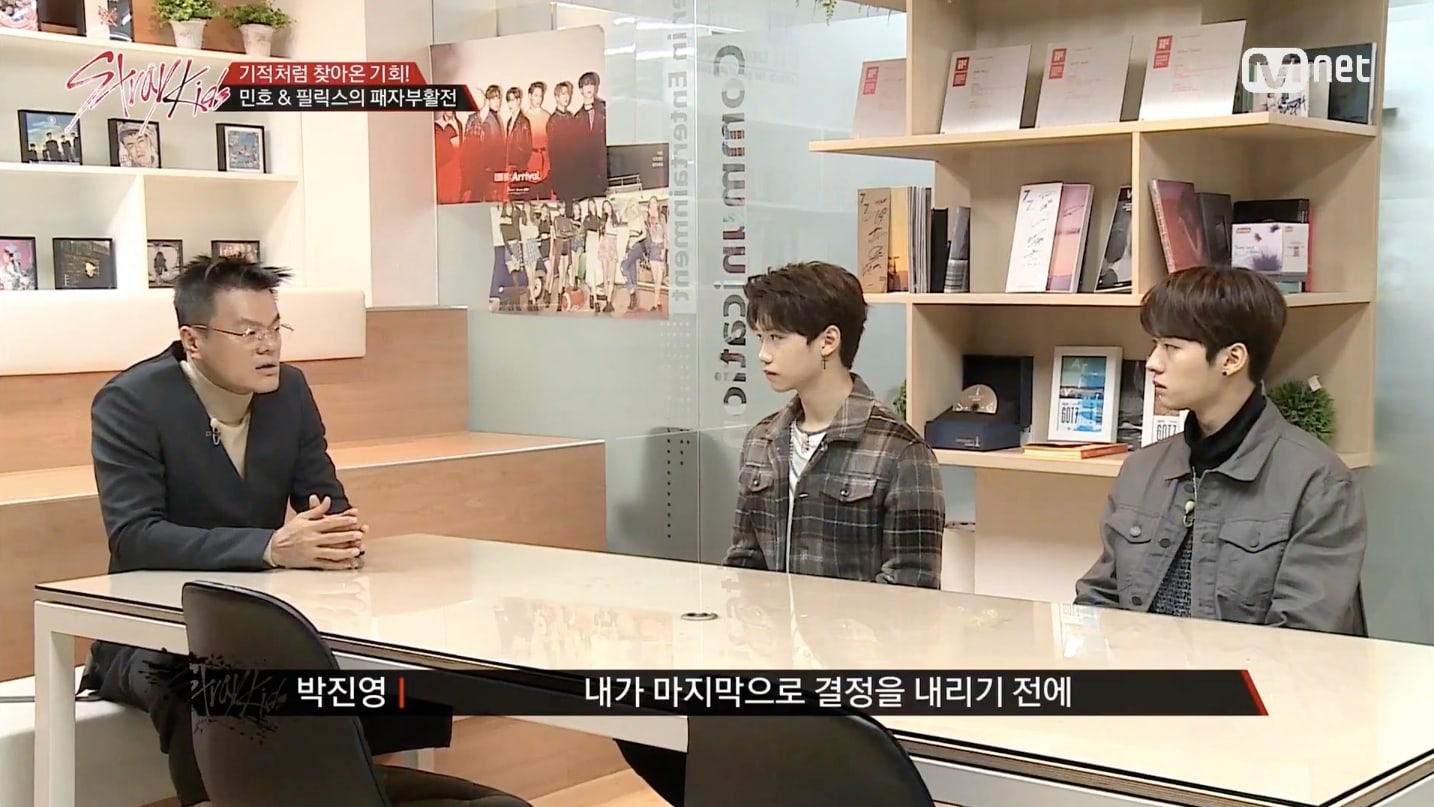 The producer explained, “That feeling of the group becoming one and having fun together—it was missing. That unexplainable charm they had during their first showcase. I don’t know if it’s a chemistry that only surfaces when all nine of them are together. I realized that I need to check one last time to see what it is.”

After bringing Felix and Lee Minho into the practice room, Park Jin Young told the trainees, “In order for me to evaluate [your performances] accurately, I’d like you to prepare both a performance with just seven members and a performance with all nine of you together. After seeing both, I’ll make my decision on the final members.”

The “Stray Kids” members, who had reacted to both eliminations with tears and disbelief, were thrilled. The seven trainees couldn’t hide their joy as they rushed to embrace Felix and Lee Minho, joking, “Why’d you come so late?” 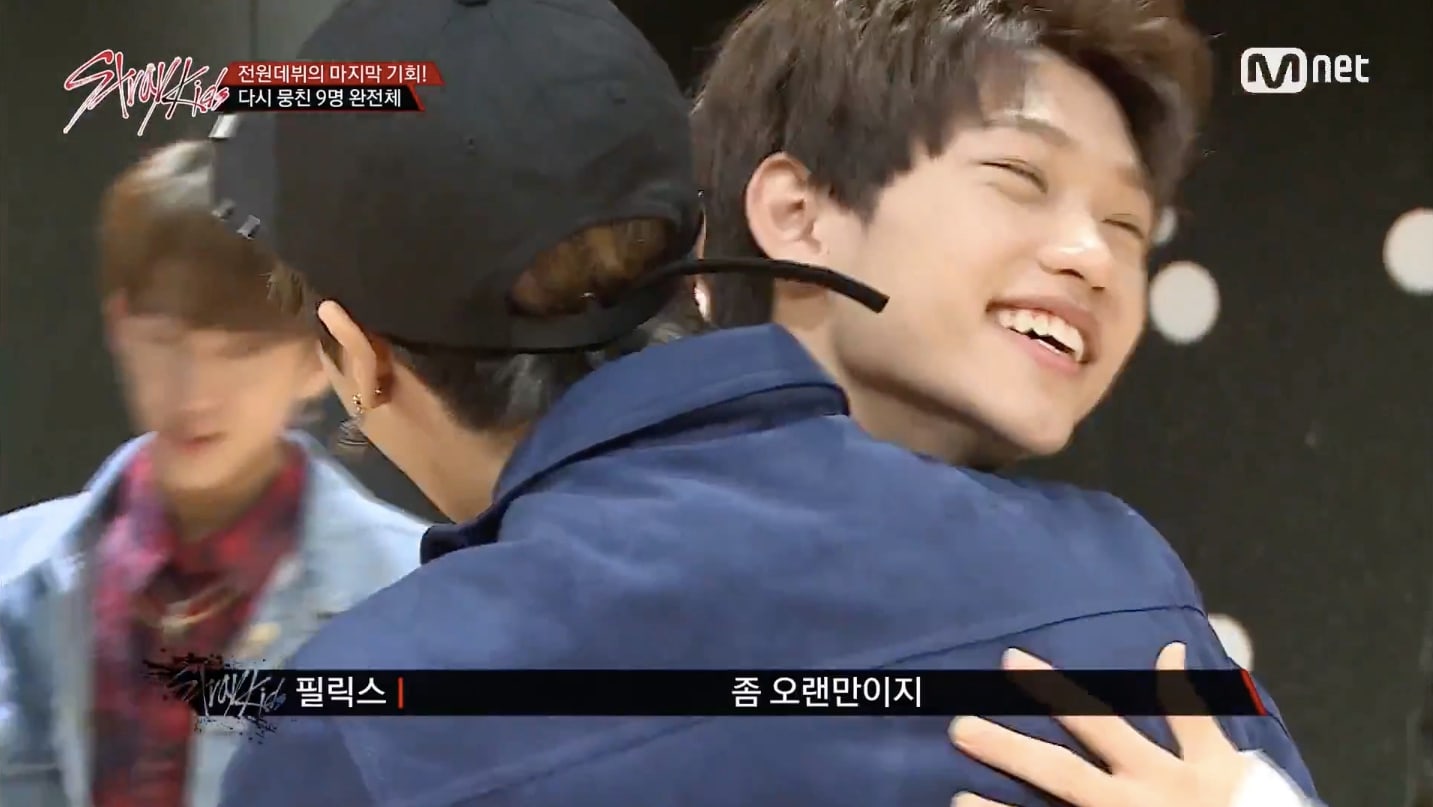 Speaking about how he felt when he heard the news, Bang Chan remarked, “I was so glad and so relieved. I was really happy.”

Han Jisung added, “Thank you, God. And thank you so much, Park Jin Young. That moment [when Felix and Lee Minho returned] was just so happy for me.”

To see all nine members perform together again, don’t miss next week’s episode of “Stray Kids,” which will air live on December 19 at 11 p.m. KST.