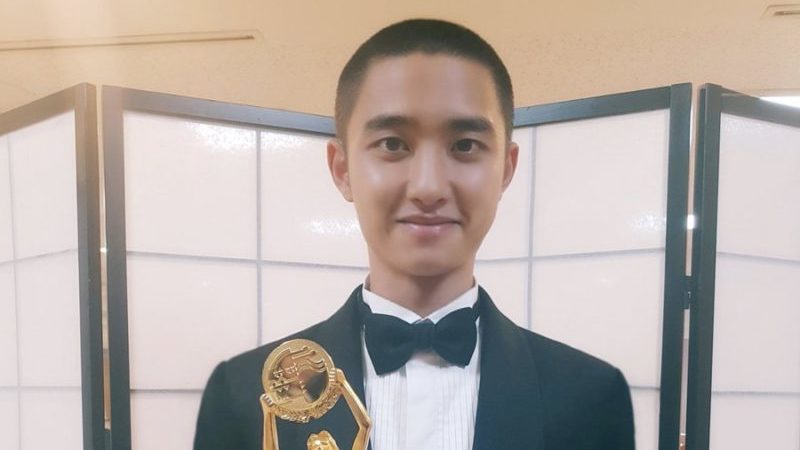 November 25, 2017 ended up being an unforgettable day for EXO’s D.O. because that was the day he won Best New Actor at the Blue Dragon Film Awards!

D.O. debuted in 2014 as an actor in SBS’s drama “It’s Okay, That’s Love,” and received much love from his fans and co-stars. After that he debuted in many more dramas and movies, earning a reputation as actor Do Kyung Soo.

During the news of his award, D.O. happened to be at Gocheok Sky Dome for EXO’s concert. He talked about the magical moment when he heard he had won saying, “I didn’t expect to win at all. To be honest, I had no chance to think about the Blue Dragon Film Awards because I was preparing for EXO’s concert that was on the same day. I was in the middle of the concert when I could hear my members saying I had won Best New Actor at the Blue Dragon Film Awards through my in-ear.”

D.O. added, “I was really shocked. It was chaotic because I was in the middle of performing, so it didn’t feel like I had really won. I never imagined I would win Best New Actor at the Blue Dragon Film Awards. It’s an award you can only receive once in your life, which makes it that much more meaningful.” He also modestly said, “I don’t think this is an award I got by my own efforts. I really want to express my gratitude to those who have helped me get this award. This makes me think that I should work harder as an actor in the future.”

D.O. shared about his members’ reactions as well. He laughed as he said, “The EXO members didn’t have much interest that I was one of the nominees of Best New Actor at the Blue Dragon Film Awards. In fact, they didn’t even know I was nominated.” Then he added, “However, they were happier than anyone else when they knew I had won. On the day of the concert, we were also having Chanyeol’s birthday party, and we had a great time celebrating his birthday and my award. As soon as the concert ended, I didn’t receive proper congratulations from my members because I was busy heading to the Blue Dragon Film Awards. However, after the awards ceremony was over, I received a lot of congratulations during our team dinner.”

EXO members weren’t the only celebrities who congratulated him. Actor Jo Jung Suk, who had filmed “My Annoying Brother” with him, sent him a text message that read, “Kyung Soo, I knew you would receive [the award]!”

On top of that, his “best friend” Jo In Sung received the award on his behalf due to his absence at the awards ceremny. During the speech, Jo In Sung said, “While we were drinking, I had told him that if [you] win the award, I’ll get it for you. I came up here because we’re close. I’ll make sure to give this to him.”

To that, Kyung Soo said, “I’m really grateful to Jo In Sung for receiving the award on my behalf. While we were drinking, I just casually told him to receive my award if I get it since I won’t be able to attend the awards ceremony. I had no idea those words would come true.” He shared his affection for the actor, saying, “Jo In Sung is truly a precious friend to me. I was very happy such a friend received [the award] for me. I was so relieved that I could relay my gratitude to him myself after going to the awards ceremony late after the concert ended that day.”