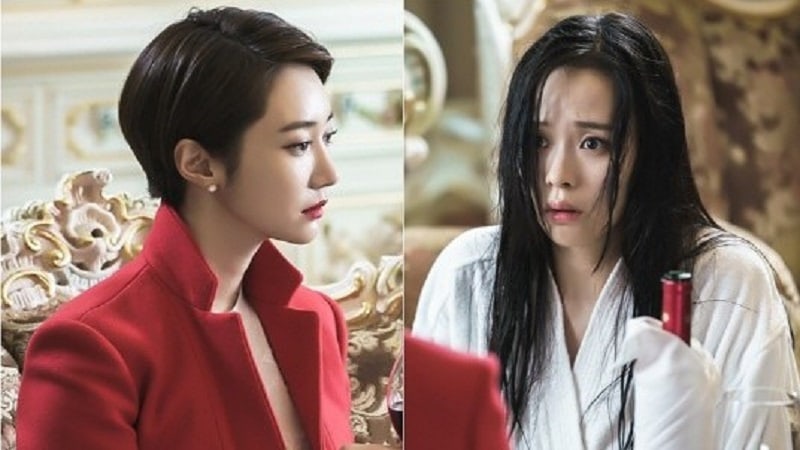 The released stills show Go Jun Hee and Ji Yoon Ha together in a hotel. Dressed in an all red ensemble, Go Jun Hee gives off a strong aura in front of Ji Yoon Ha, who stands timidly in a bathrobe with her wet hair wrapped in a towel. Go Jun Hee gives an icy stare to Ji Yoon Ha, the secret mistress of her character’s husband.

On the other hand, Ji Yoon Ha trembles under the cold gaze of Go Jun Hee. Ji Yoon Ha was startled by the sudden appearance of Go Jun Hee, while Go Jun Hee stands with a more relaxed pose. Many are curious to see why Go Jun Hee sought out Ji Yoon Ha, and what kind of threat Go Jun Hee may have made to Ji Yoon Ha. The encounter between the two women will serve as the catalyst for a new conflict between Go Jun Hee and Kim Sung Kyun’s characters. 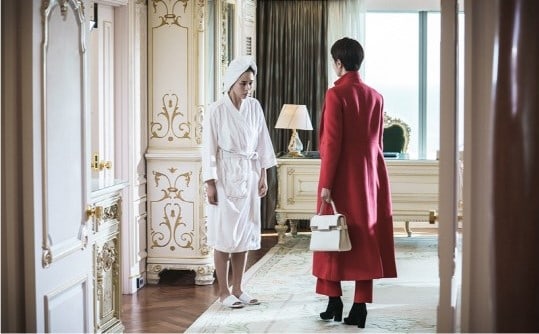 The previous episode of “Untouchable” showed the full-fledged conflict between Jang Joon Seo and Jang Ki Seo, and raised suspicions about the involvement of father and daughter pair, Goo Yong Chan (played by Choi Jong Won) and Goo Ja Kyung, in the death of Jang Joon Seo’s wife, Yoon Jung Hye (played by Kyung Soo Jin). Many are curious to see how Ja Kyung is involved with Jung Hye’s death, heightening expectations for the upcoming broadcasts of “Untouchable.”

“Untouchable” is an action thriller that follows the story of two brothers as their paths diverge. Jang Joon Seo, the younger brother, confronts his family’s greed and power following the death of his wife, while Jang Ki Seo, the older brother, becomes evil in order to live. The drama will air episode seven at 11 p.m. KST on Friday December 15 on JTBC.

Watch the first episode below if you haven’t already!