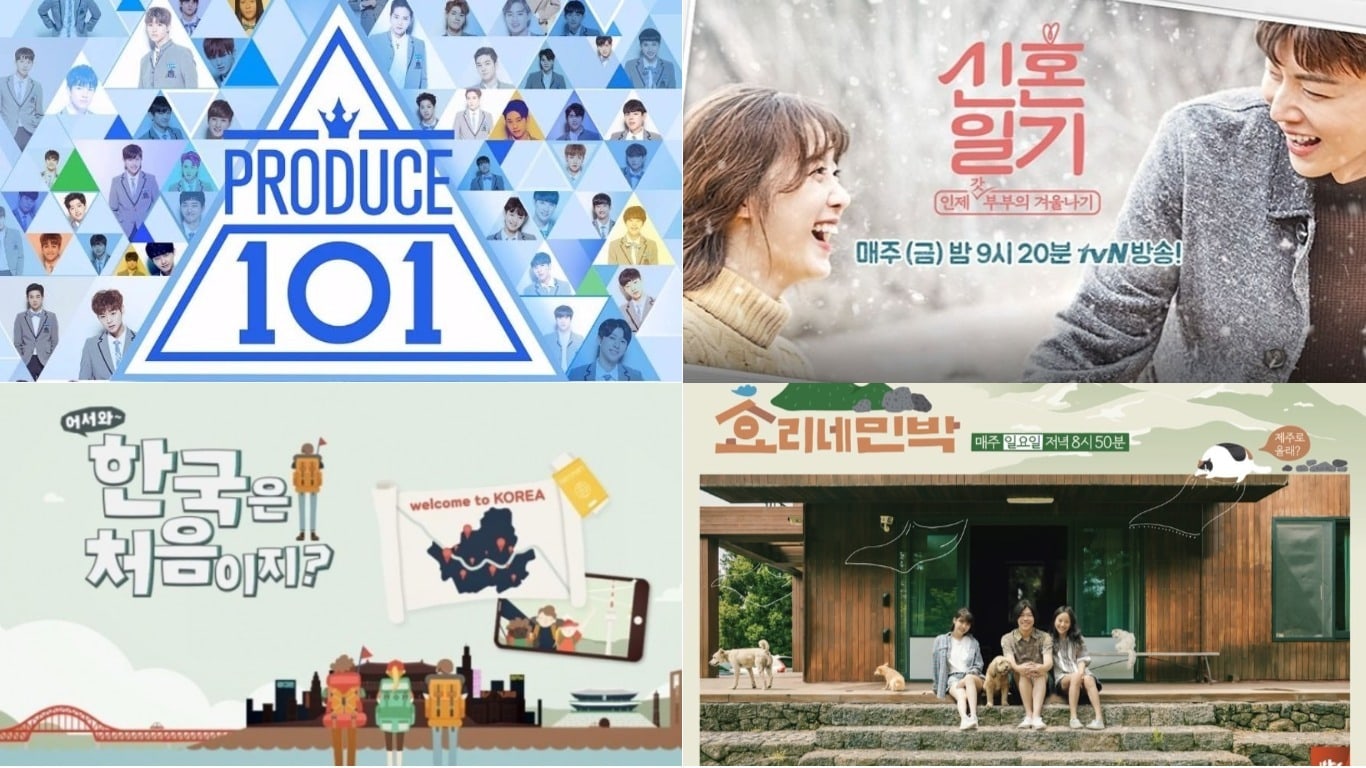 Keywords For Korean Variety Programs In 2017

As 2017 comes to a close, iMBC recently took a look at some of the hit variety programs of the past year and what they had in common.

Here are the keywords of variety shows in 2017: 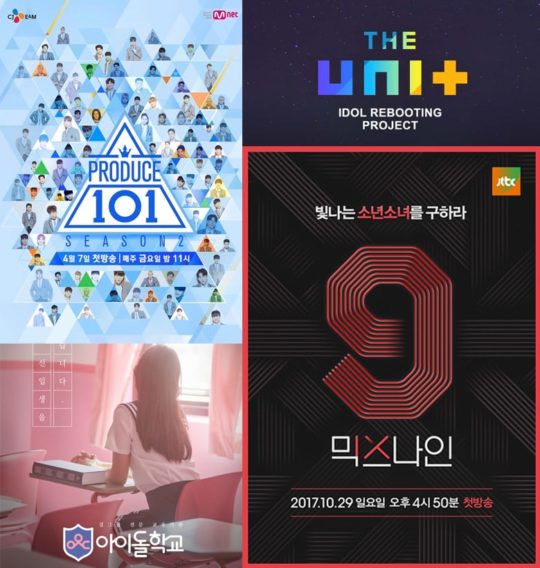 Though audition programs, also known as survival programs, have been a staple of the Korean variety scene for a long time, they hit an all-time high in 2017.

As the more traditional shows like “Superstar K” and “K-Pop Star” wrapped up or went on hiatus, Mnet’s “Produce 101 Season 2” came charging out the gate and performed even better than their popular first season a year before. The incredible popularity of the show translated into popularity for the trainees that appeared and of course for the final group that debuted, Wanna One.

The trend may continue into 2018 as the “Produce 101” series has announced a third installment, “Produce 48.” 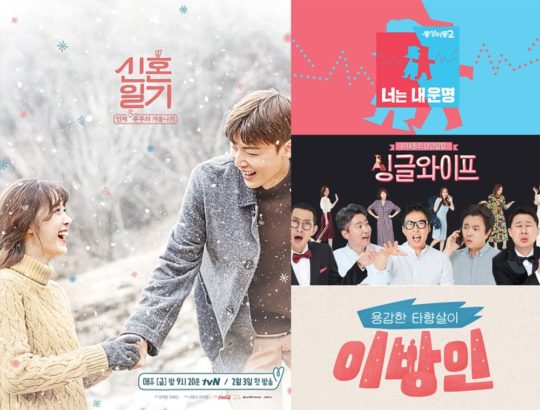 If celebrity children were the topic of conversation in 2015 and 2016, with shows like “The Return of Superman” and “Dad! Where Are We Going?,” the keyword for 2017 was “celebrity marriage.”

While everyone loves a fairytale ending, it turns out that audiences were also interested in seeing the more realistic side of celebrity romance after the wedding bells had rung. Ahn Jae Hyun and Ku Hye Sun kicked off this trend with their appearance in the new variety show “Newlywed Diary.” The popularity of their first season prompted a second season starring Jang Yoon Joo and Jung Seung Min and Oh Sang Jin and Kim So Young.

The show “Same Bed, Different Dreams” also revamped their format in their second season by showing the lives of married couples (or soon-to-be-married couples). In particular, Chu Ja Hyun and Yu Xiaoguang became a household name with their lovey-dovey appearance on the show.

Other shows like “Single Wife” and “Stranger” (literal translation) showed the married lives of celebrities audiences already knew quite well, such as Park Myung Soo, whose wife had been mentioned in passing on other shows. Again, this trend looks to continue into 2018 as “Single Wife” is planning to return for a second season. 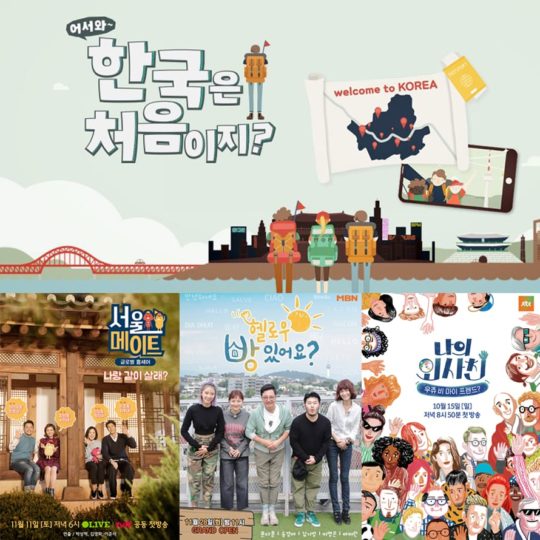 Although foreign TV personalities have always been a novelty on Korean variety shows (producing stars like Sam Hammington), the show “Welcome First Time in Korea” gained a lot of popularity in 2017. The show features people from abroad traveling in Korea, a different concept from shows like “Abnormal Summit” where foreign TV personalities showed off their knowledge of Korean language and culture. Instead, audiences seemed to find the exploration of Korean culture by new travelers to be a more interesting topic of conversation in 2017.

Other shows have hopped on this trend, including “Seoulmate,” where foreigners live with a Korean celebrity host and tour the city of Seoul, “Hello, Is There A Room Available,” where the cast open a guesthouse for foreign travelers, “The Traveler’s Guide to My Room,” where celebrities from Korea and abroad exchange rooms for five days, and “My Foreigner Friend,” where the hosts discover themselves by making friends with people from abroad. 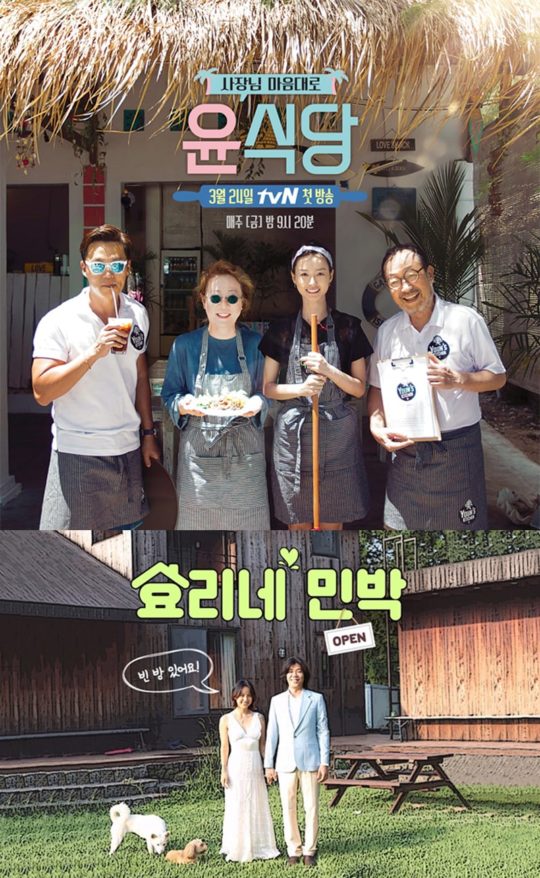 Shows that embraced the “YOLO” concept include “Youn’s Kitchen” and “Hyori’s Homestay.” Both variety shows took a much more relaxed pace, taking events as they came with heartfelt moments between the cast instead of forcing exciting new things to happen.

In particular, the shows highlighted a lifestyle that audiences could dream of having, whether it was operating a small restaurant abroad or living in a nature-surrounded house on Jeju Island. The main appeal of these shows was their focus on the warmth of ordinary life, rather than focusing on artificial settings and games.

Both “Youn’s Kitchen” and “Hyori’s Homestay” are planning second seasons in the works, which hopes to prove this keyword may become more than a passing fad. 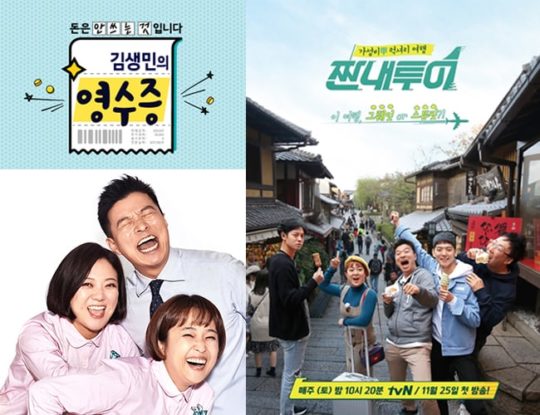 Relatability was the name of the game behind this particular keyword. Too often audiences see the glamorous and wealthy side of celebrity life, which can be great fantasies but can also feel out of touch with the viewers.

Kim Saeng Min shot to popularity in 2017, as he spun his reputation for frugality into several hit variety shows. “Kim Saeng Min’s Receipts” spawned the catchphrase “Stupid” and “Great” (for things that spent too much money or saved money respectively). The show began as a podcast and then a pilot that was picked up for regular broadcast when it became a success. Also starring Kim Saeng Min was “Salt Tour,” which focused on the aspect of traveling on a tight budget.

What other trends have you noticed in 2017 variety shows? What trends would you like to see in 2018?