EXO always gives fans something to look forward to each holiday season, and 2017 is no different. On December 26, their seven-track winter special album “Universe” was released alongside a rich, coffee-and-love-focused video for title track, “Universe.” The rock ballad takes great care to highlight each unique voice and explores not only the beauty of their singing and visuals, but also focus on the simplicity of a coffee-inspired color palette, a piano-focused accompaniment, and clear visual imagery about how these boys are ready to go to the ends of the universe and back for love.

What is so gripping about this video is how heartfelt and impactful the watching experience is while at the same time remaining understated. Distinctly lacking complexities is one of the best ways to highlight the most important parts: the EXO members’ voices, which are smooth like a great cup of coffee.

Although the teaser material and the video clearly have coffee-themes, the video really has two main points: the warm coffee imagery and the search for love. The first is created with beauty shots of the coffee-making process, from the pouring of the coffee beans into the hopper to the final pour of the caffeinated drink of champions. Coffee is a drink made to energize, but it also brings people together as we sit down with a cup and share stories of our day. Not only does it inspire companionship, but the rich earthy browns of coffee beans, the black liquid of the drink, the finely ground warm brown coffee, and the beige mixture of coffee and white milk inspire the winter dress of the dreamy EXO members as well as the wooden tables, the rope, the figurines, and all of the props.

The second point, the search for love, is where the EXO members really get to shine. The focus is on each individual as he battles his desire for love and sings about needing to find that love wherever it is in the universe. Each of them ponders over their love over pencil drawing, pulling shots of espresso, standing in a sea of white, or even being tied by rope in a metaphorical comparison to their inability to reach their love.

Expressions of desire, sadness, and even smiles as they share coffee with each other showcase how much these young men have grown over the years as singers and performers.

As the video nears the end, there are more and more shots of the boys coming together, offering each other warm drinks, which is a hopeful visual along with the breaking of the bonds that tie Kai. I really love the story behind this video and how well the entire concept comes together with the teasers, the visuals, and the song. 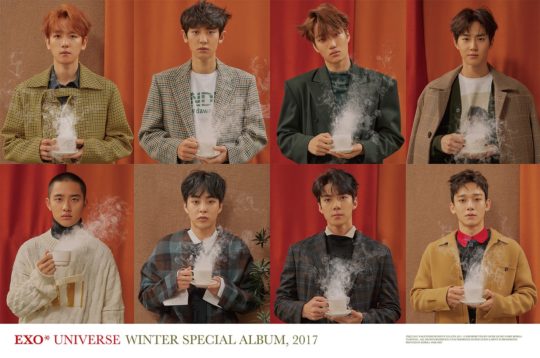 A rock-ballad penned by lyricist Yoon Sarah of “Miracles in December” and co-composed by Shin Hyuk of “Growl” and MRey, JJ Evans, and Jeff Lewis from Joombas, “Universe” is the title track from EXO’s sixth mini-album that tells the tale of a search for love to the ends of the universe. It opens with a few gentle chords from the piano and is joined by D.O.’s quiet croon in his lower register, singing beautifully rich, low notes that are then echoed by the other members throughout the song. As the song escalates to the jubilant chorus, synth strings and a drum set join the piano, and the EXO members belt a wonderful catharsis that runs into the bridge. Just after, there is a glorious silence that is broken by a quiet Suho in a denouement that is capped off by an acappella D.O.

Each voice really gets to shine as the boys explore their highs and lows, which makes it the perfect holiday song!

Raine0211 is a lover of all things Korean, especially K-pop, K-drama, and Korean food. When she’s not writing for Soompi, she’s playing the cello and singing. She happily indulges in all kinds of K-pop, but her biases are SHINee (You’ve worked hard, Jonghyun), Infinite, and VIXX. She lives in Seoul with her roommate who also loves K-pop and K-drama.