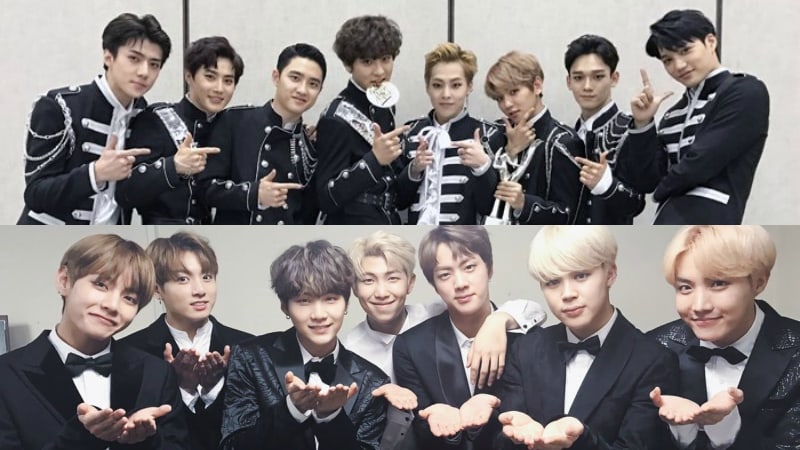 10 Beautiful Moments From The Blooming Friendship Between EXO And BTS

Belonging to the most successful K-pop groups of today, members of BTS and EXO have little to no free time, yet they manage to make friends and maintain good relationships with other idol groups in the middle of their busy schedules. Award shows, overlapping promotions, and variety programs provide the perfect opportunity for these idol interactions, and EXO and BTS often find time to greet and cheer for each other.

These precious interactions always make our hearts warmer, and it’s high time we recall the most emblematic BTS-EXO moments!

Being each other’s biggest fanboys

Baekhyun, Chanyeol, and BTS’s Taehyung are known for their reactions during award shows, and they are not ones to hold back when it comes to the other team, either.

Remember that time Chanyeol got really scared of the special effects BTS had during their performance?

Or that powerful performance of “Drop That” where J-Hope, V, Jimin, and Jin showed us their love for the song?

Can we also mention Chanyeol and Sehun’s approval of J-Hope’s and Jimin’s dance skills at 2014 MAMA?

These two puppy-like idols are known for looking similar to each other, and the fan theories of Baekhyun, Taehyung, and B.A.P member Daehyun’s visual triangle got so big, V even got asked about it on a TV show. Taehyung was very eager to explain how Baekhyun is the mom and Daehyun is the dad of their small family.

They even took a selfie together! The visual power is just too much to handle. 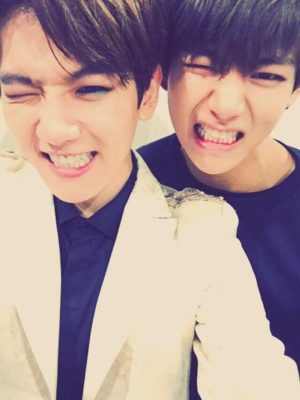 Chanyeol and SHINee’s Minho had a short interview with Jimin and SHINee’s Taemin at the KBS Song Festival, and Chanyeol got totally flustered the minute Jimin smiled at him. Every ARMY could relate to him at that moment.

Jimin is not the only BTS member charming Chanyeol with his cuteness. When Taehyung got a little screen time on MMA 2016 and acted as adorable as ever, Chanyeol couldn’t help but smile at his antics. Again, totally relatable.

Jimin and Kai in the same squad

Taemin recently talked about his close friendship with EXO’s Kai, BTS’s Jimin, HOTSHOT’s Timoteo and Sungwoon, and he even shared pictures of them having the time of their life. They have matching jackets, too. Friendship goals, right? 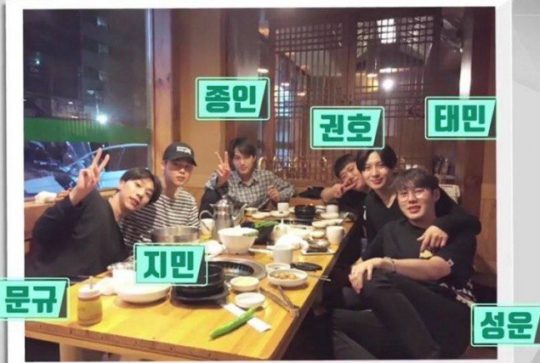 Suho and RM discussing being leaders

Namjoon and Junmyeon appeared on “Problematic Men” in 2015, and they shared their burdens of being idol group leaders. It turned out they both have the same fears and feelings, and you can see the joy on their faces when they realize they are not alone in their worries.

Dancing to “Rainism” with SHINee’s Minho

Only a few songs have the power to unite every K-pop idol, but Rain’s “Rainism” is one of those without a doubt. We need a full cover with Taehyung, Jungkook, Baekhyun, and Minho now!

All performers of the 5th Gaon Chart K-Pop Awards gathered to take some photos, and Baekhyun and Jimin used every second to chat.

Suho and V being happy together

This behind-the-scenes interaction at 2016 MAMA could end all fan wars, as the two of them are ridiculously happy seeing each other. Look at their tight hug and those bright smiles on their faces!

The Idol Olympics are the perfect place for idol interactions, and Chanyeol and Jimin wasted no time in having fun together. Even Suho joined them!

Always respecting and congratulating each other

No matter what year, music show, or award ceremony, EXO and BTS have shown nothing but respect for each other. They always take time for greetings and congratulations, and we wish to see many sweet moments between the two groups in the future, too!

Hey Soompiers! What were your favorite EXO/BTS interactions? Tell us in the comments below!

EXO
BTS
Soompi Spotlight
How does this article make you feel?