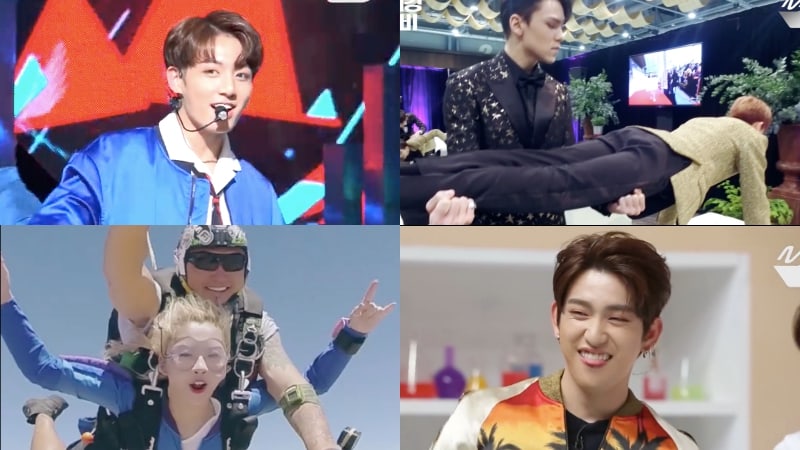 To celebrate the end of 2017, Mnet has released a list of 10 of its most popular video clips from the past year!

Mnet’s list consists of 10 of the most-watched videos on its online channel M2, with each of the 10 spots going to the clip that had the highest views in its category.

Take a look back at 2017 by checking out the list of clips below, followed by Mnet’s highlight reel at the end!

GOT7 kicked off M2’s new reality show “IDOLity” as its first guest, and the group kept the laughs coming for three whole episodes.

The episode with the highest view count featured Jackson, Jinyoung, and Mark going to hilarious lengths to satisfy their fans’ most random curiosities.

Next up was a video from Wanna One’s debut special on Mnet, in which the 11 members showed no mercy as they joked around and teased each other before the release of their very first music video.

The most-watched “MV Commentary” of the year went to TWICE, who reacted to their own music video for “Likey” while also sharing some amusing behind-the-scenes anecdotes from filming.

The seventh clip on the list was a video of “High School Rapper” finalist Choi Ha Min performing his song “Osshun Waves.”

Next was the most-viewed clip from KARD’s reality show “MEMORY KARD,” which featured the members having the thrill of their lives as they went skydiving in California.

The self-filmed music video with the highest number of views was EXID’s playful version of “DDD,” which the members obviously had a great time filming together!

Fourth on the list was a hilarious parody of “Show Me The Money,” in which one talented man imitated many of the most famous rappers to appear on the survival show.

The most-watched of M2’s “Relay Dance” clips was SEVENTEEN’s “Clap.” The surprisingly stylish video proved that all 13 members of the group own the stage even when dancing by their lonesome.

There were a lot of impressive mannequin challenge videos in the past year, but you won’t want to miss out on SEVENTEEN’s epic version of “BOOMBOOM.”

With poses ranging from hilariously creative to ridiculously difficult, it’s amazing that the members didn’t crack up during filming.

The highest view count of the year went to Jungkook’s MPD fancam for “DNA,” which followed the BTS member throughout his dynamic comeback performance on “M!Countdown.”

Did these clips take you back? Which was your favorite? Leave your thoughts below!

You can also check out M2’s highlight reel here:

GOT7
TWICE
EXID
BTS
SEVENTEEN
KARD
Wanna One
Jungkook
Show Me the Money
Choi Ha Min
IDOLity
How does this article make you feel?