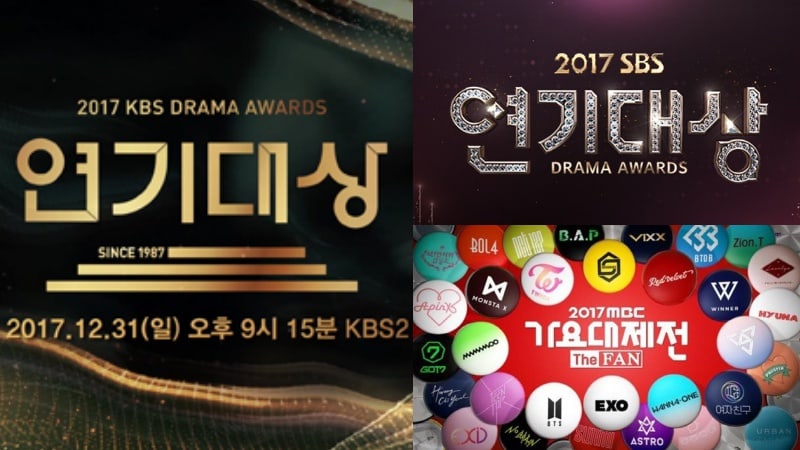 On December 31, all three major broadcasting stations held end-of-the-year ceremonies to celebrate the achievements of the past year.

According to statistics released by Nielsen Korea, the 2017 KBS Drama Awards had the highest viewership ratings out of the three programs with the first half scoring 11.8 percent and the second half bringing in ratings of 11.9 percent.

The highlight of the night was when the Grand Prize was awarded to both Kim Young Chul and Chun Ho Jin for their roles in “Father Is Strange” and “My Golden Life” respectively. Kim Young Chul named all of the cast members of “Father Is Strange” in his acceptance speech to express his gratitude towards them and also thanked his family for their support. Chun Ho Jin dedicated his award to all parents in the world and thanked his wife as he said, “It took me 34 years to fulfill the promise I made to you while we were dating. I’m so sorry for being so late. If you will allow it, I’d like to spend my left life with you once again.”

You can check out who took home awards at the 2017 KBS Drama Awards and watch the awards ceremony below!

The 2017 SBS Drama Awards brought in ratings of 8.3 percent for its first half and 8.8 percent for its second half. Ji Sung took home the Grand Prize for his role in the drama “Defendant,” and he enjoyed the honor alongside his wife Lee Bo Young, who won the Top Excellence in Acting Award for her role in “Whisper.” Dedicating the award to his co-star Uhm Ki Joon, Ji Sung reminisced about his acting career as he stated, “I am grateful to all the people who have helped me when I needed it for the past 19 years. I will keep that warmth and pass it along to my juniors when they need my help.”

See who else won at the awards ceremony and catch up with the 2017 SBS Drama Awards!

Overall, the end-of-the-year event with the highest viewership ratings was the 2017 SBS Entertainment Awards, recording ratings at 13.1 percent and 13.8 percent for its first and second half respectively.