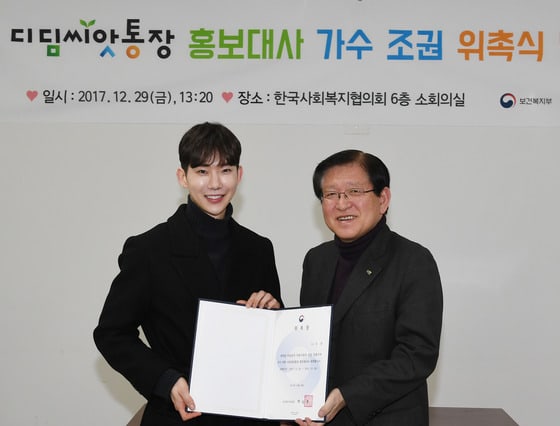 Singer Jo Kwon has been named an honorary ambassador of the Didim Seed Bank!

The Didim Seed Bank is an initiative led by the Ministry of Health and Welfare and the Korea National Council on Social Welfare. It was implemented to aid children of low-income households become independent as they grow older and enter into society by helping cover expenses related to tuition, housing, medical care, technical career training, marriage, and other life activities. The process involves monthly donations of up to 40,000 won (approximately $37.6) that are saved in a fund that the children can have access to once they become adults.

Jo Kwon attended the “Didim Seed Bank honorary ambassador appointment ceremony and fansign event” on December 29. With his new responsibility, Jo Kwon will deliver hopes and dreams to children of low-income households by raising awareness, offering support, and donating his talents and skills to help them.