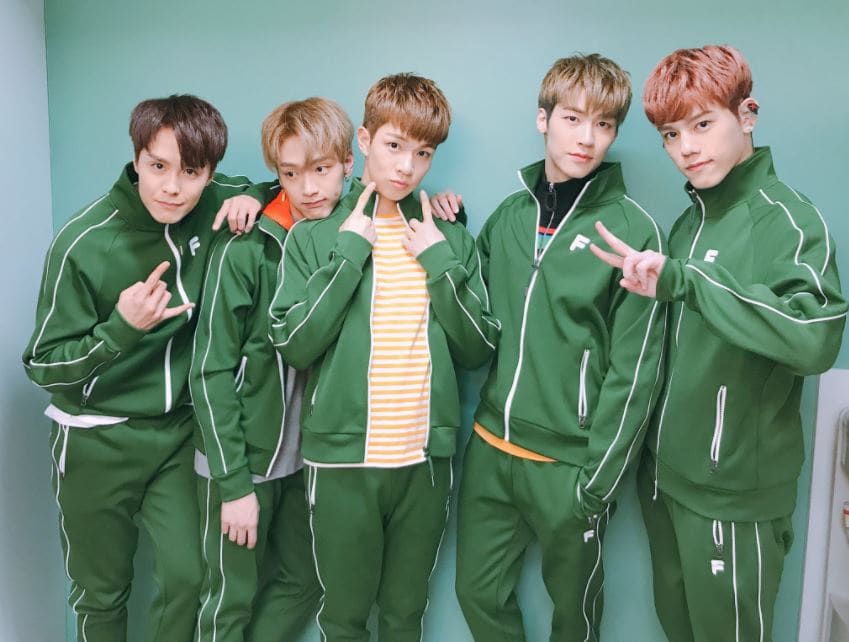 N.Flying Talks About Goals As A Group And For Their New Track

On January 3, N.Flying held a showcase for their third mini-album, “The Hottest: N.Flying,” and talked about goals for their new track.

The band opened with their title track, “Hot Potato,” giving an energetic and humorous performance. Afterwards, the group shared that the album was filled with their stories. And like the album name, their goal was to become “the hottest” band in the world. Yoo Hoe Seung commented, “Even though we aren’t a world-famous band yet, as we recorded ‘Hot Potato,’ I thought about N.Flying’s future.” Kim Jaehyun stated, “I thought of our senior labelmates, FTISLAND and CNBLUE while singing.”

When asked why the group went with a retro concept, N.Flying answered, “Isn’t the trend retro these days? Not only that, but as we took into consideration the members’ music styles, we eventually chose this concept.” Kim Jaehyun, who plays the drums in the band, further explained, “The drum’s snare is steel, so I can express the vintage sound in ‘Hot Potato’ better.”

Although the band made their comeback on January 3, their comeback was originally announced to be on December 7. The band’s leader Lee Seunghyub addressed their postponed comeback and commented, “There was a problem with the mastering and so our comeback was postponed. We were able to put more effort into showing our fans a better performance.”

Cha Hoon then highlighted the key points of their title track. He pointed out Lee Seunghyub and Yoo Hoe Seung’s ad-libs in the intro, and shared, “The two spontaneously did the ad-libs on stage, so it’ll be interesting to see how this part changes on music programs.”

The band also revealed behind-the-scenes stories of their music video shoot. Yoo Hoe Seung stated, “There’s a scene where Lee Seunghyub campaigns in an election and we filmed it five minutes away from my house. We were working hard at filming, and we noticed that there was one man who was standing and watching us for a while. We thought, ‘Who is that man?’ and later realized it was my dad.” The other members also shared, “That night, our parents made us bone stew and stir-fried pork and so we were able to film the next day with a lot of energy.”

Yoo Hoe Seung was asked how it felt to be promoting his second album as a member of N.Flying. He stated, “After ‘Produce 101 Season 2,’ everything that happened until now seems to have flown by. It seems like such a dream, that I’m always nervous.” He commented, “Recently, we’ve been abroad a lot, whether it’s for our showcase in Taiwan or our concert in Japan. Whenever I write that I’m a singer on my immigration form, I think, ‘I’m now a singer,'” to which the other members also agreed. Yoo Hoe Seung continued, “I’m living every day to make sure I provide support to N.Flying,” to which Lee Seunghyub shared, “After Yoo Hoe Seung joined as a member, we were able to widen our musical scope,” and Kim Jaehyun added, “We’re also working hard to become good members to Yoo Hoe Seung.”

The group also revealed their goals for this album. Lee Seunghyub shared, “This track was filled with our hope to become the best as we practiced hard for it. I’d like to perform ‘Hot Potato’ as a cheer song for the athletes who are practicing for the 2018 Pyeongchang Olympics.” Kim Jaehyun also promised, “If we win first place in a music program, we plan on buying our fans tornado potatoes.” Kwon Kwangjin made the others laugh by stating, “The Pyeongchang Olympics are being held in Gangwon province. They’re known for their potatoes; it makes me want to film a commercial.”

The band concluded by promising that they would work hard during their promotions for their new album.

Watch the music video for “Hot Potato” below!