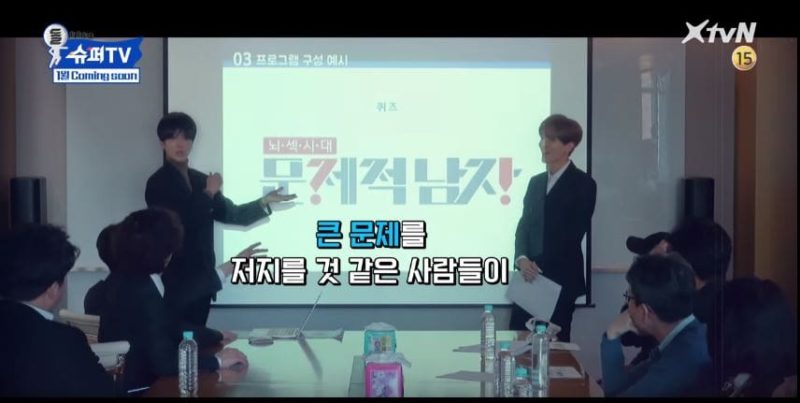 Recently, Super Junior confirmed the launching of their reality show “Super TV,” and on January 4, a teaser featuring the participating members was released.

In the short preview, Super Junior and three production members representing tvN, including producing director (PD) Na Young Suk, are sitting in a conference room looking both nervous and tense. The scene cuts to leader Leeteuk declaring, “While there are some who are less crazy, there is no one who is not crazy,” and that’s when the craziness begins.

Each of the members come up with ridiculous yet humorous ideas for their upcoming variety show. Kim Heechul suggests that one person should experience life in an actual prison while Shindong brings up eating three frozen meals per day.

When Yesung brings up the idea of people who seem as if they’re going to cause serious trouble for a parody of tvN’s actual program, “Problematic Men,” Heechul declares, “And then we’ll send those people to prison and make them experience prison life!” Eunhyuk adds onto the idea by saying, “They’ll have three frozen meals there.”

Despite the eccentricity of the ideas, Na Young Suk seems impressed as he says, “If it’s a concept like this, I want to try it myself.”

Super Junior’s new show will premiere on January 26. Watch the hilarious preview below!