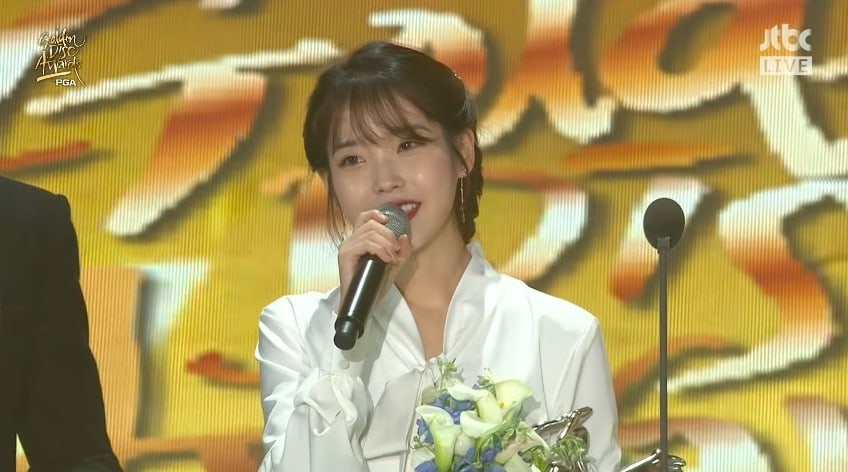 IU has taken home the Grand Prize (Daesang) at the first day of the 32nd Golden Disc Awards.

Day one of the two-day celebrations of the past year’s music took place on January 10, with the show hosted by Lee Seung Gi and Lee Sung Kyung. With the first day focusing on recognizing achievements in digital music releases, the night’s biggest award was the Grand Prize.

IU received one of the 11 Bonsang awards given out at the ceremony, and the winner of the Grand Prize was chosen from this list of artists. IU went on to receive the Grand Prize, and during her acceptance speech she thanked everyone who helped with her achievements this year. She also talked about her sadness following the passing of SHINee’s Jonghyun and expressed her hopes for all artists.

IU said in her acceptance speech, “‘Through the Night’ came out last March. Thank you to everyone who’s kept loving it for the past four seasons, through spring, summer, fall, and winter. Ever since I received the demo, and while I wrote the lyrics and worked on it, I’ve felt like I’m so lucky that this song came to me. Since it’s been lucky for me until the end, I’m so grateful for the existence of ‘Through the Night.'”

“I particularly want to thank the composers Kim Je Hwi and Kim Hee Won who gave me this song,” she continued. “They are very young and talented musicians, and I hope they will have greater opportunities this year and be recognized. Congratulations on being Grand Prize-winning composers, and thank you!”

She was also sure to thank her “IU team” of staff and told them to have a celebratory dinner, thanked the musicians and MV director, and expressed her love for her fans. She also congratulated all the artists there, as well as their staff and fans, and told them they’d worked hard. 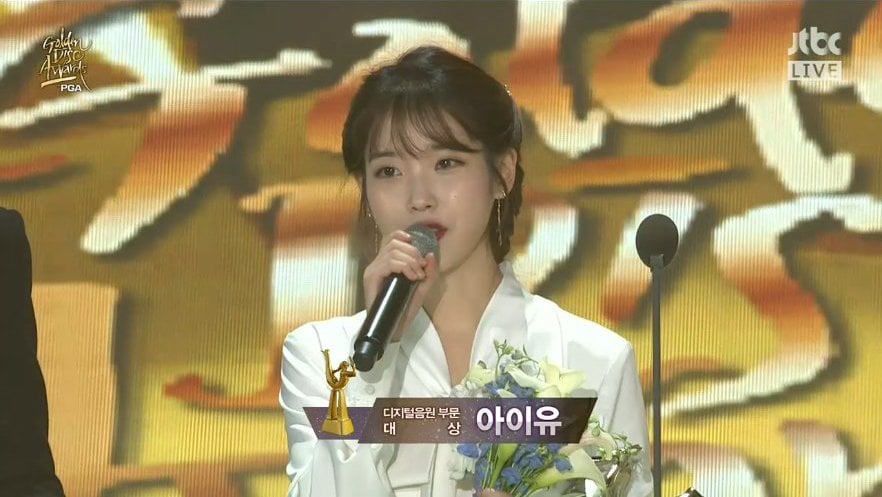 She went on to say, “To be honest, I’m still very sad. I had to say goodbye to someone who was very precious to me as an artist, a friend, and a musician. I think I understand to some degree how hard and painful it was for him, and because it’s not a feeling that I am completely unfamiliar with, I still feel very sad and sorry.”

“I think that many people other than just me are also sad,” she said. “It’s a shame and even more sad that we all busy with things to do tomorrow and we have to worry about what’s happening a month from now, and make plans for the next year, so we can’t let ourselves feel this sadness as much as we need to. I hope that you will let natural things show and accept them naturally, like feeling happy when happy, crying when sad, feeling tired when hungry, and slowing down when sick.”

“In particular, as artists, we are people who comfort other people, and so while it’s good to have a professional mindset, I truly hope that no one becomes more sick and pained after not first looking after ourselves as people and comforting ourselves, and not showing how we feel,” she said.

She added, “You’ve been busy today and will be busy again tomorrow, so while you might not have enough time, I hope that the people who won today will celebrate and enjoy today to its fullest and then sleep well. I will too. Thank you!”

IU then performed an encore performance of her song “Through the Night.”

The next night of the 32nd Golden Disc Awards will recognize achievements in physical music releases in the past year, and will be held on January 11.

IU
32nd Golden Disc Awards
How does this article make you feel?