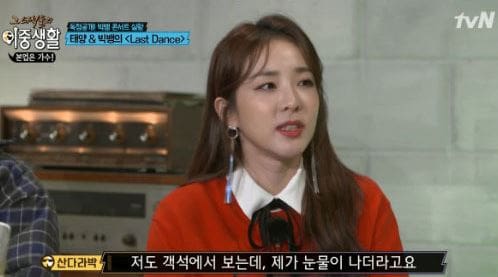 Sandara Park admitted she cried at BIGBANG’s recent concert during a guest appearance on the January 11 broadcast of tvN’s “Livin’ the Double Life.”

In the episode, the passionate scene of BIGBANG’s final concert before Taeyang’s and G-Dragon’s enlistments was shown. Sandara Park, who had attended the concert that day, confessed to the show’s panel, “I was watching from the audience and I cried, since I’ve been going to BIGBANG’s concerts for ten years now.”

Taeyang also talked about the concert and his mandatory military service.

When asked if it feels real that this was his last concert before going into the army, Taeyang admitted, “I still feel like I’m going to prepare and release something next year. I strongly wonder, ‘I’ll be able to do this life forever, right? It will continue, won’t it?’ It doesn’t feel real at all.” 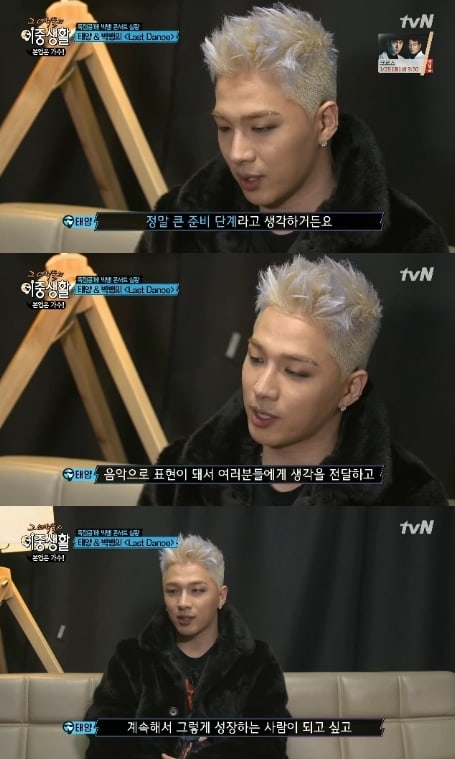 Pertaining to his military service, Taeyang said, “[My enlistment] will be the preparation stage for the second half of my life. I’m going to prepare very well and fulfill my service well in order to grow as a better man and person. I’ll express that through music and convey it to everyone. This way, I will become a mature person who continues to grow.”

Sandara Park
BIGBANG
Taeyang
Livin' the Double Life
How does this article make you feel?