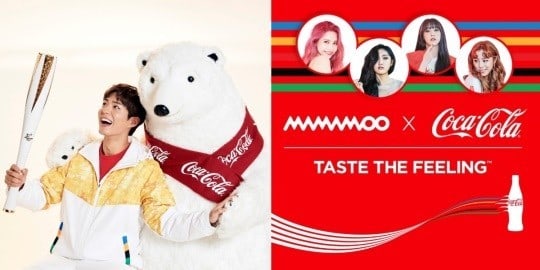 MAMAMOO and Park Bo Gum will be joining the official Olympic torch relay for the 2018 PyeongChang Winter Games!

The actor and all four members of the girl group will be joining the relay on January 16 in Yeouido, Seoul. Both of them have professional relationships with Coca-Cola, who is sponsoring the relay and the Olympics.

Park Bo Gum has been acting as a campaign model for the PyeongChang Olympics since last February with renowned former figure skater Kim Yuna. As part of the campaign, he had previously recorded a short video encouraging citizens to sign up for the relay as well. MAMAMOO released the PyeongChang promotional single “Taste the Feeling” with Coca-Cola last November.

After participating in the relay, MAMAMOO will perform “Taste the Feeling” at the congratulatory concert in Yeouido’s Hangang Park.

The torch relay began on November 1 in Incheon and is planned to take place throughout the nation over 101 days. After going around the country, it arrived back in the Seoul area on January 13. The relay was kicked off by figure skater You Young and has included celebrities like Yoo Jae Suk, Suzy, and Cha Seung Won.

The torch will be carried into the Olympic stadium on February 9 to kick off the Winter Games.

MAMAMOO
Park Bo Gum
2018 PyeongChang Olympics
How does this article make you feel?