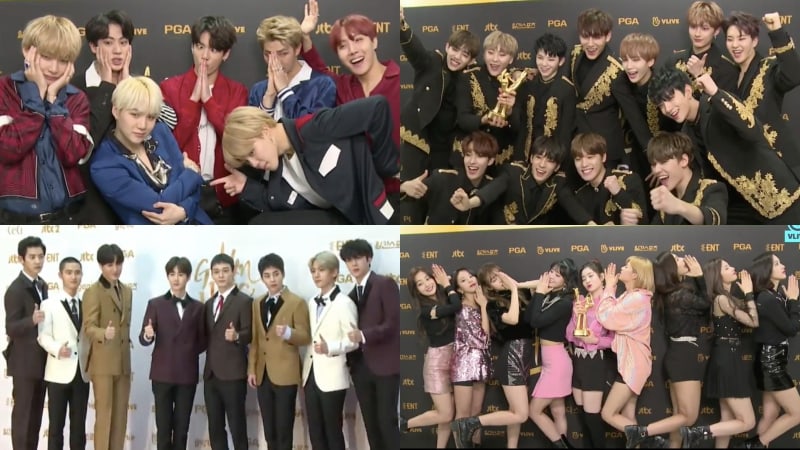 CeCi Magazine has released new behind-the-scenes footage of the winners of the 32nd Golden Disc Awards!

The magazine, which will feature the Golden Disc Awards winners in a special pictorial for its February issue, has shared a sneak peek of its footage from behind the scenes of the award ceremony.

Another clip shows a few of the winners posing for their celebratory photo shoot after the show. In accordance with the “waiting room” theme of the shoot, girl groups TWICE, Red Velvet, and GFRIEND went for a casual look, lounging around on sofas and feeding each other snacks.

BTOB took things a step further—the members were their usual playful selves as they fooled around, striking the most dramatic poses imaginable.

The video also features a brief glimpse of singer Suran and band Hyukoh.

The next clip features the winners of the second night of the ceremony, which honored achievements in physical album releases. BTS, EXO, Super Junior, SEVENTEEN, NU’EST W, TWICE, and Hwang Chi Yeol were all smiles as they waved to the camera backstage.

NU’EST W and SEVENTEEN both looked dashing in their monochrome suits as they posed for photos backstage. When asked to smile for the camera, the SEVENTEEN members laughed as they declared, “I love CeCi!”

CeCi also released an amusing video of MONSTA X acting natural—or at least trying to—while posing for the waiting room-themed pictorial. Shownu jokingly insisted that the photographer caught him in the midst of reading a book, while Wonho went about applying makeup on his fellow members like a pro.

Congratulations again to all of the winners!