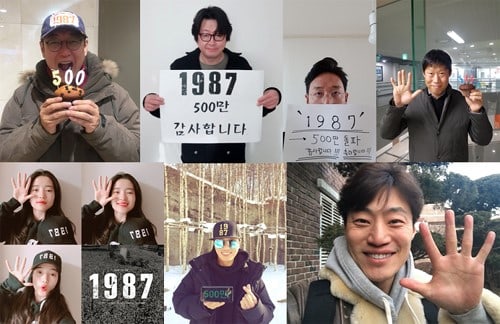 The cast of film “1987” took to social media to celebrate the significant milestone of five million moviegoers.

According to the Korean Film Council, “1987” had attracted 43,000 moviegoers on January 13, bringing its total to over 5.37 million. The film achieved this feat in 18 days. The cast, including Kim Yun Seok, Ha Jung Woo, Yoo Hae Jin, Kim Tae Ri, Park Hee Soon, and Lee Hee Joon, along with director Jang Jun Hwan, took to social media to thank the public for their support.

“1987” follows the story of those who sought to uncover the truth surrounding the death of a college student who died while being interrogated by the police. The film was first released on December 27 and rose to the top of the box office on January 8, maintaining that position till now.

The emotional real-life story the film is based on, along with the dedication from the cast and crew has been drawing a positive response from all generations. The movie has been steadily gaining traction by word of mouth, and it’s expected to reach more milestones in the future.

Congratulations to the cast and crew of “1987”!

1987
How does this article make you feel?