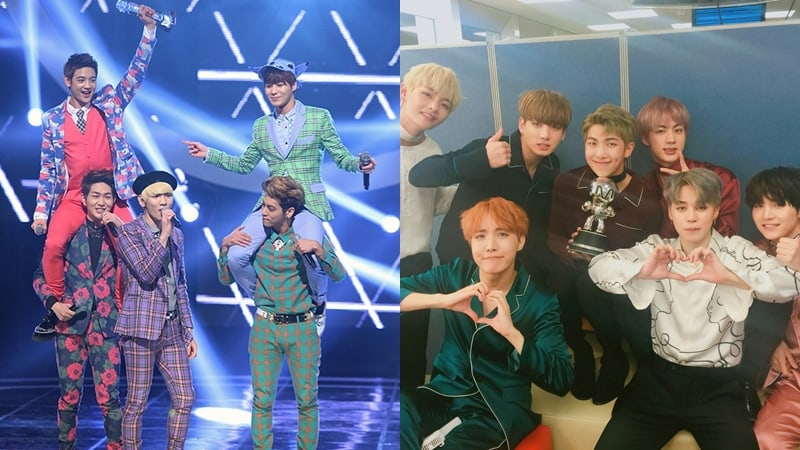 10 Unique No.1 Promises That Were Fulfilled During Music Show Encores

The first win on a music show is one of the most unforgettable moments in a K-pop artist’s career. To encourage their fans, idols sometimes tend to make interesting promises upon getting nominated on music shows for their currently promoted songs.

Here are some of the most unique music show No.1 promises that were fulfilled during encores!

Written by the late member Jonghyun, “View” is one of SHINee’s most awarded songs in music shows. Upon receiving their sixth win, the boys promised Shawols a human hamburger, to which they gladly obliged with the flaming charisma Minho laying at the bottom and Jonghyun showing a bright smile.

Jonghyun, you will always be remembered.

Yes they did! MAMAMOO received a notable recognition for their latest comeback, with “Yes I Am” landing its sixth win.

As a thank you, the serenading quartet offered Moomoos the best fanservice: a live mukbang during their encore. While the rest of the members were trying to balance between receiving their dishes and singing their lines, Hwasa was the first one to grab a bite and it looks like the ramyun was too hot for her!

Throughout the years, Teen Top received a fair amount of music show wins for their title tracks, with “Warning Sign” being one of them.

To show Angels their appreciation for their second win, the idols made a hilarious promise: they paired up and performed the encore while giving each other piggyback rides.

Red Velvet’s comebacks always come with a flavor, and their wins are no different.

While promoting their catchy track “Dumb Dumb,” the enthusiastic ladies kept their word for their fourth win encore and served ReVeluvs a laid-back performance, hilariously in contrast to the original choreography, which is known for being one of their most energetic dance routines!

All hail the idol kings of hilarity! When it comes to being extra, BTOB undoubtedly owns the throne.

Since Sungjae wasn’t present for the group’s win during their previous promotion, he was happy to join them during their first win for “Remember That.” He also revealed that he promised Melodies to rub his face against Changsub’s if “Remember That” won. The outcome is purely entertaining!

Talk about a winning streak! As “LUV” dominated music shows upon its release, receiving a total of 17 wins, the hit song garnered a wide range of love and attention.

In return, Apink made sure to show Pink Pandas their gratitude by delivering a brand new version of the song. In fact, to celebrate their sixth win encore, the lovely ladies performed a light-hearted version, in contrast to the original choreography which is more solemn.

It seems like the Bangtan boys have a history of fulfilled promises to ARMY: from dancing to “Coming of Age Ceremony” to drinking water from the trophy, their pledges are as versatile as their style.

Yet, the most unique one has got to be their lipstick celebration when “I Need U” was awarded a second win. Who knew that red would look so good on them?

EXID made sure to grant LEGOs yet another funky version to celebrate their sixth win by cutely attempting to write their names through a butt dance while maintaining the song’s original choreography.

Winning music show awards is a given when it comes to EXO! Still, that didn’t stop the boys from hyping their anticipated third win for “Power,” promising Exo-Ls that they would reenact Kai’s powerful spin from the choreography together as a group if they won.

Eventually, they ended up doing a delicate version of the spin, but one thing was for sure: the outcome was powerful!

Rising up with a new name, Highlight carried out their legacy with more wins!

The great thing about this promise is the memorable throwback: Kikwang told Lights that the members would celebrate their seventh win for “Plz Don’t Be Sad” by wearing masks that featured his face from his solo debut days as “AJ,” much to the fans’ enjoyment.

Which music show No.1 promise is your favorite? Let us know in the comments below!