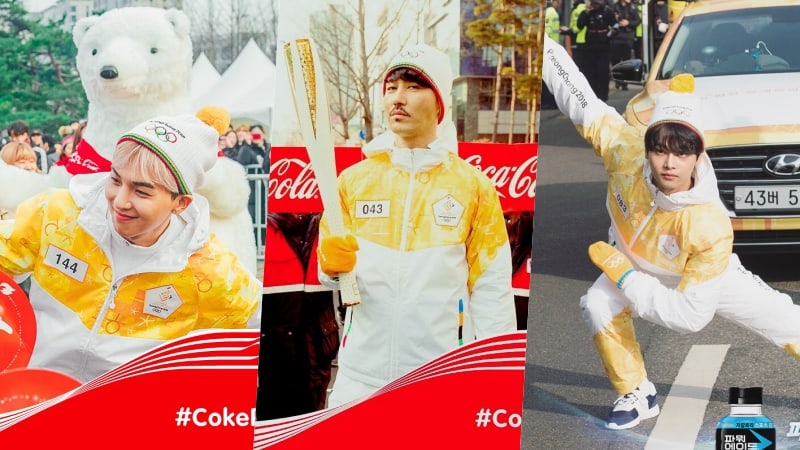 WINNER’s Song Mino, Cha Seung Won, VIXX’s N, and Jinusean’s Sean were the next round of celebrities who became torchbearers for the 2018 PyeongChang Olympics. Other celebrities who also participated in the relay were Jung Kyung Ho, Kim Jun Hyun, Sam Hammington, and more.

The 2018 PyeongChang Olympics uploaded clips and photos of the celebrities as they cheerfully ran their segment in the torch relay, bringing the flame from Greece one step closer to PyeongChang.

The stars also appear to have had some fun with their segments of the relay.

Cha Seung Won was his usual charismatic self as he carried his torch. People were heard chanting, “Ma Wang, Ma Wang,” referring to his current on-screen character in “Hwayugi,” to which he dramatically stopped and posed with the torch.

VIXX’s N was a ball of energy as he jumped around, even convincing the guards accompanying him to jump with him. He continued to have fun during his segment, as he pretended to be a speed skater and danced adorably. He concluded with an adorable forehead-to-forehead pass with the next torchbearer.

Sean and his group enjoyed themselves as they took turns holding the torch and even dabbed playfully. They finished off their part of the relay with a group jump photo.

The celebrities then commemorated and shared their experience in the torch relay.

Song Mino posted a photo of himself in front of the official CokePLAY banner, with the caption, “2018 PyeongChang Winter Olympics, Fighting!”

Cha Seung Won uploaded a photo of his usual charismatic self holding up the torch, and used the hashtags, “PyeongChang Winter Olympics,” “Torchbearer,” “Hwayugi,” “Korea,” “CocaCola,” and “I support you.”

N posted an adorable pose of himself and shared, “Today’s record 20180115, speed of light, an energetic jump, Republic of Korea fighting!! I was able to have fun and finish thanks to the warm weather and everyone who came to support! Thank you to Coca Cola and Powerade for giving me such a great opportunity!”

Sean uploaded a photo of himself posed cheerfully with the torch, and wrote, “I ran hard as a 2018 PyeongChang Winter Olympics torchbearer! It’s been 30 years since the last Olympics in Korea. I’m so thankful that I could run as a torchbearer for what might be a once-in-a-lifetime opportunity. There’s now 25 days left until the 2018 PyeongChang Winter Olympics, fighting to all the Korean national athletes!”