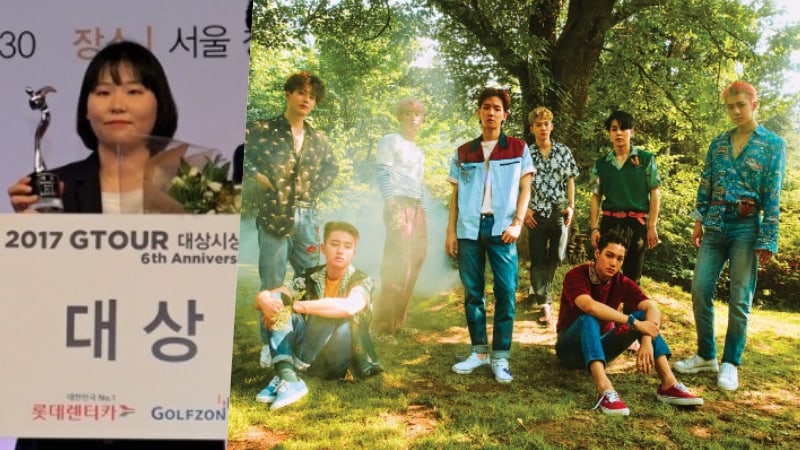 Professional golfer Jung Seon Ah has expressed her love for EXO once more.

On January 15, the “2017 GTour Awards Ceremony” was held and Jung Seon Ah won the Grand Prize. The golfer had had a very successful season as she won two victories as well as placing in the top 5 in all competitions. She was heralded as this season’s best player, with 6,450 Grand Prize points and has won a total of 42,393,000 won (approximately $39,800). This is her second time winning the Grand Prize since the 2015-16 season.

In her acceptance speech, Jung Seon Ah expressed her appreciation for receiving the prize again and promised to work harder to become a better athlete in 2018. She also thanked her parents as well as her aunt for their support. The golfer then showed off her love for EXO as she commented, “EXO has won a Grand Prize. Xiumin once beautifully said, ‘Let’s shine together.’ When I came up on stage today, I thought of that saying. Although they’re not up here with me, I feel as though we’re shining brightly together, so I’m happy.”

Jung Seon Ah previously shared her love for EXO, revealing herself to be a fan of EXO’s Xiumin. She explained that EXO had been a driving force for her WGTOUR win, and how she was glad she had won so that she could go see EXO’s concert with a peaceful mind.

EXO
Jung Seon Ah
How does this article make you feel?