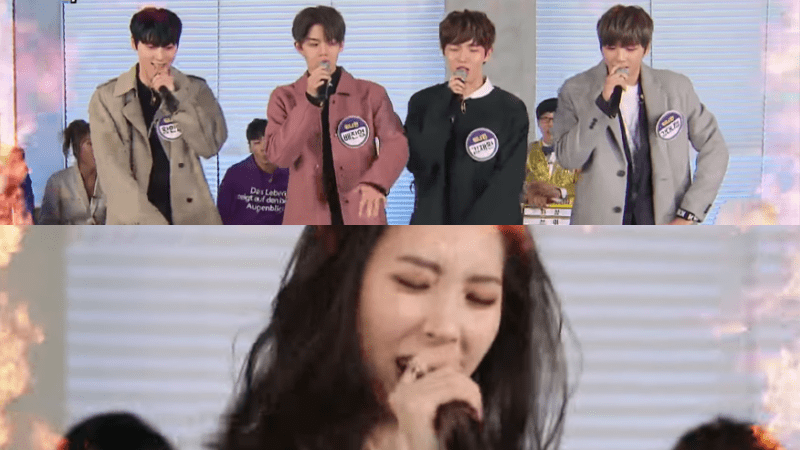 Watch: Wanna One And Sunmi Try To Score High With Covers Of BLACKPINK And TWICE

During their guest appearances on the January 18 broadcast of KBS2’s “Happy Together,” Wanna One, Sunmi, Wheesung (Realslow), and Hong Jin Young showed off their talents as they covered popular tracks from other singers.

For this karaoke corner, the guests must wait until an unsuspecting customer from one of four pre-designated rooms chooses to sing their song within a designated time period. The first guest singer to have one of their songs chosen gets to leave first, all the way until the last singer remains. Each of the celebrity guests also have an opportunity to randomly choose a benefit that may help them aid them in the mission.

Ahead of the actual mission, the four guests each had to sing anything of their choice, and whoever had the highest score based on the karaoke machine would get to pick a benefit first.

Wheesung started out by covering Primary’s “See Through,” before Sunmi stepped up to mic to sing TWICE’s “Cheer Up.” While she had a couple of slip-ups, she pulled through and gave a crowd-pleasing performance.

In the end, Wheesung scored the highest, followed by Wanna One, Sunmi, and Hong Jin Young.

Check out everyone’s covers below!

Wanna One
Happy Together
Sunmi
How does this article make you feel?