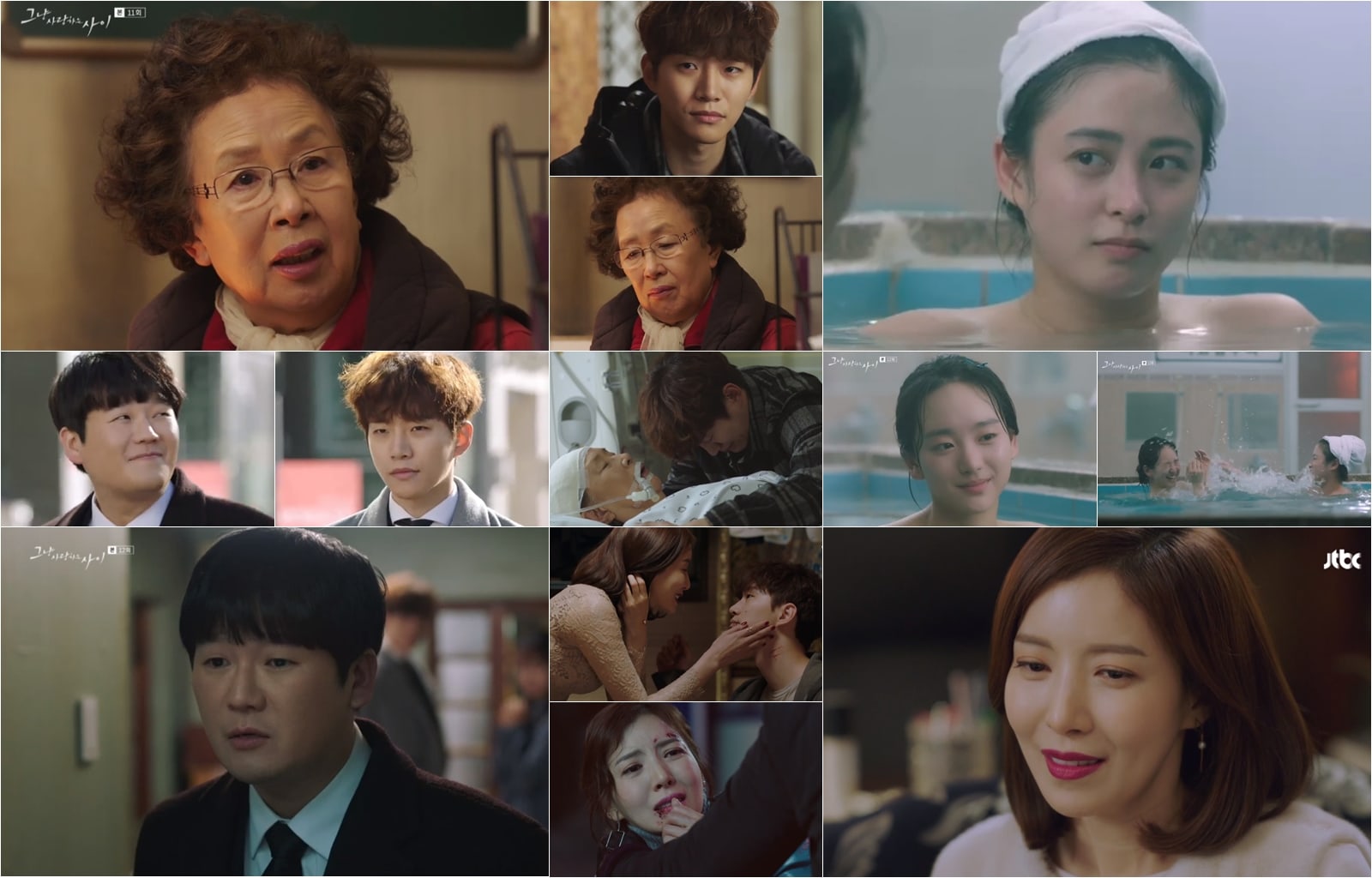 4 Friendships That Are Warming Our Hearts In “Just Between Lovers”

In JTBC’s Monday-Tuesday drama “Just Between Lovers,” the story revolves around the relationship between Kang Doo (2PM’s Junho) and Moon Soo (Won Jin Ah) as they share their pain and heal together. However, there are other friendships in the drama that are warming the hearts of viewers.

Director Kim Jin Won had once explained that the drama had been created to show how people heal from scars and help each other overcome difficulties. Here are four friendships in “Just Between Lovers” that show characters doing just that.

1. A Gift from God and the Compass of Life. Junho and Na Moon Hee

The bond between Kang Doo and Grandma was so strong that one almost forgot that they first met as a creditor and debtor. Though Grandma used simple words, they carried a depth that only comes from a long life lived and provided warm comfort to Kang Doo. She had been a rock that had helped Kang Doo keep standing and had been like a compass that has guided him through life.

For Kang Doo, Grandma was like the only gift left from God after the accident took everything away from him. So even when she was nearing the end of her life, she left him many things in the hopes that he could live a better life. She told him, “Live the way you want to,” and “Do your best to be happy,” worrying about Kang Doo till the very end and her warmth and love left a permanent mark on Kang Doo’s heart.

2. Soulmates who met during a time of despair. Won Jin Ah and Park Hee Bon

Moon Soo and Wan Jin (Park Hee Bon) are like soulmates and sisters who share everything about themselves with each other. Even though Moon Soo is used to pushing down and bottling up her pain since the loss of her sister Yeon Soo (Han Seo Jin), she seeks out Wan Jin whenever she has a problem. The reason why Moon Soo is able to open up to Wan Jin is because the two met during the lowest moments of their lives.

They first met in a hospital when Moon Soo was recovering from the collapse of a shopping mall and Wan Jin was recovering from a motorcycle accident. The two overcame their most painful moments together and that is why Wan Jin is someone Moon Soo feels comfortable talking to. Wan Jin also knows of Moon Soo’s forgotten past and all the pain she kept locked up. It is because they know everything about each other that it is when she was with Wan Jin that Moon Soo can be her true self.

3. Odd but pithy comfort, a flowery bromance between Junho and Kim Kang Hyun

Sang Man (Kim Kang Hyun), who always brings a smile to Kang Doo’s face with his odd and cute moments, is like a brother to Kang Doo. When Kang Doo was pushing Moon Soo away, Sang Man acted as the Cupid between the two, and his yearning for Kang Doo while he was away proved just how connected the the two were.

Sang Man often helps Kang Doo realize things and provides comfort with his odd but deep understanding of the world. Like Grandma, Sang Man is like a gift from God for Kang Doo. It was because of this that Kang Doo’s plea to Sang Man that, “You have to live longer than me,” after he finds out about Grandma’s brain tumor is more heartbreaking.

4. A savior and friend met at rock bottom, Junho and Yoon Se Ah

Kang Doo and Ma Ri (Yoon Se Ah) were like siblings who always helped each other out. Their first meeting was special. Ma Ri was being attacked on the street and no one was helping her. Just when she felt like she was going to die, Kang Doo was the only one who stepped in to save her. He stayed by her side to take some of the blows, and that’s when Kang Doo became a savior and friend to Ma Ri. When everyone was worrying about Kang Doo after Grandma’s death, Ma Ri was the one who believed in him and waited for him, saying that he’s not the kind of person to give up like that. Kang Doo and Ma Ri are cut from the same cloth as their hard exteriors hide a warm and caring center.

The production staff of “Just Between Lovers” said, “The characters are sharing the various emotions that form between them and using them to heal their wounds. The remaining episodes will keep following them as they heal and come closer together.”

“Just Between Lovers” has just four episodes left till it ends, and the next episode is set to air on January 22 at 11 p.m. KST on JTBC.

Which has been your favorite friendship in the drama so far?

Start watching the drama below.