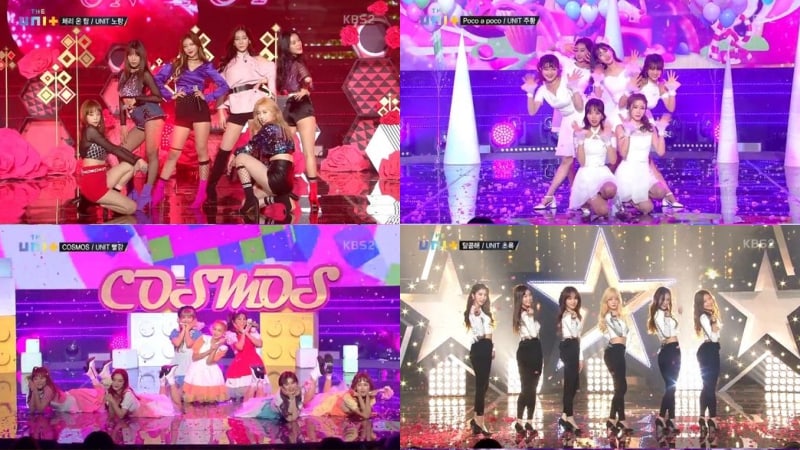 Following the male team performances last week, the female contestants on “The Unit” stepped up to perform brand-new songs for their fourth mission on this week’s episode!

The January 20 episode of KBS’s idol rebooting project “The Unit” featured the female teams competing for the opportunity to film a music video.

First to perform was the Yellow Team, comprised of Lee Bo Lim, Yena, Yoomin, Euijin, Semmi, and Haein. After dancing in 12 centimeter (approximately 4.7 inch) heels throughout their practices, they pulled off a great performance of Secret Weapon’s “Cherry On Top.”

Eujin took first place in the individual ranking after the performance, with Semmi, Lee Bo Lim, Haein, Yoomin, and Yena following in that order.

Next up was the Orange Team. Hyeyeon, Lucky, Yoonjo, Chahee, Somyi, and Yang Jiwon put on a cute performance of Duble Sidekick’s “Poco A Poco.”

The third team to perform was the Red Team, consisting of Hyosun, DanA, Viva, Heejin, Yebin, Kim, and Yeoeun. They performed MAJORIG’s “Cosmos,” a cute and bright song, and even held flowers as part of the choreography.

The individual results put Yebin in first, and Heejin, DanA, Yeoeun, Hyosun, Kim, and Viva followed in that order.

The Green Team followed with a sexy performance of Iconic Sound’s “Sweet.” Team members Nari, Anne, ZN, Euna Kim, Lee Suji, and Woohee were praised for their perfect rendition of the song and dance.

Finally, the White Team, comprised of Shin Ji Hoon, Yujeong, Jiwon, NC.A, Lee Joo Hyun, Lee Hyun Joo, and Serri finished with a great performance of Bae Soo Jung’s “Always.” Although the team was unable to choose the song they originally wanted, they were praised by the judges for their impressive vocal talents during their performance.

After all the performances, it was revealed that the White Team had placed first in the team results, with Yellow Team in second, Green Team in third, Red Team in fourth, and Orange team in fifth.

NC.A, who was on the winning team, remarked, “I think this is the first time I’ve cried tears out of happiness.”

Catch the latest episode of “The Unit” on Viki below!