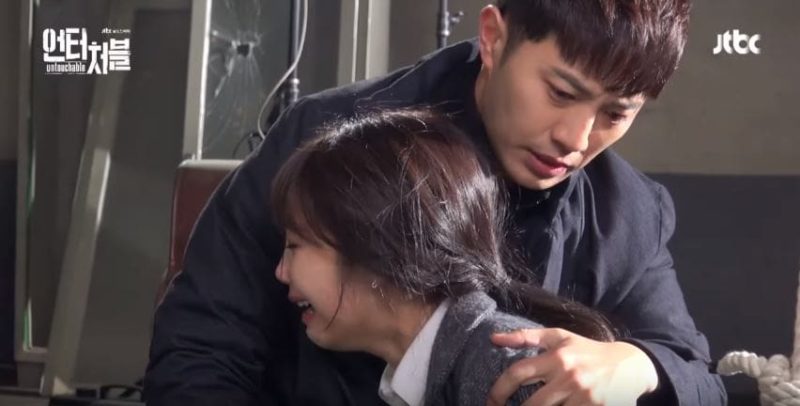 Watch: Jung Eun Ji And Jin Goo Put Their All Into The Last Scenes Of “Untouchable”

In the beginning of the clip, Jung Eun Ji is being bounded by her wrists and ankles. Despite her surprise, she tells a crew member to tie the ropes tightly around her in order to make the scene more realistic. Another production crew member warns him not to tie it too tightly that it will cut off her blood circulation, and she laughs while joking, “I might end up with edema later.”

The camera rolls, and Jung Eun Ji pretends to struggle and scream through the tape as the two actors playing the villains attempt to put a noose around her neck. The scene causes her to become emotionally overwhelmed, and she can’t stop tearing up even though that part is over. Despite her shakiness, she does her best to film the next part.

Meanwhile, Jin Goo prepares for the rescue scene by practicing with the stunt actors. The camera starts to roll once more, and Jin Goo wears a serious expression on his face as he pulls the trigger of the prop gun. A loud noise erupts, and the cast and crew can’t mask their expression of shock. Jin Goo, Bae Yoo Ram, and the crew re-watch the scene and they burst into hearty laughter at Bae Yoo Ram’s surprised expression caught on the video.

Last but not least, Jin Goo and Jung Eun Ji film the scene where he saves her and she sobs against him out of both distress and relief. He holds her with a pitiful expression, and the director of the drama can’t help but smile at their perfect acting. Once the filming is over, the director praises Jung Eun Ji for her genuine acting and tells her to go home and rest. The scene must have taken an emotional toll on the singer-turned-actor because she doesn’t stop crying for a while.

If you haven’t watched “Untouchable” yet, you can watch the first episode below.