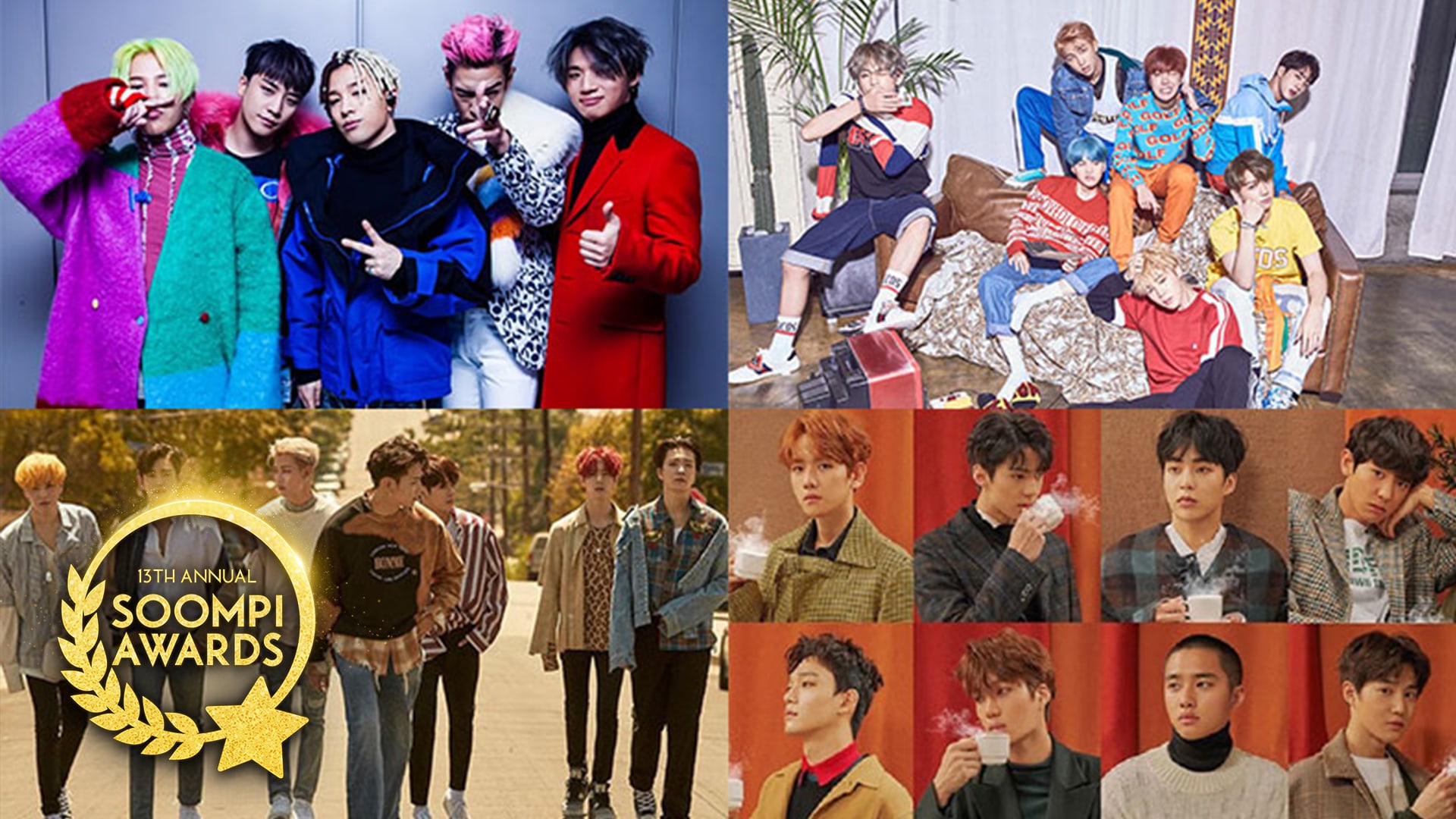 The 13th annual Soompi Awards are just around the corner and in honor of this occasion, we want to look into the nominees’ best moments from 2017. All of them are more than worthy of the Best Male Group Award, seeing as their qualities as artists and musicians are out of question, because obviously, every single one of them deserves the world. Now, without comparison and in alphabetical order; the most memorable moments of the nominees for Best Male Group in 2017. Let’s go!

B1A4 had BANAs more than excited by keeping their promise and releasing a new Korean album in 2017. “Rollin‘,” the title track of their 7th EP of the same name, was produced by Baro and Jinyoung, who is one of the busiest idol producers around. The EP debuted at No. 1 on the Gaon Weekly Album chart, making it the group’s seventh No. 1 album.

BIGBANG: A hard and yet optimistic goodbye

Four members of BIGBANG held their “The Last Dance” tour in Japan, which was completed with two final shows in Seoul, a tearful last goodbye for their fans before the members’ enlistments this year. Despite being words of farewell, the members’ last statements on stage were full of optimism and hope, and, most importantly concluded with the promise to return as a five-member group.

Block B: The return of their unique style

Everybody knows – Block B and crazy (hair) styles go way back. In the MV for “Yesterday” in early 2017, the boys all sported pretty normal haircuts and pretty normal clothes, lulling us into a false sense of security. But in late 2017, they released the MV for “Shall We Dance,” showing off truly bold styles – especially in terms of hair. Purple dreads with piercings for U-Kwon, a mullet for Kyung, an ajumma perm for P.O, and the most shocking part (besides Zico having relatively normal hair): they’re still very much able to pull it off.

BTOB had several meaningful moments in 2017, such as their “Piece of BTOB” project or the group getting their very first Bonsang at the 1st Soribada Best K-Music Awards. But probably their biggest goosebumps-moment was when they performed “Missing You” with a choreo that incorporated sign-language, accentuating the lyrics of the song. The combination of having a great song (which topped multiple major music charts), sweet choreo, and a powerful fanchant made “Missing You” a truly memorable comeback.

Looking at their global success, it is in fact hard to pick just one moment of BTS’s year, but several members themselves chose their Billboard Music Award for “Top Social Artist” as their favorite moment of 2017, so who are we to disagree with them? Their success in the U.S. media, their talk show appearances, their performance at the AMAs, and their chart ranking on Billboard’s Hot 100 – all of this shows their talent, hard working mentality, and the support of their fans, which the boys never cease to show their gratitude for.

DAY6: Their “Every DAY6” project

In December 2016, DAY6 announced their monthly release project “Every DAY6,” and what can we say – the boys did exactly what they promised. Releasing two songs every month in 2017, they kept their fans well supplied with great music and told a catchy story with a total of 12 MVs. With all the sudden teasers and comebacks here-and-there, DAY6’s releases were a very welcome constant to have last year.

EXO has been awarded Album of the Year at the 2017 Mnet Asian Music Awards, making this the fifth consecutive year for them to receive this daesang (grand prize), and marking the group’s 22nd daesang overall. That’s 22 acceptance speeches, all of them full of gratefulness towards their families and fans. But this year’s award was especially intense, with deep, meaningful words from the members, and a lot of tears. Chanyeol took several tearful attempts to say his part, showing just how much it meant to him and all members alike.

GOT7: Completing their trilogy and beginning a new era

In early 2017, GOT7 released the third and final album of their “Flight Log” trilogy, called “Flight Log: Arrival,” topping several album charts. They went on to release “My Swagger” and later “Turn Up” in Japan, all while Jackson had his solo debut with “Papillon,” and Jinyoung and JB made their long awaited comeback as JJ Project. Then, in late 2017, GOT7 began their new era by releasing “7 for 7,” containing many songs co-produced by members and leading the group to a more mature sound (if they’re not currently doing a “skurr” version of “You Are,” that is). Safe to say, it was a very busy and successful year for GOT7 and Ahgases alike.

BEAST’s transmission to a five-member group and leaving their label of seven years had many fans worried about the future of the group. But in 2017, after transferring from Cube Entertainment to their new label Around Us Entertainment, they debuted as Highlight with their mini-album “Can You Feel It?” and proved to everyone, that sometimes after an ending, there’s an even better new beginning.

For people who do not watch MONSTA X’s content regularly, the importance of their first win with “Dramarama” on “The Show” only became obvious after seeing the boys’ reactions. Monbebe, of course, knew that the group had struggled with not yet having won a music show and feeling like they were disappointing their fans. They even expressed this in their post-win interview, saying they were worried about being nominated, as they expected to just lose yet again. This was probably one of the most emotional wins of 2017, and a more than well deserved one at that. Congratulations, MONSTA X!

In January 2017, NCT 127 released their second mini album “Limitless,” the first release with new members Johnny and Doyoung. The boys promised fans to work harder than ever before as a nine-member group and make 2017 their year. Little did they know that with their next mini album and the single “Cherry Bomb,” they would officially prove to be the biggest hit on the stage of the June 22 episode of “M!Countdown” and earn their first music show win. It’s safe to say, NCT 127 kept their promise.

Yes, we know – writing about a lot of wins here, but how could we not write about the most meaningful moment for the groups themselves? For the members of NU’EST W, their first music show win on “M!Countdown” with their song “Where You At” meant a lot, as it had been the longest time since debut for a boy group to win. It had been 2,046 days since the members’ debut to be exact. That is a heart-wrenching record. If you’re going to watch this, you better prepare tissues. Congratulations, NU’EST W!

In 2017, SEVENTEEN took on the world in their very first “world tour” under the title “Diamond Edge.” Touring not only South Korea, Japan, Thailand, Hong Kong, Malaysia, Indonesia, Singapore, Taiwan, and the Philippines; but adding the United States, Canada, and Chile; the boys were met with an incredible amount of over 200,000 fans. Whether you’re one of the lucky 200,000 or not, be assured SEVENTEEN is grateful towards all of their fans for being able to see the world, just like S.Coups stated during their LieV.

In 2017, VIXX held their “VIXX V FESTIVAL” to celebrate their fifth debut anniversary. As a part of the celebrations, they released their fourth mini album “Shangri-La” with the title track of the same name. While the MV already looks undoubtedly breathtaking, the group’s performance at the 2017 MBC Gayo Daejejun was just jaw dropping. Performing a remix version of “Shangri-La,” all six members looked like they had just emerged from an animation, leaving fans and fellow artists staring in awe.

WINNER: Their success with “Really Really”

After the departure of Nam Taehyun in late 2016, WINNER returned as a four-member group in April 2017 with their single album “Fate Number For,” including the tracks “Really Really” and “Fool.” The album reached No. 1 on the iTunes charts of 21 countries and became the group’s most successful release to date. By December, “Really Really” reached 100 million streams without ever charting out of the top 100 in Gaon’s weekly chart, being the only 2017 idol group track to achieve this.

What was your favorite group’s most memorable moment in 2017? Let us know in the comments!

And don’t forget to vote for Twitter Best Fandom (voting is ending soon, at 8 p.m. KST) and Best Male Group (nominees below)!

daisygonzo can’t decide who deserves the award for best male idol group most, so she’ll just settle for cheering for all of them. See how her plan to finally move to Korea goes on Instagram.