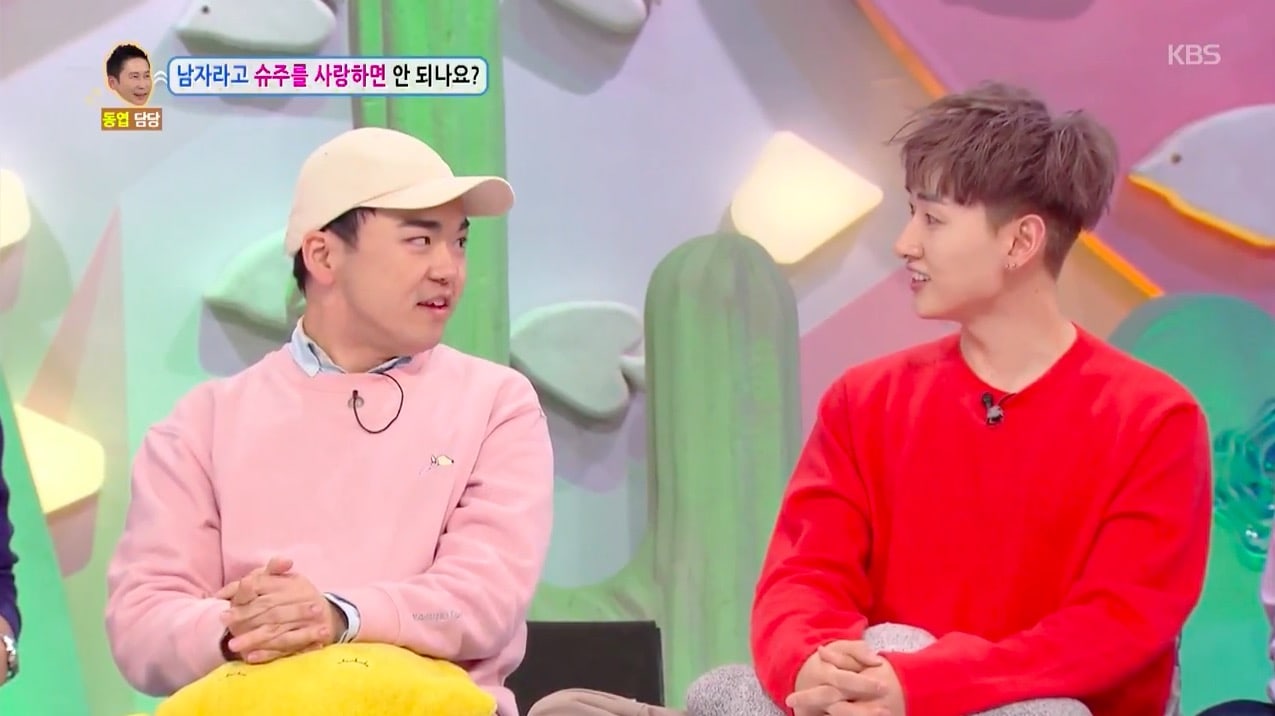 Super Junior Meets Their Male Fan Who Struggles Due To Prejudice

A big fan of Super Junior had the chance to meet some of the group’s members on “Hello Counselor” when he came on to talk about prejudice he experiences for being a male fan of a boy group.

The KBS show “Hello Counselor” invites ordinary citizens to write in about their struggles and worries in life, love, family, and more. If a person’s story is selected, they appear on the show and talk about their concerns. The panel of hosts and celebrity guests share their thoughts on their stories, and then announce whether or not they think it’s something to worry about. The audience also votes to determine which of the day’s stories is the biggest worry.

In the January 22 episode of the show, Super Junior members Yesung, Shindong, Eunhyuk, and Donghae joined the panel as guests. During the episode, the hosts read out a story written by a man in his 20s who has been a fan of Super Junior for 13 years. He wrote that he has been called crazy because of his interest in the group, and people have asked if he is homosexual.

When the man, named Song Jin Seok, came on set, he became shy when he sat down next to Eunhyuk, making everyone laugh over his adorable response. 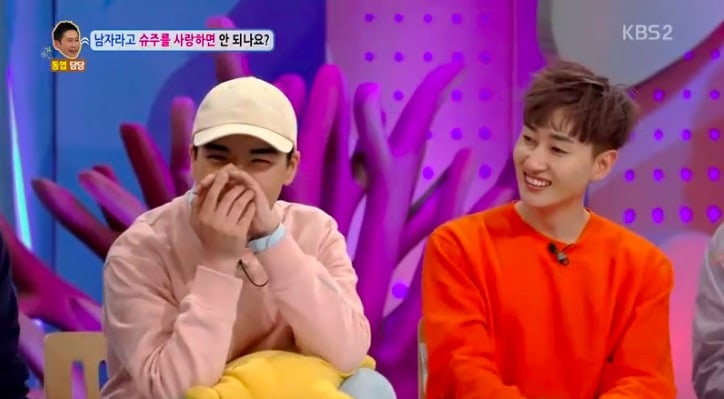 He shared that people ask him why he likes Super Junior when there are so many girl groups out there. When he was asked by the hosts about the most hurtful thing that’s been said to him, he replied, “I’ve been told that it’s disgusting.”

Song Jin Seok showed how big of a Super Junior fan he is as he talked about how he always goes to their concerts, and recalled their debut performance on “Inkigayo.” Song Jin Seok then thrilled Eunhyuk when he admitted that although Kim Heechul had been his favorite member at first, it’s now Eunhyuk. 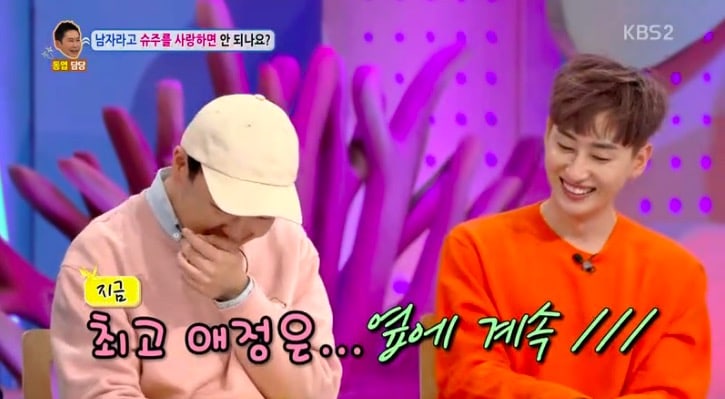 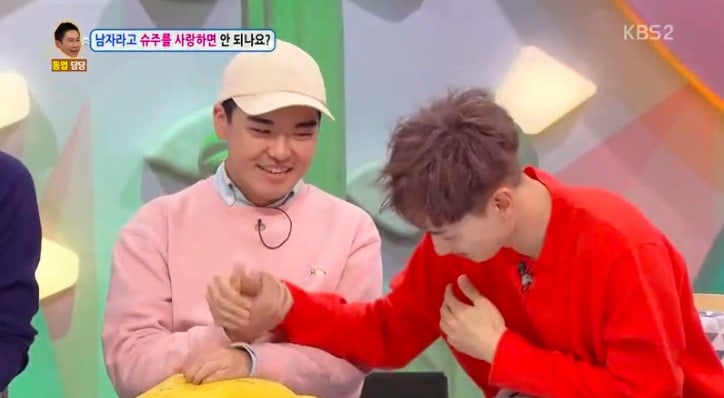 Friends of Song Jin Seok who were in the audience were asked about his love for Super Junior, and they confirmed that he goes to their music show performances, buys several copies of their albums, and has a large collection of their merchandise.

His friends shared their concerns about his interest, adding that he has a “feminine side” that shows when he does things like cover his mouth when he laughs and talk cutely. Song Jin Seok denied that he likes men, stating that he has had a girlfriend in the past.

When his friends said that he even dances in public when they’re walking around and a Super Junior song comes on, the hosts encouraged him to dance with Eunhyuk, and so the pair danced together to “Sorry Sorry” and “Mr. Simple.” 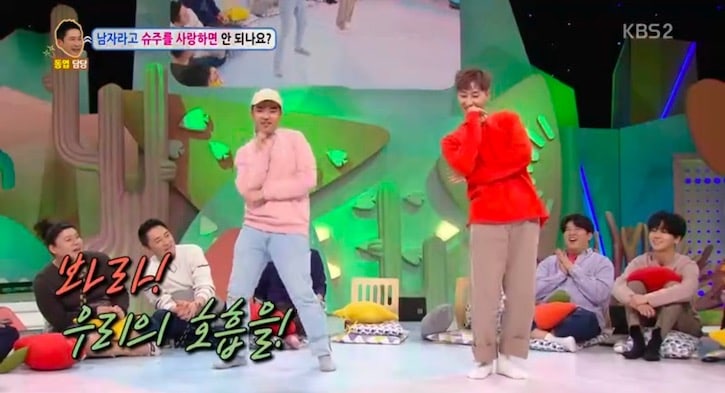 While his friends complained that he always asks everyone to listen to Super Junior’s songs and watch their videos when they make a comeback, Super Junior gave him high fives and thumbs up for his good work. 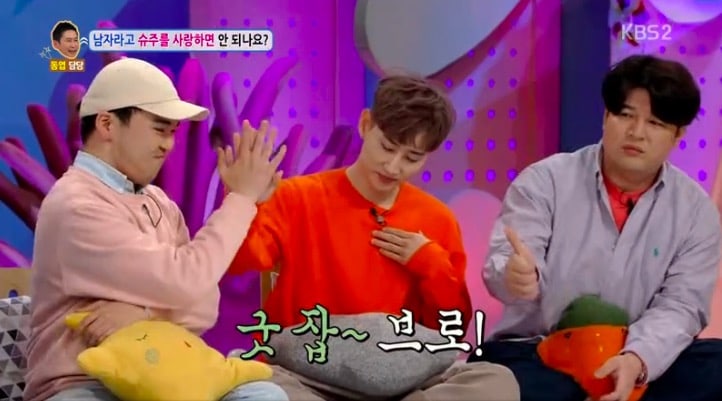 When asked if he’s experienced any positive effects of being a Super Junior fan, he replied, “There’s a lot. For example, Super Junior does a lot of events overseas, so I ended up deciding to learn Japanese in university.” He also shared that while he was obese in the past, he found inspiration to become a healthy weight while watching Super Junior videos, which helped him become more confident and positive.

Super Junior was asked if they thought his story was something to be worried about, and Shindong surprised the hosts by saying yes. “I think it’s a worry because a lot of people still don’t understand,” he said. “We have to work harder so that it’s seen as okay for even guys to like us. I think if we try harder it will be okay, but at the moment it still seems like a worry.” 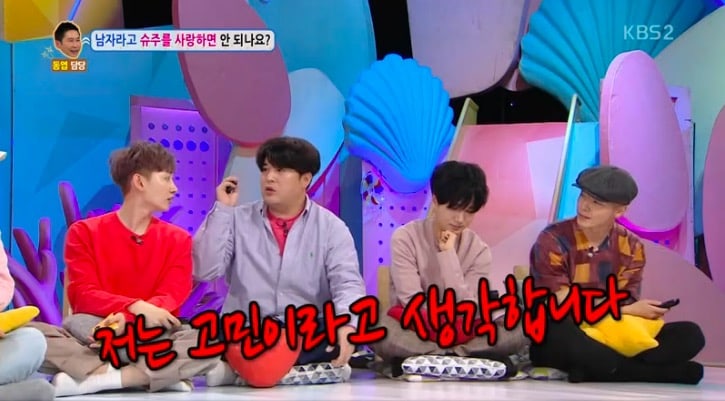 Super Junior
Hello Counselor
How does this article make you feel?