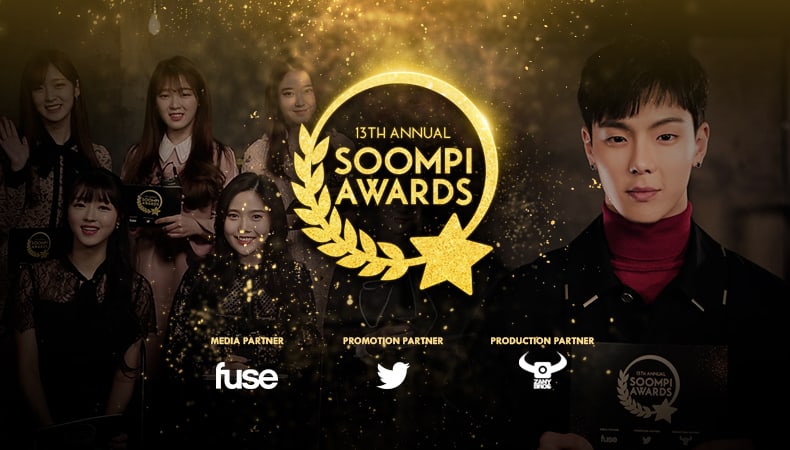 The Soompi Awards is the ultimate awards event that is completely decided by the tastes of international fans, celebrating the global reach of K-pop and K-drama. The nominees for the K-pop Awards are chosen from our Soompi Music Chart, a chart that takes into account the artists’ achievements on the top charts in Korea and their popularity on Soompi itself. The nominees in the K-drama Awards represent the best of dramas, variety shows, and actors in Korean TV in 2017 and are curated based on viewership in Korea as well as popularity on Soompi.

This year we’re going bigger and better – with special MCs and special guests galore. MONSTA X is returning to MC our K-pop categories, with Oh My Girl introducing our K-drama categories. Keep an eye out on Soompi’s official channels on Facebook, Twitter, and Youtube to live out the awards experience with them!

Fuse is returning as our Media Partner this year, along with top music video production agency ZANYBROS as our Production Partner. This year, we’ve also got something special in store for you – Twitter hashtag emojis! That’s right, we’re joining forces with the one and only Twitter so that every time you tweet #SoompiAwards, you will be able to see the official Soompi Awards logo!

Votes are limited to 24 times per category per day. Winners are determined based on the cumulation of web votes and Soompi Music Chart scores where applicable.

Want your favorites to receive a trophy and thank you for your hard work? Vote now! The 13th Annual Soompi Awards will run from January 23 to February 20.