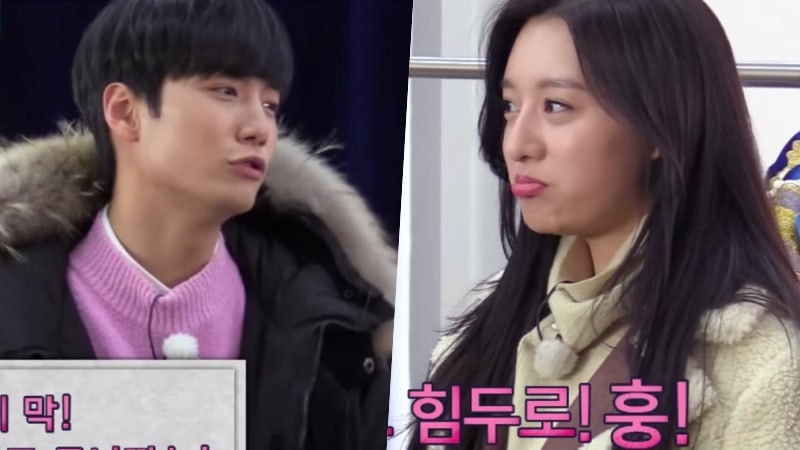 The latest episode of JTBC’s “Night Goblin” featured a guest appearance by actress Kim Ji Won as the cast traveled to hot places in Seoul.

The cast started in Itaewon, where they first met the actress. Before heading out to explore the streets of Itaewon, they came up with a game where two members would have to dress up in clothing from around the world. Kim Ji Won was tasked with choosing who would take on the challenge, and the cast was asked to appeal to the actress to not be the one selected.

NU’EST’s JR came up with the idea of replicating Kim Ji Won’s infamous aegyo scene from the drama “Fight My Way,” and the two people the actress thought did the worst would be selected for the challenge. The cast first got a lesson from the Kim Ji Won herself and they couldn’t stop smiling as they watched her reenacting the scene.

Next was JR, who did his best to put as much aegyo into his voice and movements as possible. Though he received a bit of a different reaction from the other cast members than when Kim Ji Won had done it, Lee Soo Geun still complimented him and said, “For a guy, that was pretty good.” Even Kim Ji Won said that he’d done well.

After all of the members tried out Kim Ji Won’s aegyo, she chose the worst two members. One was Lee Seoo Geun and the other was surprisingly JR. Unfortunately, when he had been bringing up the idea, he had mispronounced “Fight My Way,” which led to him being picked.

JTBC’s “Night Goblin” follows the cast every week as they visit various locations around Korea to try and be the first in line to experience the hottest foods and attractions. The show airs every Sunday at 6:30 p.m. KST.