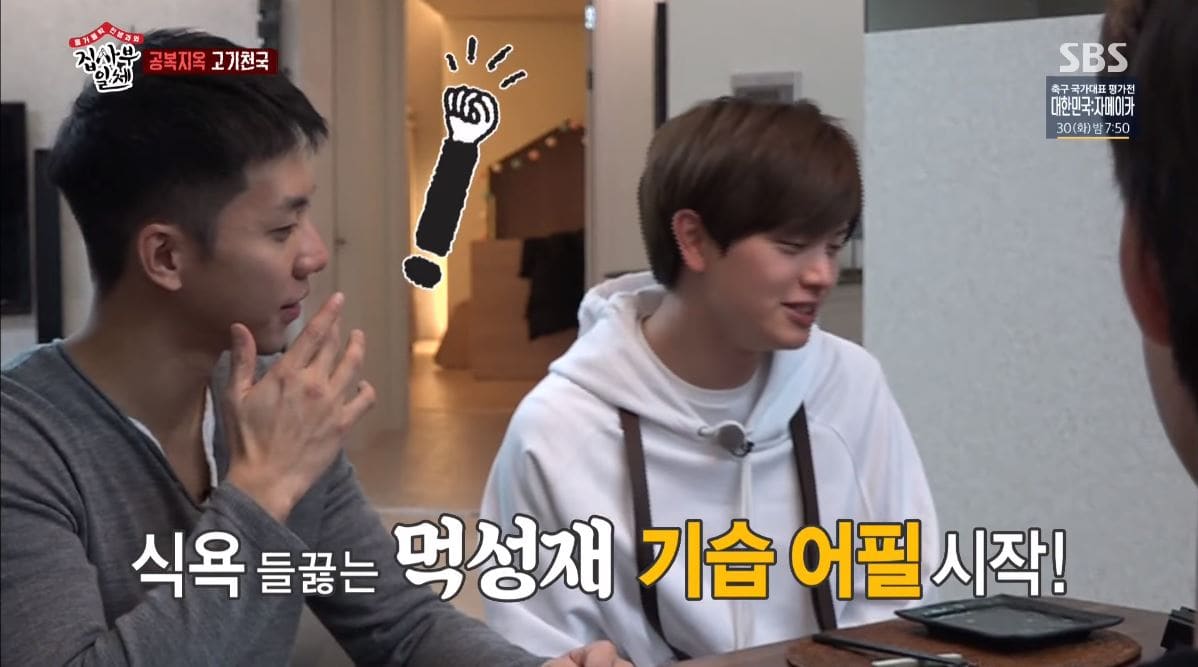 On the January 28 episode of SBS variety show “Master in the House,” Lee Seung Gi and BTOB’s Yook Sungjae sang their hearts out for meat.

The episode began as the members headed to their master and baseball player Lee Dae Ho’s house. After a whole day of hiking and hell-like training at the gym on an empty stomach, the four members were excited to hear that they would be eating meat at the house for dinner. Contrary to their meat party expectations, they found their dinner to be only a salad with two pieces of meat. As per the show’s rules, the cast members needed to follow their master’s daily routine, and Lee Dae Ho was currently dieting in order to shape up for the next baseball season.

After gobbling up all the food in seconds, Lee Seung Gi argued, “Aren’t we going to just throw away the rest of the meat?” and proposed a bet with a few pieces of extra meat as the prize. The four members decided that they would impress Lee Dae Ho’s wife and she would award the meat to whom she wanted.

Right away, Yook Sungjae snatched the first mini performance as he sang an extremely emotional rendition of “Missing You.” Lee Sang Yoon reenacted a heart-thumping scene from a drama with Lee Dae Ho’s wife as his counterpart, while Lee Seung Gi also sang his heart out with a verse from Deulgookhwa’s “Don’t Worry.” In the end, Lee Sang Yoon was awarded first place with four pieces of meat and Yook Sungjae second place with one piece of meat. They happily gobbled up the meat to fill their empty stomachs.

Watch the cast members’ performances below!

Lee Seung Gi
BTOB
Yook Sungjae
Master in the House
How does this article make you feel?