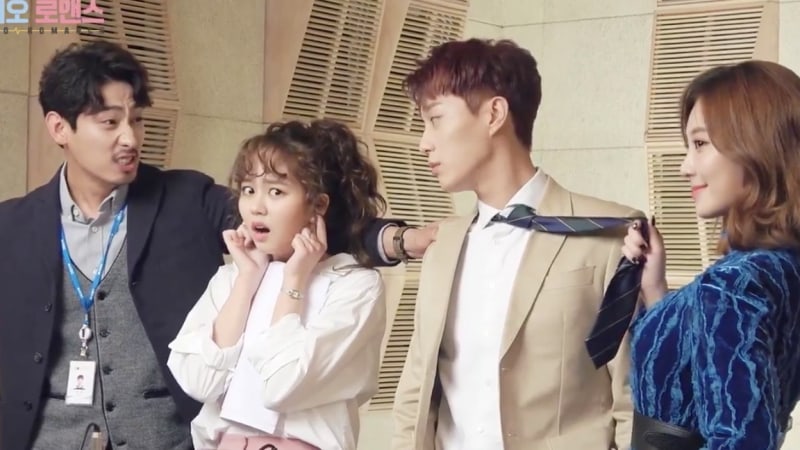 The cast of KBS’s “Radio Romance” can’t stop laughing in a new behind-the-scenes clip from the poster shoot!

The newly released video features Highlight’s Yoon Doojoon, Kim So Hyun, Yoon Park, and Girl’s Day’s Yura posing together for the poster of the upcoming drama. At first, the four actors are visibly awkward around each other, posing stiffly and forcing their smiles as they try to stay in character.

Finally, Yoon Doojoon breaks the ice by blurting out, “This is awkward. No matter how you look at it, this is awkward.” Yoon Park chimes in, explaining to the production crew, “This is only the third time we’ve met.”

However, their forced laughter soon turns into the real thing when Yoon Park, who plays Kim So Hyun’s terrifying boss in the drama, starts to fill the silence with random rambling. After Kim So Hyun tells him, “Please calm down,” Yoon Park ends up losing his cool and cracking up. “I can’t do this!” he exclaims, abandoning his character entirely.

Yoon Doojoon can’t help laughing either as he points out, “Your ears are really red!” Before long, all of the actors are in stitches as Yoon Park begins stammering his excuses.

“As always, [Yoon Park] hyung is the best,” remarks Yoon Doojoon, while Kim So Hyun worries, “What if we end up laughing in all of the photos?”

“Radio Romance” will premiere on January 29 at 10 p.m. KST. In the meantime, you can check out the teaser here: