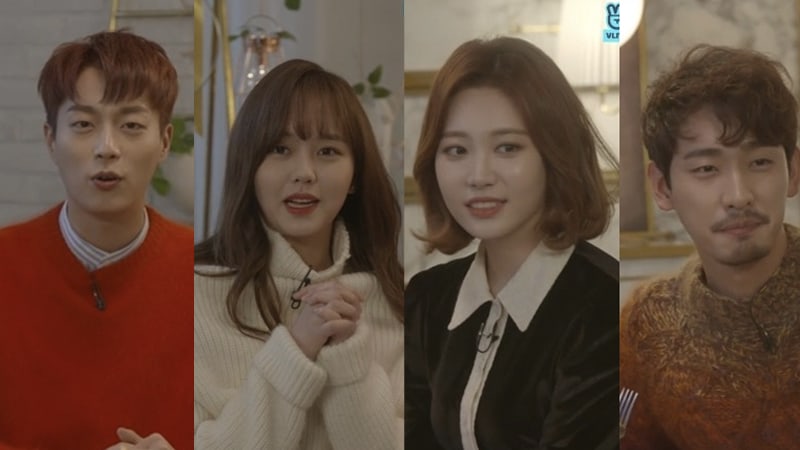 “Radio Romance” Cast Talk About Their Characters, Friendship With Co-Stars, And More

On January 29, “Radio Romance” cast members Yoon Doojoon, Kim So Hyun, Yoon Park, and Yura held a V Live broadcast where they chatted ahead of the drama’s premiere.

Highlight’s Yoon Doojoon was asked how his character, top celebrity Ji Soo Ho, is different from past celebrity characters in dramas, such as Chun Song Yi from “My Love from the Star” and Dok Ko Jin from “The Greatest Love.” He joked, “First off, the names are different.”

Yoon Doojoon went on to explain, “Ji Soo Ho is an even bigger star than Highlight. He has a fresh yet pitiful aspect about him. I think it will be fun if you can empathize with the anguish that super star Ji Soo Ho goes through.” Yoon Park agreed by adding, “Ji Soo Ho has an incredibly heartbreaking side about him.”

Girl’s Day’s Yura explained that her character Jin Tae Ri is another a pitiful star, saying, “She succeeded as a child actor in the past and wishes to make a comeback.” She laughed as she added, “It’s sad.”

Yoon Park introduced his character Lee Kang by saying, “He carries around a pointer as an executioner would his knife.”

In response to a question about what they wanted to do most if they became radio DJs, Yura answered, “I’m reminded of skipping out on a live broadcast, which is what happens in one of the drama’s episodes.” She went on to say, “I want to invite listeners in to play games and listen to their stories.”

The MC also asked, “What do you call each other since you are all different ages?” The members explained, “In order of experience, Kim So Hyun is the most experienced so we call her ‘teacher.'”

Kim So Hyun commented, “We have a group chat, and they all call me ‘teacher.’ I’m thinking of leaving the chat room soon.”

After observing the members, the MC noted, “The four of you don’t seem to be very close yet,” and Yoon Doojoon joked, “We became the closest today.”

Watch the trailer for “Radio Romance” below!