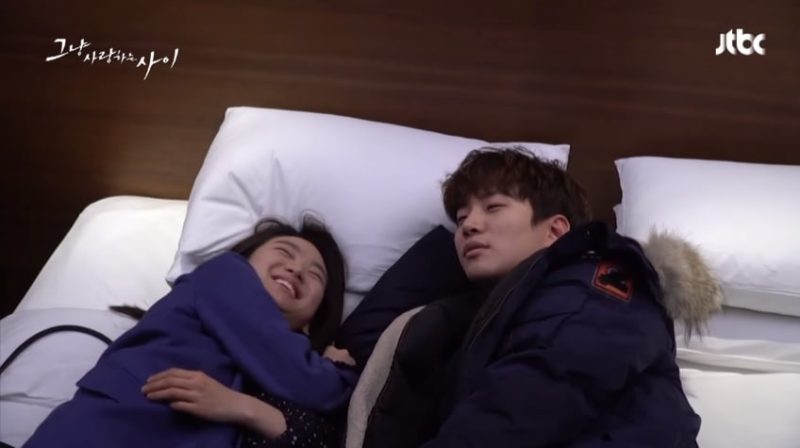 In the video clip, the two of them show off both their professional and silly sides. During filming, they perfectly immerse into their characters, but once the director shouts “cut,” they’re back to joking and laughing with each other.

In one scene they have to redo, Junho sees Won Jin Ah’s stylist instead of Won Jin Ah and jokes, “Who are you? Where’s Moon Soo [Won Jin Ah’s character]?” The cameras roll again, and Won Jin Ah and Junho are acting to the best of their abilities when the strong wind disrupts them by making her hair fly all over the place. Once the director yells “cut,” they can’t help but burst into laughter.

At last, Won Jin Ah and Junho start to rehearse for the hotel scene. While waiting for the production crew to finish setting up, the two of them casually lay next to each other and comfortably talk about various topics. As soon as filming starts though, they go back to being the lovey-dovey couple on screen.

Also, watch the first episode of “Just Between Lovers” below.